This posting (and the next) both deal with Chaucer reception. I had originally conceived of these posts as a single entry but I've decided to split them into two separate ones. 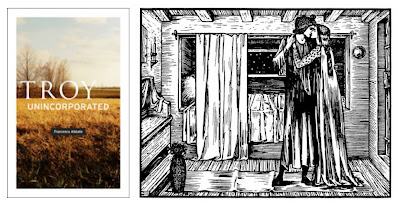 If the previous post by Karl is any indication, it's now the time of year when many of us our planning our syllabi for the spring semester. I'm devising a new upper-division literature course called "Epic and Romance," and I'm seriously considering assigning this new book that has just been brought to my attention [h/t Lisa Cooper!]. Even if it turns out I can't manage to squeeze this onto the syllabus this time around, I have already made the book the first item on my own personal reading list.

Francesca Abbate's new book Troy, Unincorporated (University of Chicago Press, 2012) is a modern-day "refraction" of Chaucer's Troilus and Criseyde. Set in the unincorporated town of Troy, Wisconsin, this series of lyric monologues re-imagines Chaucer's tale of love and betrayal.

I provide the complete blurb from the publisher's website (you can also flip through a preview on Google Books):

A meditation on the nature of betrayal, the constraints of identity, and the power of narrative, the lyric monologues in Troy, Unincorporated offer a retelling, or refraction, of Chaucer’s tragedy Troilus and Criseyde. The tale’s unrooted characters now find themselves adrift in the industrialized farmlands, strip malls, and half-tenanted “historic” downtowns of south-central Wisconsin, including the real, and literally unincorporated, town of Troy. Allusive and often humorous, they retain an affinity with Chaucer, especially in terms of their roles: Troilus, the good courtly lover, suffers from the weeps, or, in more modern terms, depression. Pandarus, the hard-working catalyst who brings the lovers together in Chaucer’s poem, is here a car mechanic.

Chaucer’s narrator tells a story he didn’t author, claiming no power to change the course of events, and the narrator and characters in Troy, Unincorporated struggle against a similar predicament. Aware of themselves as literary constructs, they are paradoxically driven by the desire to be autonomous creatures—tale tellers rather than tales told. Thus, though Troy, Unincorporated follows Chaucer’s plot—Criseyde falls in love with Diomedes after leaving Troy to live with her father, who has broken his hip, and Troilus dies of a drug overdose—it moves beyond Troilus’s death to posit a possible fate for Criseyde on this “litel spot of erthe.”

Francesca Abbate is an English professor at Beloit College; read more about her experiences and the inspiration for her book here. This promises to be an exciting read, and I look forward to finding out how Abbate engages with the Chaucerian text. It intrigues me not just as a piece of Chauceriana, but as (in the words of Barbara Berman) "the work of an academic/artist making the old new, making contemporary experience into something alive, one would wish, for a very long time."

* My sincere apologies to any ITM readers who saw the original posting which erroneously misidentified the town in question as Troy, Michigan. (I attribute this mistake to a late-night conversation over Facebook: one of my colleagues was saying she wished the book were set in Troy, MI, instead - until I informed her that there is indeed a real unincorporated town in Wisconsin called "Troy" and that the author herself lives and works in Wisconsin.)