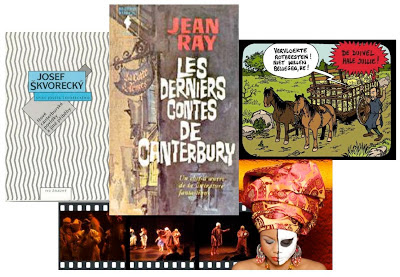 My previous posting offered a blurb on a new adaptation of Chaucer's Troilus and Criseyde. Francesca Abbate's Troy, Unincorporated (2012) transports the medieval tale to a modern setting (unincorporated town of Troy, Wisconsin) and gives also gives the story a new form: it becomes a series of lyric monologues in modern English sections prefaced by an epitaph in Chaucer's own Middle English.

This artistic interest in "making Chaucer anew" -- or fusing the new and old -- is an enduring phenomenon. Indeed, there's a long and rich history of Chaucer adaptation and re-appropriation in American culture writ large. Candace Barrington's American Chaucers (2007), for instance, has traced how aspects of The Canterbury Tales have been adapted and re-purposed to in a surprising range of American contexts including anthologies, plays and pageants, and children's literature. And a number of medievalists -- Steve Ellis, Tom Prendergast, and Stephanie Trigg, to name a few -- have examined Chaucer's manifold adaptation and translation (in all senses of this word) into modern English-speaking contexts well beyond the US. Cultural Studies of the Modern Middle Ages (2007), ed. by Eileen, Myra Seaman, Kimberly Bell, and Mary Ramsey, features (among many things) an excellent cover image of Chaucer "busting out of the frame" of an old portrait into a brand new digital realm. And David Wallace's Presidential Address at the New Chaucer Society (NYC 2006) offered an early hint of where a wider Chaucerian reception history -- and scholarly engagement with online sources -- would be headed (see the discussion of "New Chaucer Topographies" in Jeffrey's ITM posting).

But what of Chaucerian adaptations into new contexts outside the English-speaking world? How might a turn to non-Anglophone appropriations of Chaucer offer new ways of re-thinking Chaucerian narratives or otherwise reorient how we think about the relationship between the world we now inhabit and materials from the distant (English) past?

Candace Barrington and I are happy to announce we are joining forces in an attempt to answer these questions. Specifically, we are launching an (admittedly ambitious) project called Global Chaucers: its ultimate mission is to examine Chauceriana from outside the Anglophone world, with our first step being to identify and catalog all post-1945 non-English adaptations of The Canterbury Tales. Candace announced her interests in a "global Chaucer reception project" during her talk at the New Chaucer Society in Portland earlier this summer, and after her presentation I informed her that I had been thinking about a similar endeavor for quite some time (but didn't know how to start). Over the past few months, we have been working together – with the help of colleagues in many locations – to gather information on modern Chaucerian adaptations in languages other than English. So far, we've identified adaptations in (Mandarin) Chinese, Czech, Flemish, French, German, Esperanto, Nigerian pidgin English, (Brazilian) Portuguese, and (Bolivian) Spanish; and these adaptations take many forms: short stories, poem collections, comic books, and dramatic performances. We want to begin the process of gathering information about these works together in one place and also help to facilitate broader, more informed discussions of Chaucer reception across different cultures.

Here's a little blurb about the project (excerpted from grant proposals we've been writing):

Simply put, the Global Chaucers project asks what we can learn by engaging non-Anglophone appropriations of Chaucer. As scholars working with Chaucerian reception have long recognized, modernizations demonstrate how the poet's difficult alterity and canonical cachet combine to create a chameleon text suitable for adaptation to multiple concerns and values. Other medievalists have noted Chaucer’s awareness of his own “belatedness” in his own time; that is, he understood he was a poet inventing a new literary tradition in English in the wake of more prestigious Latin, French, or Italian models. The work of cultural adaptation that Chaucerian material serves in postcolonial contexts – areas where “new” nations are articulating a sense of identity that is both informed by and resists more powerful cultural models – is a potential point of contact between Chaucer’s own period and post-1945 settings.

On its broadest level, this project sets the stage for theorizing circuits of translation in creative and more nuanced ways. For instance, post-Chaucerian adapters working in French, Flemish, or Italian can end up almost transforming Chaucer “back into” the original non-English sources he engaged. Reorienting Chaucer’s own French-derived work via modern French adaptations might suggest a new understanding of the “place” of French in Chaucer’s own time. When an amateur linguist adapts Chaucer into an artificial language like Esperanto (by definition a “new” and invented tongue), does this mean he must create archaisms and back-formations? When a living playwright creates a song and dance adaptation of The Miller’s Tale in Nigerian pidgin English, how does she accommodate an ethnically diverse Anglophone audience with disparate frames of reference? The Global Chaucers project, in other words, has the potential to generate questions that we have not yet asked – or even knew that we could ask.

For more information on the goals and aims of our project, see the Global Chaucers website!

At this point, we are hoping to identify any ITM readers who might wish to participate in the project. If you've discovered a non-English work of Chaucerian adaptation and would like to tell us about it, please email us at this address. If you have skills and interests in a particular language and would like to get involved in translation or offering an analysis of a non-Anglophone Chaucerian adaptation, please let us know.

We hope that the Global Chaucers website will become a resource and a community for people with interests in Chaucer reception -- and we'd welcome participation from anyone who would like to get involved.
Posted by Jonathan Hsy at 9:27 AM

Prolific Chinese writer and "translator" Lin Shu (who did not know any foreign language) produced a great number of translators of Chaucer's tales between 1917-1925 (serialized and also published in single volume book form); I have a chapter on Lin in my book Chinese Shakespeares (Columbia). Michael Hill has published a whole book on Lin (http://www.amazon.com/dp/0199892881). Lin seems to be a logical place to start for your project.

Alex: Excellent. Thanks for introducing me (and Candace) to Lin Shu's work, and also for letting us know about Michael Hill's book! It was fun to chat a bit about Lin Shu with you earlier today, by the way ... So very interesting that he would render foundational Western works into Classical Chinese. It would appear he does this to the other "retold" works too, and in especially in a Chaucerian context turning those tales into an antiquated style makes some sense. But the choice of a formalized, non-vernacular style would also seem to run counter to how we (Anglophones) are used to thinking about the role of Chaucer: as "vernacular founding figure" in literary history.

This is an incredibly exciting project and one that will prove a real boon to everyone who teaches Chaucer.

I am truly looking forward to seeing this project take flight, and if I come across anything in my current Icelandic research, I'll be sure to let you know!

On a related note, a friend of mine once told me that Mongolians think rather favorably of Chaucer because of his depiction of Chinggis Khaan in "The Squire's Tale." She discovered this while on vacation over there. I'm not sure if this popularity has led to any written works, but I'll definitely check and see. In the meantime, it might be of interest that Chaucer's description of Chinngis is engraved on the steps of the National Museum in Ulaanbataar: http://adrianbarlowsblog.blogspot.com/2012/06/mongolia-chaucer-and-chinggis-khaan.html.

@Eileen: Thanks for your support! We really do hope that this project will open up new possibilities for teaching Chaucer - as well just being something that's, well, really cool.

@Leila: If you do come across any Icelandic materials, let us know! And I love this point you make about the perception of Chaucer in Mongolia, and I appreciate that excellent link. I wonder if that museum staircase inscription is just in Middle English, or is there a translation too? (It's wonderful, in any case.)