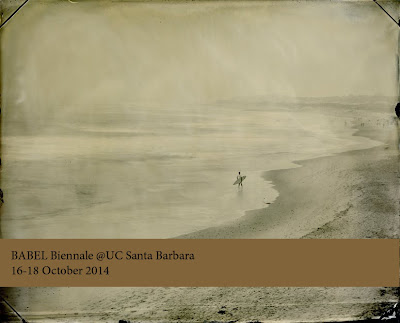 
Whenever I find myself growing grim about the mouth; whenever it is a damp, drizzly November in my soul; whenever I find myself involuntarily pausing before coffin warehouses, and bringing up the rear of every funeral I meet; and especially whenever my hypos get such an upper hand of me, that it requires a strong moral principle to prevent me from deliberately stepping into the street, and methodically knocking people’s hats off—then, I account it high time to get to sea as soon as I can. ~Herman Melville, Moby Dick

I am thrilled to announce that BABEL will be holding its 3rd biennial meeting, "On the Beach," at the University of California, Santa Barbara, in October 2014 [likely, Oct. 16-18, but we are still haggling a little bit over specific dates]. On the beach, the site of beginnings and ends, of distinct forms of indistinctness, where the ground is always moving under our feet and the horizon is always vanishing, is where we want to turn to certain questions, problems, opportunities, and dangers that cycle around the ecological and the institutional, and all the ways in which the two are entangled.

Our meeting will situate itself (materially and thematically) along the fractal shoreline of the Pacific Ocean in Santa Barbara, a town named after the patron saint of miners, artillerymen, explosives, and lightning. In the spirit of such rogue-ish and transitory confraternities of pirates, smugglers, saints, pyro-artists, rebels, and surfers, and following in the spectral footsteps of the after-party stragglers and wastrels of La Dolce Vita stumbling into the early morning light of a bleached-out Fellini-esque seascape, where they are caught by the gaze of a dead stingray snared in a fishing net, we will gather on the beach to explore together the question of what it means to be stranded and how the beach itself (writ large as Beach) might serve as a new Academy of Thought, where thinking would emerge from lively (if also messy and uneasy) collaborations between whales, surfers, clouds, waves, starfish, grains of sand, swimmers, lagoons, saints, coral, marshes, divers, dunes, skiffs, ports, sharks, etc. Our aim will not be to find a site of clear demarcation between water and earth, shore and sea, sand and sun, inside and outside, sky and cloud, human and nonhuman, past and future, University and Real World, work-time and play-time. Rather, we will seek to cohabit a turbulent site of entangled encounter, of weathering and advancing into the weather: a place of “formal inexhaustibility” where trans-corporeal bodies flow into and collide with each other, caught within and moving along eddies of emergence, erosion, and what Vicki Kirby calls “life at large” (“there is no outside of Nature”). At the same time, we will note that we are outside and we will ask what it means to be outside, exposed to the elements and the elemental, to think but also to feel a beachy Outside.

Between now and June 10th, we would like to ask for proposals for sessions, and in July we will issue a call for individual contributions. To see more about how the meeting is being envisioned and more specific details about session proposals, go here: