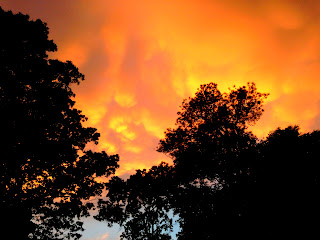 First, a necessary apology: the Elemental Ecocriticism symposium late last week at the University of Alabama (sponsored by the Department of English and the Hudson Strode Program in Renaissance Studies) was so replete, jam packed, overflowing, teeming and cornucopial that no amount of writing about it on my part can capture more than a fragment. On the second day of the proceedings, the previous day already seemed a week behind us, so rich had been the offerings. Others, I hope, will add to the bare story I offer here. Let me start, though, by thanking Sharon O'Dair, the event's amazing organizer, as well as everyone who presented, pitched in, and otherwise enabled ignition.

Cary Wolfe inaugurated the symposium Thursday evening with a keynote derived from his new book, an exploration of biopolitics, posthumanism, and ethics in world within which, wherever you draw your moral line, some future will prove that "you will have been wrong." Cary had a great line about his own ambitions that seems to me to encapsulate the "Elemental Ecocriticism" project initiated by "Ecomaterialism": a critical thickening of relations not anchored in a quest for ontological truth status but propelled by a desire to see what is opened up, what is made possible by unfolding and proliferation. He also stated that in his view medievalists and early modernists are extremely well suited to collaborating in such a project because "their raw materials are kind of insane."

Lowell Duckert began the symposium proper the following morning with a presentation that mapped the "mines of flight" generated by coal -- relations as complicatedly evident in Paradise Lost (where the fallen angels quarry Hell's Hill shortly after arrival) as in contemporary West Virginia, his home, where mountain top removal is a controversial technique for coal extraction. Pointing out that "mine" indicates possession as well as place, Lowell articulated a mineralogical mode of living with [or coalitions] built upon prospect (defined as a looking forward towards multiple futures, not all of them anthropocentric or anthropogenic). Focusing upon spontaneous generation, Karl Steel explored how some things (vermin, crawling creatures) come from nothing -- or, rather, directly from cold, dry matter. This "ungrammatical" stuff yields ungrammatical vitality, "unpaternal" life, an originary noise-matter-life indifferent to human divisions and sortings. Valerie Allen explored how a cosmos that is best represented mathematically (thereby rendering feeling at home within it difficult) might be rendered apprehensible through other media. Taking the vortex (which I only just now realized is Latin for eddy) or torus as her central figure, Valerie staged through a series of "gropings" (emphasizing the embodiedness of that Middle English word) the sustained, existential turbulence of dwelling within a movement-system beyond totalized view. Vortices are and represent that which is "violently unnaturally natural, coming from left field even when we see them coming."

My talk was structured like a reverie: recursive, coming back to the same site repeatedly (a ship is spotted among the clouds) but in a way that builds a temporally enfolded archive (I ended with the middle). My aim was to thicken ecological relation, just as imagining sky as sea does. Julian Yates, in the only presentation with an interrogative title ("Wet?") detailed how elements are not just materialities, but metaphor magnets. Looking closely at the death of Keats, one whose name was writ in water, who drowned on dry land (TB), and whose grave is not water but granite, Julian brought us to the "zoo-bio-bibliographic" ooze that is both slimy decay and coming into life, where drowning a book means not giving up so much as canceling out a sovereign system and enabling more mobile, more vital inheritors. The day ended with dinner, taking pictures of presenters with a small stuffed monkey atop their heads, and late night drinks at an outdoor bar with a cage in its middle.

Sharon O'Dair began the final day of the symposium with a hilarious and insightful exploration of the many valences of mud: from the clear as mud thinking that supports the New Historicism to the relentless mudslinging that characterizes the controversy over unhistoricism and queer theory in the early modern period (not surprising, Sharon observes, because "through the application of mud one builds turf"). She wondered what is so bad about being bogged down, and offered a repeated toast of "here's mud in your eye" (while drinking a mimosa). Making a plea for the abiding importance of nonexistent things, Steve Mentz traced the history of phlogiston: an error, but also a perpetual ignition. Steve mapped some "Phlogisticated Thinking" to argue that the loss of phlogiston marks the loss of a powerful mode of narrating fire, "illuminating its twisting, living within flammability." Through four "fire names" he traced lost intimacies and fire stories to yield some "smoldering conclusions," much of which helped to move beyond the metaphor / materiality impasses native to speaking about the elements. Anne Harris continued along the fire road with her brilliant observation that fire is a latecomer: there is no fire in Eden, and it does not come into the world until a fiery sword guards that garden against return. Insisting that within elemental ecocriticism fire must be a living creature of changing forms, Anne used the Tower of Babel to convey how fire is at once destructive and strategic. She then showed how it materializes itself into substances like glass, how some humans become glass-like through their own awareness of madeness, and ended with the pronouncement that "We are fire's doing." Chris Barrett closed the day with a history of ether, a substance thought to fill the empty spaces of the cosmos (a function now taken up by dark matter). She revealed the intimacy of ether to a dark and violent history in which its levity (its ability to make people silly) impedes its use as an anesthesia during the Civil War, and wondered how dire laughter might resound within our presently dark moment of ecological crisis.

We then departed for dinner at the Stroud Hudson house, deep in the woods. As we sat outside and waited for everyone to arrive, we posed around the statuary and I captured the image of sunset that illustrates this post. We then ate, drank and danced together until very late in the night. 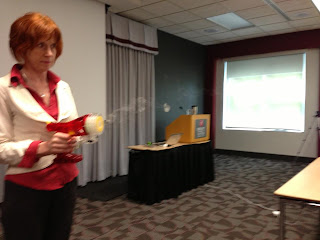 The symposium was, as I said, far richer than my skeletal account can indicate. The performances were as poetic as they were erudite. Because Elemental Ecocriticism is the second iteration of a collective project for seven of us, the presentations had multiple convergences (though those by Anne and Chris, the two newcomers to the group, always already belonged; we did miss Stephanie Trigg and Alf Siewers, though). I also noticed that the symposium featured numerous innovative performance techniques: Valerie brought modeling clay for us to make our own vortices and a smoke ring gun; Sharon used her mimosa as a prop and structured her paper around toasts; Steve had us ignite matches and watch the process of burning; Chris blurred repeating images into her slide show to great affective effect. My own attempt at something other than quotidian "text and image" PowerPointing was a self advancing series of moodslides: images of cloudscapes I've taken during my wanderings over the past three or four years, to acknowledge the emplacedness of my thought as well as the influence of varied but particular skies on its shaping.

Lowell and I went through our symposium notes together and attempted to map convergences of theme, since some day we will be co-editing these presentations into a collection of essays and we will have to introduce them somehow. Here is the word cloud we generated (not via computer, but through pens, notebook pages, and conversations during and after the event). We start with "vortex" because that word for a perilous-beautiful structure of motion-filled enfoldment seems so well to capture the emergent form of the project -- and recognizes the fact that our symposium was held exactly two years after a tornado demonstrated its elemental force around the campus where we convened. 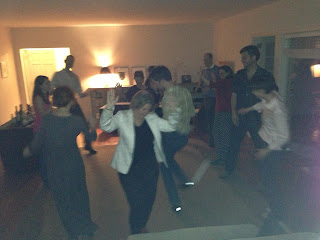 Posted by Jeffrey Cohen at 3:17 PM

Great narrative re-telling and word-cloud: as Anne said on that other blue world, it makes me miss Tuscaloosa already.

I'll have some sentences to throw into the fire soon. Thinking about essences & elemental calling...

Jeffrey: love that word-cloud that you and Lowell produced at the end. What's going on with the dashes vs. asterisks?

The dashes enchain certain words into a closely related cluster; the asterisks separate these clusters (but gather them as well). The structure is roughly vorticular rather than cloudy I suppose -- so a word vortex. Or attempt at one.

Some of those enchained word-clusters read as beautiful poetry!

and "matterphor" would count as a word poem, or as one would say on twitter:

(h/t to Chris Piuma for the #pwoermd hashtag.)

Make sure you read Steve Mentz's account of the symposium as well!