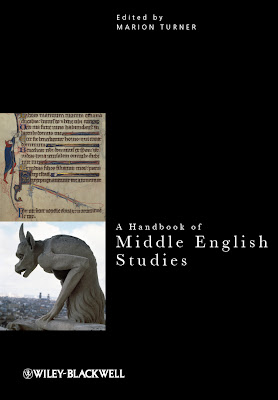 Hello, lovely ITM readers! It has been a while since I posted anything new here, so I'm just chiming in here to report on a few mind-expanding collaborative endeavors going on these days. First, read Eileen's posting about the amazing Critical/Liberal/Arts BABEL shindig to be held next Friday, April 19, at UC Irvine. Also, check out Jeffrey's follow-up to the "Ecologies of the Inhuman" Symposium hosted at GW last Friday, and the interrelated threads that have already begun to light up the blogosphere. Note that some of the folks who just participated in the "Ecologies" Symposium at GW -- by some cosmic coincidence! -- also happen to appear in the most recent issue of postmedieval (this issue is entitled "Ecomaterialism," edited by Jeffrey and Lowell Duckert; download everything for FREE during the month of April!).

Finally -- in the spirit of collective endeavors -- one more exciting announcement: A Handbook of Middle English Studies, edited by Marion Turner, is now officially available in the US. This quite an assemblage of contributors -- including many well-known medievalists as well as newer voices (oh by the way Jeffrey and I both appear in this collection *ahem no self promotion here ahem*). I'm quite pleased to see the introduction makes a nod to postmedieval, and it reflects on some of the ways that Middle English studies continues to engage with (and, I might add, intervene in) different modes of critical theory. With no further ado, here's the guest posting!

A Handbook of Middle English Studies

This week sees the publication of the latest volume in Wiley-Blackwell’s Critical Theory Handbooks series: A Handbook of Middle English Studies. I edited this volume, so the ITM bloggers have kindly allowed me to write a guest blog to tell readers about the book. I’m really excited about it, and not only because the cover [above] is incredibly stylish (I always judge a book by its cover). The contributor list speaks for itself: Aranye Fradenburg, Anke Bernau, Elizabeth Scala, Nicola McDonald, Glenn Burger, Steven Kruger, David Lawton, Jeffrey Jerome Cohen, Susan Crane, Vincent Gillespie, Joyce Coleman, Alex Gillespie, Jessica Brantley, Julie Orlemanski, Maura Nolan, Tom Prendergast, David Matthews, Bob Mills, Isabel Davis, Laura Varnam, Jonathan Hsy, Corinne Saunders, Carolyn Dinshaw, Kathy Lavezzo, Laura Ashe, John Ganim, Geraldine Heng. I have learnt a huge amount from these essays, and have been lending the book to students since the day my advance copies arrived; they have been wonderfully enthusiastic and inspired by the essays – Nicola McDonald’s ‘Gender,’ on romance and performativity, has been a particular hit.

The concept of the book is that the essays are all interested in methodology, in how we use theory to interpret texts; they all overtly deploy and reflect on theoretical perspectives, ranging from Miller on thing theory (Brantley) to Aquinas on beauty (Nolan), to Agamben on class and sovereignty (Davis, Mills) to Morton on ecology (Dinshaw). The essays are accessible to students, but are also essential reading for advanced scholars – they are all research-based, rather than overviews, and they break new ground. To give you a couple of examples: David Lawton’s wide-ranging ‘Public Interiorities’ piece makes a crucial intervention in debate about the ‘Prioress’s Tale’; Geraldine Heng’s interpretations of the Sultan of Babylon, Mandeville’s Travels, and Barlaam and Iosephat challenge us to use new modes of reading to interpret texts in their global contexts. The essays cover areas that have long been of interest to literary critics, such as authorship, postcolonialism, sexuality, and genre, while also addressing areas that are relatively new in medieval studies, such as ecology and animality. This collection also aims to interrogate the time and the place of the Middle Ages, through essays on periodization and globalization, and to emphasize the particular relationship that medieval literature has to modern theory, both through the specific circumstances of its manuscript culture, and through the influence of medieval thought on modern theory.

The Handbook contains 26 essays, which is quite a lot for an edited collection, but I’m not claiming it is comprehensive: there are other topics I wish I had been able to include (the commissioned Disability essay could not be completed, due to circumstances beyond the contributor’s control). But I hope it both gives good coverage of a range of topics, offering a kind of idiosyncratic map of the field, and gives a snapshot of the kind of work that some of our most brilliant critics are currently doing. The book is divided into three sections, on Selfhood and Community (interiority, the self in society; performance; intersubjectivity), Constructing Texts, Constructing Textual History (how texts come about; what they’re made of; how and why they survive), and Politics and Places (moving outwards, spaces, structures, landscapes).

You can see the table of contents HERE and the preview comments HERE. I hope lots of you are able to access the book soon – though I know that many of you won’t be able even to think about buying it until the paperback comes out.  I’m sorry that the hardback is expensive, but hopefully libraries will stock up on it.  Meanwhile, you can access the introduction HERE, and the first essay, Fradenburg’s ‘Imagination’ HERE. I’d love to hear what you all think.