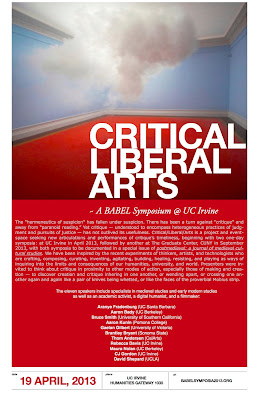 
What are the new scenes or spaces of critical invention? What different faces might critique have? What does it feel like? What does it do? How does historical consciousness play a role in generating new forms, tools, or ideas? What does it mean to be “uncritical”? Is there an erotic hermeneutics, pace Sontag, or an eros of critique? How do we engage criticism and art and techne against the actuarial interests of the corporate university? Can we “afford” to nurture speculative creation, or pure science, in an age of austerity? Do delight, rapture, or the drift of daydreams have a role in criticism? Is there value in maintaining what separates the injunctions to critique and to create? How might our practices cross-pollinate the sciences and the fine arts? Or politics and aesthetics? Or the future and the past?

I'm excited to announce that our program for the BABEL Working Group's 1-day symposium, to be held at UC Irvine next Friday [April 19th], Critical/Liberal/ Arts, has been finalized [co-hosted with great generosity by the English department, Group for the Study of Early Cultures, and Multi-Campus Research Group w/Shakespeare at UC Irvine, with great thanks, especially, to Julia Reinhard Lupton, Elizabeth Allen, Rebecca Davis, and Beryl Schlossman].

If you are in the southern California area, you should join us for what promises to be an enlivening series of conversations and performances on the entangled relations between creativity, critique, activism, and the liberal arts [and you can pre-register HERE]. Speakers include medievalists [Aranye Fradenburg, Brantley Bryant, Gaelan Gilbert, Rebecca Davis, Maura Nolan], early modernists [Bruce Smith, Aaron Kunin, CJ Gordon], an Africanist/activist/public intellectual [Aaron Bady, The New Inquiry], a new media specialist [David Shepard, HyperCities], and a filmmaker [Thom Andersen] -- and hopefully, by the end of the day, these so-called "disciplinary" markers will be complicated all to hell. Topics will include Shakesperean futurism, brain plasticity and neuroeducational research, imposter syndrome, disobedience and the University of California, sense experience, philological community at the end of empire, the filmic exploration of an unseen Los Angeles, charity, the fiction of the digital humanities, and MORE. See the full program HERE.

Hopefully, if you're in the area, we'll see some of you, and for those of you on the other side of the [American] world, we'll be staging a second Critical/Liberal/Arts symposium at The Graduate Center, CUNY, on Friday, September 27th, featuring: Ammiel Alcalay, Jamie Skye Bianco, Hollow Earth Society [Ethan Gould + Wythe Marschall], Bruce Holsinger, Eleanor Johnson, Erik Sommerfelt Steinhoff, Allen Strouse, Henry Turner, Michael Witmore, and Marina Zurkow. YOWSA.

Proceedings from both symposia will also eventually form a special future issue of postmedieval. Over and out.
Posted by Eileen Joy at 2:47 PM