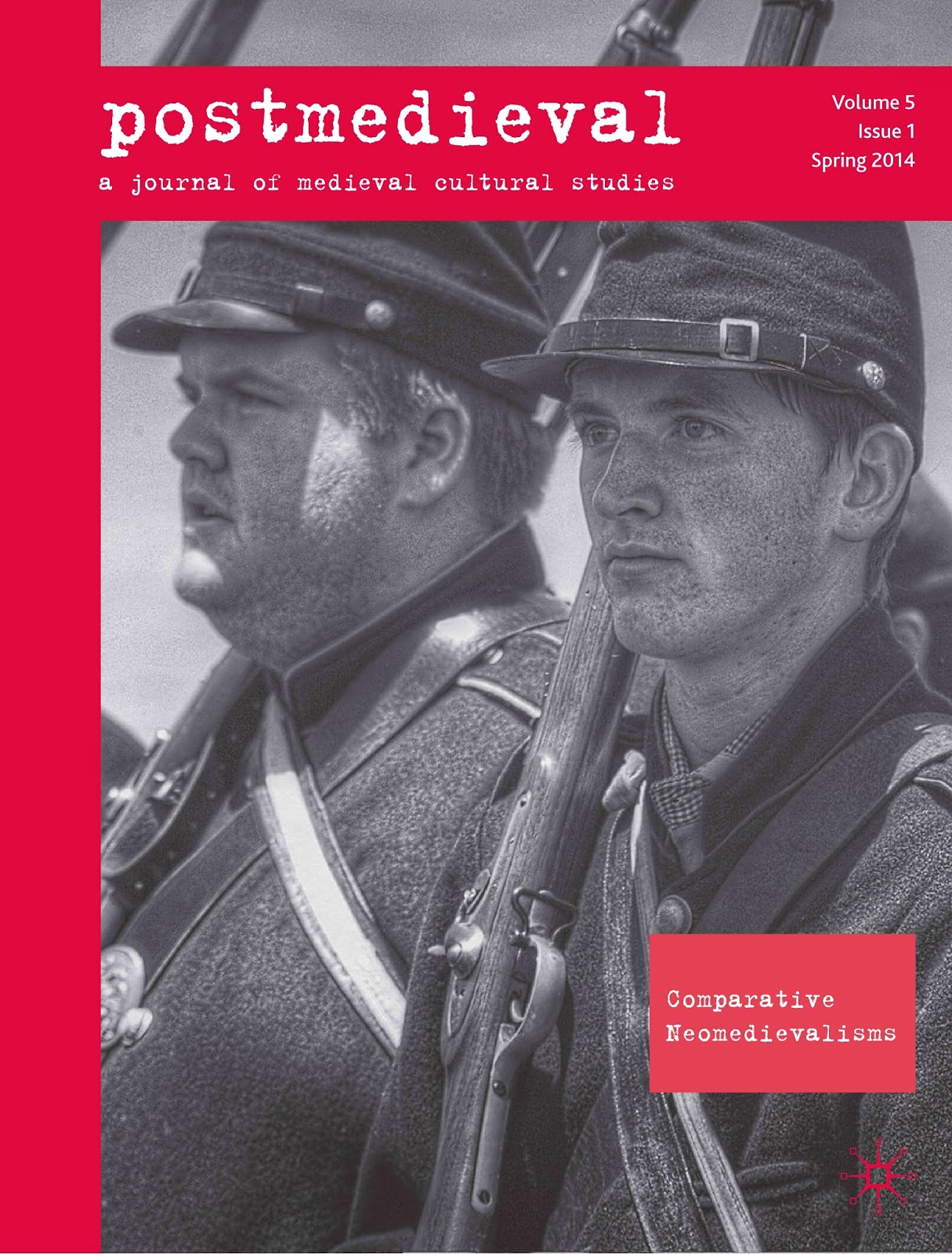 I'm really excited to announce the publication of the first issue of postmedieval's FIFTH volume [5 years! We made it to the almost-end of grade school ... or something like that]. I'm really happy about this issue because it displays all sorts of creative approaches to the subjects of the "Middle Ages" brought into contact with contemporary objects, discourses, groups, events, persons, methodologies, etc. The Table of Contents also reveals a real diversity of genres of writing, from the more traditional essay or article [i.e., Jonah Westerman's article on The Life of Daniel the Stylite in conversation with with Patricia Miller’s work on ‘visceral seeing’ and ascetic performance and Melanie Klein’s psychoanalytic conception of subject formation] to the speculative [Matthew Bryan Gillis imagining what might happen if Augustine's Confessions were viewed as a horror tale written by H.P. Lovecraft] to short fiction/ficto-theory [Robyn Cadwallader's "Heurodis Speaks," speaking of which: a HUGE congrats to Cadwallader for having her novel The Anchoress picked up by Faber & Faber in the UK and Farrar, Straus and Giroux in the US!].

The issue begins with a cluster of 4 essays [+ an Introduction], edited by Daniel Lukes on "Comparative Neomedievalisms," addressing the productive errancies of the neomedieval fantasies of Don Quixote, the neomedieval terrorism of Norway's mass murderer Anders Behring Breivik, the "collapse" of the medieval into the modern in T.S. Eliot's play Murder in the Cathedral, and the neomedievalist and anti-feminist dystopia of Margaret Atwood's The Handmaid's Tale. In his Introduction to the cluster, Lukes writes,

There are generally understood to be two types of neomedievalism. One is the International Relations (IR) school that stems from the 1970s work of Hedley Bull. It centers around the idea that nation-states are weakening in the face of non-state actors (NGOs, multinationals, supra-national entities such as the European Union, global networks, private armies, terrorist organizations and so on), and that the global order is entering a medieval-type scenario of layered political allegiances: one in which the nation-state ceases to hold privileged sovereign power. The second type derives from the work of Umberto Eco, who (also in the 1970s) put forward the notion that we are living in cultural and political new Middle Ages, citing the end of the ‘Pax Americana’ (Eco, 1986, 76) as an analog to the fall of the Roman empire. Neomedievalism for Eco is a postmodern predicament by which the contemporary can be understood as a re-enactment of the medieval, spanning a spectrum from the historically accurate and philologically responsible to pop kitsch fantasy medievalism. Over the last decade, neomedievalist studies have found fortune in the realm of pop culture, in particular examining online videogames set in pseudo-medieval fantasy worlds, often by way of Baudrillardian theories of the simulacrum.

Debates proliferate, particularly on the pages of Studies in Medievalism, about the nature of neomedievalism as an academic discipline and its relation to more traditional medievalisms: Is neomedievalism a medievalist subgenre, or a different field altogether? Does neomedievalism do something that medievalism doesn’t, or is it like the fake medievalisms it analyzes, itself a kind of faux medievalism? If so, would that be a bad thing? What has medievalism done to deserve the birth of a sub-field that appears to mimic it mockingly, substituting its rigorous quests for textual authenticity and historical accuracy with a gleeful, playful irreverence? Or, is that dichotomy itself a neomedievalist essentialization of the work that medievalists do, especially of those well versed in postmodernism and invested in bringing the medieval into the present? Can neomedievalism help itself from trivializing the medieval? Is it a kind of jester at medievalism’s court, telling truths through taboo jokes? Is it a punk medievalism that ‘borrows creatively from the old matter’ (Risden, 2010, 58), often without putting in the actual work of medieval textual exegesis? Is it a ‘dumbing down’ or a ‘democratization of medieval studies’ (Coote, 2010, 30), curtailing or softening the traumatic otherness required of reading the actual medieval? Is it, as Karl Fugelso has suggested, a nihilistic anti-medievalism, attempting to substitute a nothing for serious scholarship and defending ‘artificial borders that diminish medievalism without establishing valid alternatives’ (quoted in Clements and Robinson, 2012a,191)?

Is it perhaps a child? As Terry Jones observes, we discover the Middle Ages early in life, via ‘the world of the fairy tale … a world with which we become familiar with our first exposure to literature’ (Clements and Robinson, 2012b, 390–391). Are we then neomedievalists before we are medievalists – if we are to take the definition of neomedievalism as a medievalism that has dispensed with a historical or accurate relationship to the Middle Ages, and has instead accepted a primarily culturally mediated one? This would be a mode which looks not so much to the Middle Ages, but to medievalism for inspiration. The fantasy pseudo-Middle Ages of Tolkien’s Middle Earth or fairy tales are just that: stylized Middle Ages made through the selection and re-organization of medieval fragments (themselves also fabricated) to construct new wholes. Eco calls this process rabberciamento (patching, tinkering; Eco’s translator William Weaver renders this as bricolage) (Eco, 2012, 1099): the act of grabbing and patching from the Middle Ages to construct something old and new, familiar yet alien.

Neomedievalism looks to the future, unravels time and disrupts teleology, makes new the old, celebrates the impossible, makes mockeries of truth, privileges beauty, shuns responsibility, feels ashamed of its lack of respect for the historical Middle Ages, and distracts and enchants with improbable and absurd assemblages – and yet, all of these seductions can be critical. There are many areas yet to be mapped: the literary science fiction neomedievalisms of feudal, post-apocalyptic and steampunk worlds (Dune, A Canticle for Leibowitz, Riddley Walker), dark fantasy manga (Berserk, Claymore), popular music (mittelalter-rock, goth/industrial, and metal, Chaucer and hip-hop), theories of the ‘techno-image’ and the new visual literacy (Vilem Flusser) and managerial strategy (Kingdomality). Our essay cluster hopes to indicate some possible further directions for neomedievalist studies at the intersections of politics, aesthetics, literary studies and cultural criticism . . .

In addition to the essay cluster and the 3 additional pieces cited above (by Westerman, Gillis, and Cadwallader), all of which were also published online in 2013 as part of Palgrave's new [and terrific] Advance Online Publication program, this issue also features a review essay by Glenn Burger, "Towards a Premodern Affective Turn." MOST EXCITING of all is that, since March is Palgrave's Access All Areas month, all of the content of this issue of postmedieval is downloadable for FREE. Check out also our commentary on the cover image of this issue HERE.

And speaking of the fact that postmedieval is now entering its fifth year of publication, and with no small assistance from all of its incredibly hard-working and inventive guest editors [very special THANKS go to: Stephanie Trigg, Craig Dionne, Karl Steel, Peggy McCracken, Jeffrey J. Cohen, Cary Howie, Helen Dell, Louise D'Arcens, Andrew Lynch, Jen Boyle, Martin Foys, Julie Singer, Lara Farina, Holly Dugan, Jane Chance, Antony D. Passaro, Lowell Duckert, Laurie Finke, Martin Shichtman, Kathleen Kelly, Anna Klosowska, Holly Crocker, and Kathryn Schwarz!], we will be throwing a big party at the Kalamazoo Congress on Friday, May 9th, from 9pm-midnight at Cityscape in downtown Kalamazoo, to celebrate 10 years of BABEL and 5 years of postmedieval, and EVERYONE is invited. There will be champagne, and some people will be wearing tuxedos.