Maura Coughlin, Asa Mittman, Lora Webb and I went beachcombing for BABEL 2014: we are participants in the beach walk/flash exhibition listed as 15 and 16 on the program. This super-sized panel was broken into smaller groups by the organizers, who asked us to figure out how to share an investigation into littoral materialities and sea-side composing. We decided to share the images of some beachcombed objects with each other, and invite our co-participants to create stories for them. Here's a montage of what we combed: 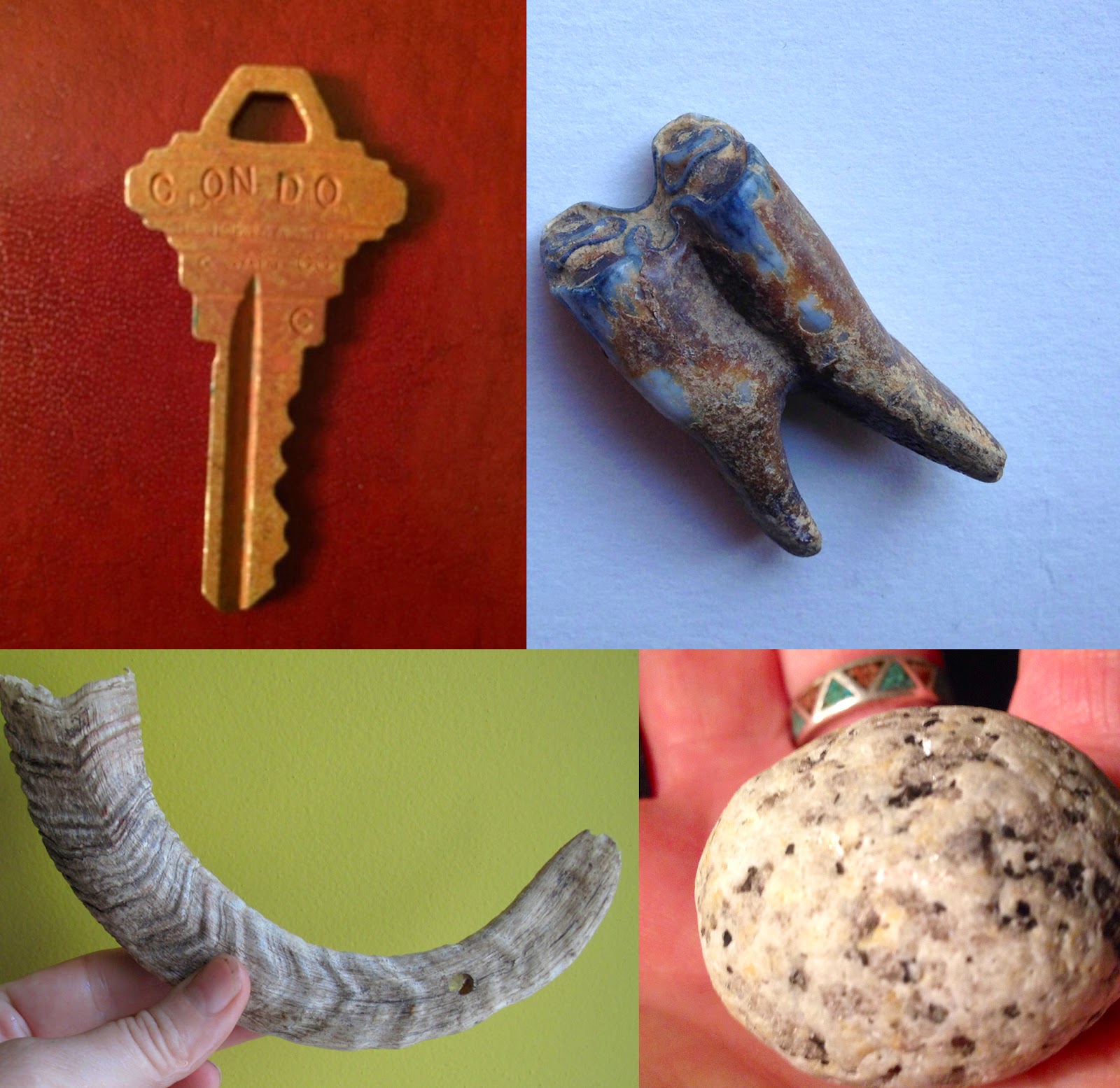 And here are our personal descriptions of the item, sorted according to their background color in the montage above:


And here are the tales we told.

MAURA
4.
You may see me as a solid granite egg, yet I am of many things: quartz and feldspar and several others.  I am peppered and salted.  I am of the earth—the bedrock of the continent.  I was molten; I have been through processes of metamorphosis and am but a fragment of what was once much greater. I have been moved by glaciers and dashed by waves until I was tumbled almost round.  I will be something else again, perhaps sand for a time. Jeffrey was not the first human to select me. I was picked up on a beach once and because of my shape I spent a time in a hen house, a false nest egg coddled and warmed by one broody hen after another. Later, many woolen socks were mended over me.  I fell away unnoticed from a sewing basket one day on another beach as the woman who then kept me waited for a boat to return.  With the movement of a few tides, my grey woolen casing slipped off and, for a time,  I rejoined the granite of the seashore. This man who speaks of stone found me, took me from the shore, and prized me for my shape.  He placed me in his hand, tasted salt on me, holding me a bit too close to his lens so that my crystals went soft in his image as if a salty tear, a memory of the sea, washed his eye.
2.
After she breathed her last, I had taken the large pliers from their leather sheath and ripped one molar from her jaw, just as the old woman had instructed.  The brutal cracking and rending seemed an abject violation, despite the coldness and immobility of Fiona’s once vibrant form.   It was hard to believe that my favorite horse could be remade from this one tooth, but in my grief I was willing to try almost anything to get her back— an animal like that only comes into your life once.  I cleaned it as best I could, but her years of grazing on the scrubby margins of London had left an almost impermeable patina on the enamel. I caught a chill that night, wandering the banks of the Thames, searching for the gypsy encampment where I might find that woman again. In the drizzle and fog, several small campfires I came upon illuminated groups of Roma but none admitted to knowing her; just as I was about to give up I found a brightly painted caravan lit up by the biggest of all the fires that night.  Drunken artists playing gypsy.  After several cups of bohemian gin, I began the long walk home, cursing my misplaced faith in remaking and other such quackery.  I felt for the tooth in the pocket of my grey overcoat and found only a hole: it was gone.
1.
Hey, Beachcomber: Pick me up.

I’m worth it. Look, I was a brass key when that really meant something. Brass. No stars or leopard print or any of that stupid shit.

You had to be cut back then, held up to the original, proofed for fit. It mattered. I was a blank, then the old guy dragged himself to the back of the hardware store and ground me down.

Tell me a plastic card has the charm. Tell me you can wear that piece of trash on a chain around your neck or leave it under a rock by the beach for that woman you sent the letter. So what if she never came. You get what I’m saying?

Can’t you see that I’m the REAL THING? Just pick me up— my lock still works… I know it. I can feel it.

LORA
2.
I have spent much of my life submerged in wet places. First gathering calcium and dentin buried in the blood and bone of a young jaw. When my crown had formed and my enamel was hardening I shoved aside the puny baby tooth that blocked my path. I erupted from itchy, achey gums ready to be truly alive. Sadly, the life of a tooth is not one of excitement. We are the tools of the jaw, the first (and I think most crucial) stop on the road of digestion. Our only adventures are new foods. When my job was done, I sat idle in the warm moist mouth with only my siblings and the tongue for company. There was a steady stream of liquid through the mouth the night I came loose. I’m not certain what happened but I was hit hard. I felt my ligaments crack and break. With gush of blood I slid out of my spot in the gums and under the tongue. Then suddenly I was forced from the mouth and falling through the cold air. I landed on something soft and of a similar warmth to the mouth. From there I was slid into a pocket. A dark, soft place with one warm side and one cold side. I was beginning to realize that I was loosing feeling when three fingers found me. Suddenly I was flying. With a plink I hit water - cold, rushing water. I was swept along quickly as I sank. Just as I was considering what an interesting experience I was having, I began to feel less and less of it. I was dying. By the time I finally settled on the river floor I was a dead tooth. As the sediments covered me, I turned blacker and blacker.
Years and years passed under the mud, and trash, and water of the Thames before a current from a speeding boat unburied me. I washed ashore much changed from my last time above water. I am now graying and covered in brown — dirt? minerals? — brown something. I was once so shiny and white. I spent a few days lying on the bank drying out when the tide went out and welcoming the return of the wetness when it came back in. And then new fingers picked me up. I was held in a different hand and then put into another pocket, which was much the same as the first.

4.
In the beginning, I was much larger. I was born in the hot depths of the earth. Cooling slowly, I became solid, white, and speckled. I was a layer of the earth for a long time until the ice came, gouging a hole through my middle and splitting me into huge boulders. I became we. We traveled together beneath the sheet of ice, becoming smoother and rounder as we rubbed against one another. By the time we reached the sea we were with many other stones - some white like us, some reddish, some very gray. The ice plunged us into the sea before melting away. Years and years passed and I was rolled back and forth, back and forth in the water, I became smaller and rounder, smaller and rounder. With every storm, we were mixed more and more with the other stones. Some times I would end up far out to sea, other times I would be washed ashore. I've been picked up by human hands many times. People admired my roundness, my whiteness, but they always put me back, or balanced me on one of my fellow stones, making tiny, ephemeral towers. But the last person kept me and took me away from the sea. For now, at least, I no longer roll with the other rocks and the waves.
3. 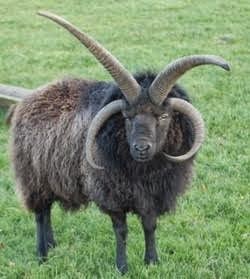 I am one of a rare set of double twins. My twin and I I could have been many hairs, but we were strong horns. Twisting and turning fibers of keratin, we sprouted from the head of a young Hebridian ram who grazed in the fields near the sea. Our bigger brothers lived on the top of the head and were far showier, but my twin and I were the rarer second set of horns. When he was young and strong, our ram won many battles with us on his head. When he grew old and weak we stayed bright and beautiful and when he died and rotted all away we remained. Long after the ram's death a man parted us from his skull. I don't know why he drilled into me, but it must have been a mistake because he cursed and threw me away from him and into the sea. The current dragged me out to the depths away from my twin. I was out to sea for a long time before I was pushed back towards land and washed up amid seaweed and shells on a different shore. Here I was picked up by gentle hands, and examined, and kept as a mysterious treasure.The sea and time have separated me from my twin forever. I am now a part of a collection that will always be incomplete for I am one of a pair.

JEFFREY
ITEM BC UCSB 1: metal key, inscribed, Florida beach
When Romana buried the shiny object she found in her mother’s purse, she and the swallowing sand triggered a series of events with profound consequences for five lives. Her parents could not gain entrance back into the timeshare they had purchased, and her mother admitted during the thunderstorm that drenched them on its steps that she never wanted two weeks in Florida every year anyway, and maybe she did not want the fifty weeks in New Jersey either.

ITEM BC UCSB 2: tooth, possibly fossilized, England
When Augustine combed the beach at Utica he discovered on that receding shore the tooth of a mammoth, which he mistook for a giant’s molar. He committed to parchment a reverie about his find, a story of vast humans and time out of memory, but the tooth he hurled back into the sea. Currents moved the thing from Africa to India, then around the jutting coasts of Europe. Because a saint had once grasped the tooth, the object cannot erode. It has over time diminished, however, and when discovered along the Thames held no narrative of woolly beasts or primordial giants or a holy man walking the beach and dreaming theology.

ITEM BC UCSB 3: a very small oliphant, pierced for use as a pendant, Nova Scotia
Isotopic analysis suggests manufacture near Roncesvalles. Tusk of a pygmy elephant, possibly bred for tiny oliphant production. Intended to be decorative. Sword slash on side suggests use during battle -- puzzling, because horn emits sound roughly similar to buzz of a kazoo. Martial deployment may have been accidental: perhaps user believed would resonate more loudly, with catastrophic consequences. Discovery of object in Canada may suggest early settlement of North America by Carolingian adventurers.

Posted by Jeffrey Cohen at 6:34 PM