My most exhilarating moment of BABEL14 was the "scale" plenary, pictured here: 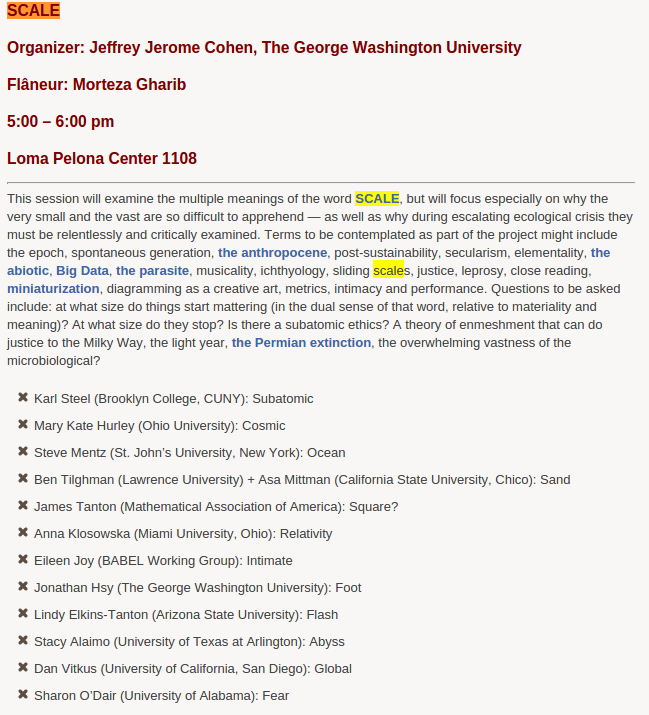 We had 4 minutes each, banging through one paper after another. We kept to time, with more or, in my case, less dignity. I know myself to be a roughly 135/words a minute speaker. And I knew I had about 4 minutes and 15 seconds of stuff. Still, I started my paper on "subatomic" with too much excitement or too much of a sense of citizenship. Maybe I felt guilty about the extra 15 seconds. Zooming through the opening bit (with a pipsqueaked "I've read Karen Barad!"), I realized my error, applied the brakes, and slowed down gradually to ponderous solemnity as I approached my time's end.

This may have sounded deliberate. It wasn't.

Thanks to Jeffrey for inviting me to be a part of this, and thanks to the other presenters: it was a real pleasure to watch you work, and to join you in this vast working thing.

My paper follows. Remember: it's exhortatory.


It's not uncommon to think if we could just to get to the ground of things, we'd have the truth. I've read Karen Barad, and I can tell you that's not quite right. The more precise you get, the less certain. On the subatomic scale, and not only on that scale, we find not foundation, but indeterminacy, as yet unresolved into either wave or particle, where particular ways of engagement yield particular realities. Down there, and perhaps not only down there, epistemology and ontology collapse or feed into each other.

There's another, even less rigorous way to think of "subatomic," not one concerned with size but rather with distance and perspective. Things seem smaller when we're far away or when we're too big to notice them without effort. Up close, things seem bigger. Middle English scholars will know where I'm going with this: Chaucer's Troilus, killed before the walls of Troy, ends by looking down on "this litel spot of erthe," laughing at everyone who weeps for his death, because his spirit, now speeding through the eighth celestial sphere, knows this mutable world to be nothing but "blynde lust, the which that may nat laste."

Troilus, freed from earthly love and earthly affection, thinks he finally got it right. To him, the world has become tiny, and therefore insignificant. Actually: he's right, but not entirely. Compared to the smooth motion of the celestial spheres, compared even to the place, wherever that is, where Troilus will spend eternity, our earth is insignificant. From up there, it really is "nys but a faire" that "passeth soone as floures faire." It really is, from up there. And down here it's something quite different, which Troilus would know too if only he came back.

I'm more sympathetic to Tolstoy's Prince Andrei, who has a similar vision as he nearly slips into death while lying on the field of Austerlitz. He looks up and considers his hero, Napoleon, a "small insignificant man" compared to the "lofty, infinite sky." And yet he wants his life back, "which seemed so beautiful to him, because he now understood it so differently." Andrei also gets perspective, but not like Troilus. He's gotten not perspective but perspectives. He knows both sky and the world down here are true, both correct, both irreducibly important. And so on, we should say, at all scales, without limit.

The "subatomic" tempts us to it with the vain promise of foundation; or its smallness tempts us to mistake it for unimportant and ourselves, whatever we are, as the opposite. We scholars, but not only as scholars, let whatever concerns us occupy our whole attention. Our concern becomes our world. We let ourselves be captured by what others, sometimes our allies, assume to be just minutiae. They accuse us of losing track of the really important stuff, race, class, climate change, the god particle, language itself, evolutionary history, the whole nonhuman world and its weird times, and so on. Depending on whatever we're working on, they're absolutely right. And so are we, so long as we're not laughing at their little spot of earth. If you're feeling comfortable, too inclined to laugh, I suggest you change perspectives. 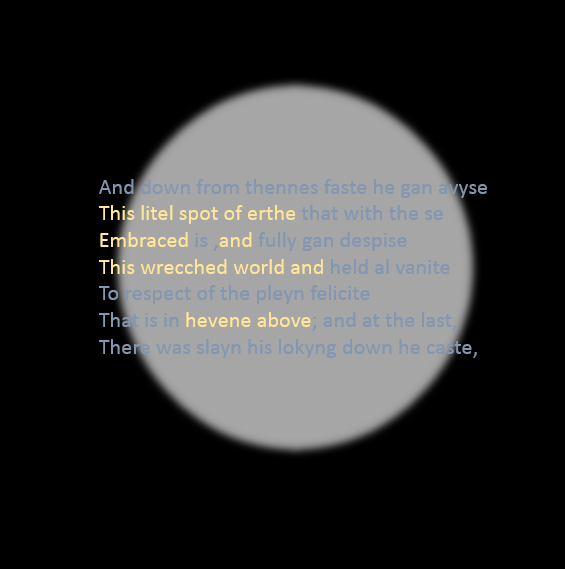 Posted by medievalkarl at 5:30 PM

Very nice. I wonder what you think of Julian's bit about the earth being a hazelnut in God's hand. Much the same as Chaucer? Or something different?

But I also do not think Troilus necessarily made a mistake -- he saw, from his perspective [admittedly, the supposed perspective of the heavenly, the detached, the "I'm up here and you're down there," etc.], how absurd our human strivings are, and he laughed. I like Troilus's laugh and it always reminds me of a scene from Kevin Smith's film "Dogma" when the angel played by Alan Rickman tells the "last scion" play by Linda Fiorentino, that God is lonely but has a sense of humor: "There's nothing funnier than the ridiculous faces you people make mid-coitus." This is not to say, as your paper urges, that we should not better consider each Other's "litel spot of erthe" -- that is ethical and humane, after all. But it also invites the tragic situation, when that "litel spot" cannot be let go of. So, yes, in agreement, that we should want both earth and sky, but also, on occasion, we may have to laugh at ourselves, and this world with all of its strivings, if only to keep going, while still HERE.