Changes Are Underway at postmedieval 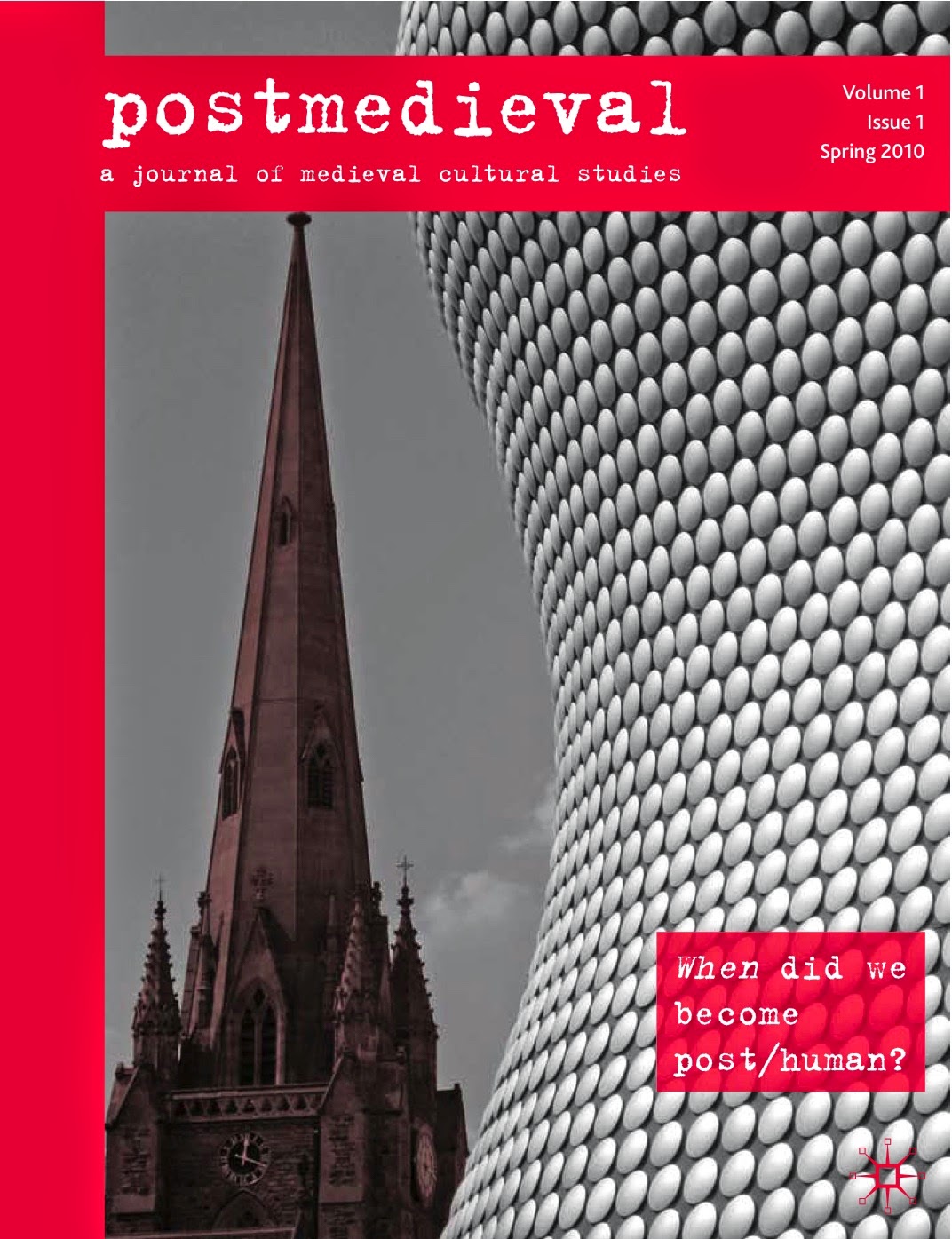 As mentioned in a previous post, changes are underway at postmedieval (now entering its sixth year of publication, and with exciting special issues forthcoming this year on Race, Medieval Poetry and Contemporary Poetics -- can you imagine translating Gertrude Stein's Tender Buttons backwards into Old English? Well, get ready . . . , -- Latin American Gothic, and New Critical/Liberal Arts), and beginning with Volume 7 (2016), as reported previously, Julie Orlemanski will be replacing Holly Crocker as Book Reviews and FORUM Editor, and Molly Lewis (PhD student in medieval and early modern studies at George Washington University) is our new Editorial Assistant. We issued a Call for a third editor to work alongside Myra and I, and we want to thank everyone who put in a bid for the position. It was while sorting through these very creative proposals that we were also serendipitously led to create yet another position, Editor for Digital Initiatives (EDI), about which we are very excited, especially as we very much want to continue creating new and vibrant models and platforms for knowledge creation and dissemination, hopefully helping to shape the future(s) of academic publishing in ways that are conducive toward a more rowdily democratic, open, and more globally networked medieval studies. We think this sort of editorial position is unique for an academic humanities journal to create and we're pretty excited about it.

In short, Lara Farina (West Virginia University), who has been both a contributor to postmedieval (Cognitive Alterities/Neuromedievalism issue) as well as one of its guest editors (The Intimate Senses issue), and a longtime BABEL co-conspirator (see, for example, her essay, "Sticking Together," in Burn After Reading), will be joining Myra and I as Co-Editor, about which we are pretty stoked since we have also long admired Lara's smart and stylishly creative scholarship on erotic/embodied reading practices, queer sexuality, and medieval sensation (especially touch). Also joining us will be Daniel Powell (Marie Skłowdowska-Curie Fellow in the Digital Scholarly Editions Initial Training Network, King's College London and a fourth-year doctoral candidate in the Department of English at the University of Victoria) will be joining us as Editor for Digital Initiatives. Daniel will work closely with Julie on further developing our FORUM, our semi-annual open-access web platform for public, open, and (hopefully) spirited conversations and debate relative to the content published in postmedieval and to pressing issues and questions circulating in medieval and early modern studies, and the humanities, more broadly. But this is just one piece of the EDI position. More specifically, with Daniel's guidance, we've described the EDI's job this way --

The EDI is meant to challenge received orthodoxies of scholarly knowledge production and scholarly communications. In this we are inspired by ongoing developments in the digital humanities, new media publications, Open Access, the maker movement, and information visualisation. The EDI will have three primary areas of responsibility and initiative building:
Daniel will bring to this position his own research interests (which center on two disparate, but complementary periods, the early modern age of print, roughly 1476 – 1660, and the contemporary Information Age, roughly 1941-present, with a special focus on how cultural expression – stage, print, film, new media – is materially enacted using a variety of media, and how such media is preserved, accessed, and used within the academy), as well an an already impressive background within the Digital Humanities (you can see more about Daniel HERE).

Please join Myra and I in welcoming Lara, Daniel, Julie and Molly into the postmedieval fold, and in the meantime, get ready for this -- 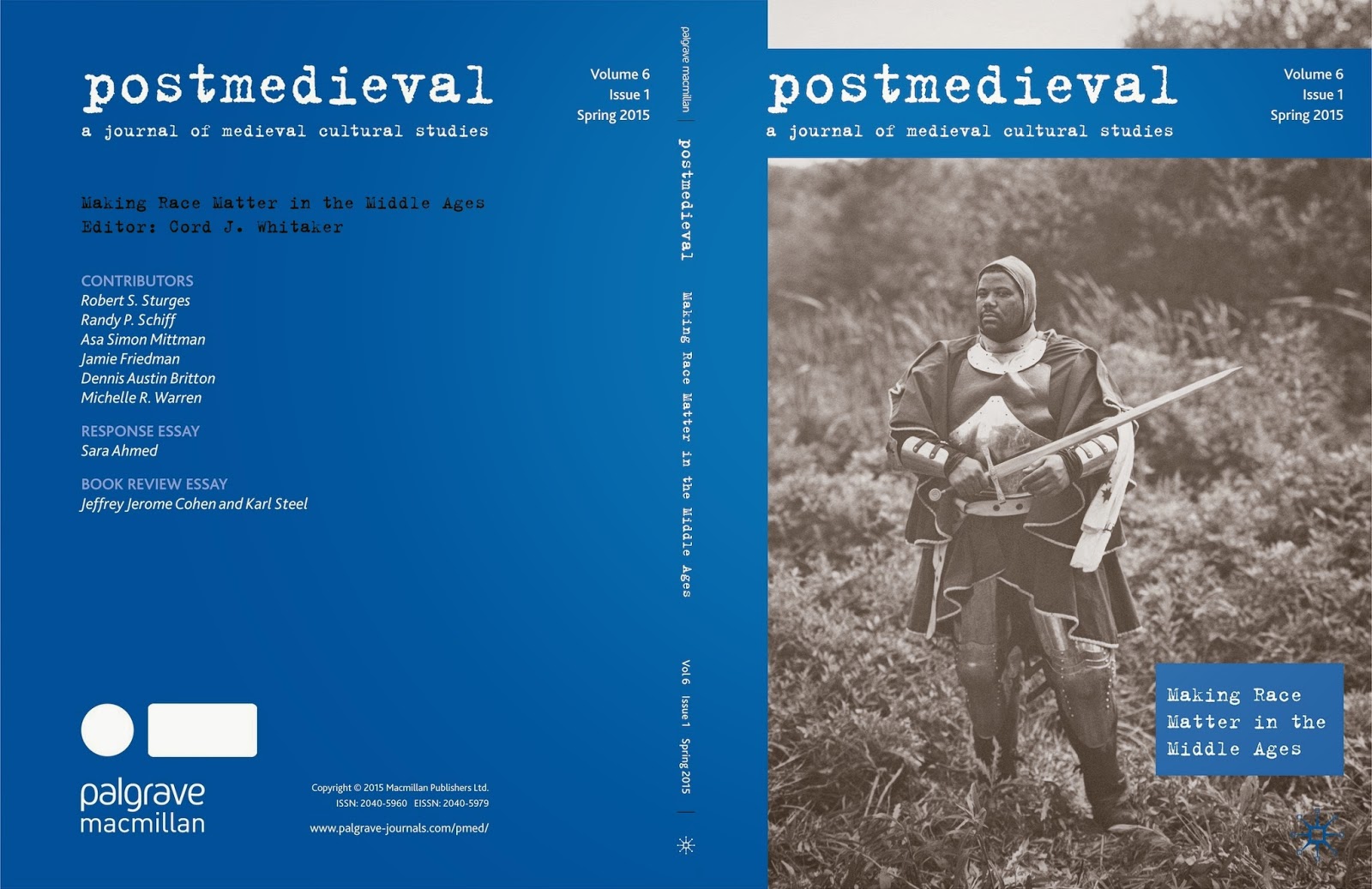 Cord Whitaker's issue of "Making Race Matter in the Middle Ages" will go LIVE next week, on April 14th!