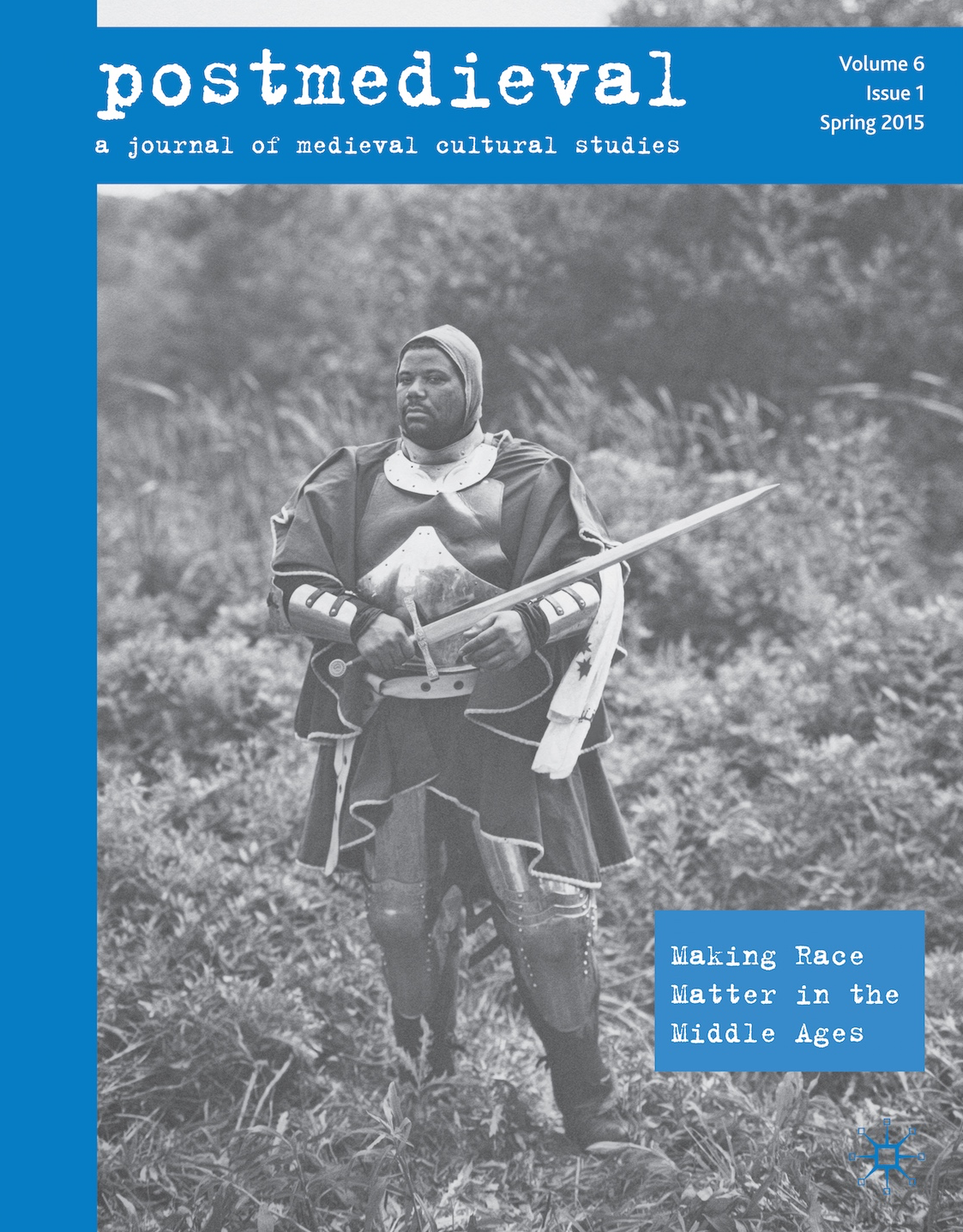 
... the study of the European Middle Ages has denied blacks the right to a shared medieval past that would, in turn, authorize them to share the present that emerges from it. In other words, denying blacks medieval coevalness allows Euro-centric cultures to relegate modern blacks to a strictly modern status in which their history appears to be without the authorizing length and depth available to whites. The denial of medieval coevalness encourages students to ask, ‘Where were the black people in the Middle Ages?’ in a tone that suggests they are not entirely certain whether black people existed at all.

~Cord J. Whitaker, "Race-ing the dragon: the Middle Ages, race and trippin’ into the future"

-- edited by Cord Whitaker, and featuring essays by Sara Ahmed, Dennis Austin Britton, Jeffrey Jerome Cohen + Karl Steel, Jamie Friedman, Asa Simon Mittman, Randy Schiff, Robert Sturges, and Michelle Warren. Some very important work has been done on race in medieval studies, especially in the 14 years since the 2001 special issue of the Journal of Medieval and Early Modern Studies titled "Race and Ethnicity in the Middle Ages," edited by Thomas Hahn, and yet, as Cord asks us in his Introduction to this issue, the question for us now is not whether or not the Middle Ages have been "raced" in our studies, bit more pointedly,

These questions are important if we want "to approach race in the Middle Ages not as possible but as certain," which means, in Cord's view, "to resist the temporal hierarchy that posits the medieval as ineffably other, and to resist the related racial hierarchy that posits some groups of people -- marked out by religion, culture, phenotype, geography -- as primitive, behind the times, ‘medieval,’ while others living concurrently are considered modern." Ultimately, the issue as a whole "destabilizes modernity’s claims to its distinction and independence from the Middle Ages; it destabilizes whiteness’s claim to normativity," and it "forces open ‘the margin of hope against every power play that demands order,’ especially racial hierarchy, especially modernity." In addition to Cord's Introduction, "Race-ing the dragon: the Middle Ages, race and trippin’ into the future," the issue includes the following contents:

Are the ‘monstrous races’ races?

From the Knight’s Tale to The Two Noble Kinsmen: Rethinking race, class and whiteness in romance

‘The last syllable of modernity’: Chaucer in the Caribbean

CONGRATS to Cord and his contributors for such a brilliant issue, and for helping to ensure that our work on race in the Middle Ages never neglects something that Jeffrey and Karl point to, importantly, in the conclusion to their book review essay -- namely, that,

There is no innocent apprehension of the body, nor, thankfully, any way to reduce the body simply to life itself, though of course many have tried. No merely scientific understanding of race exists, nor an anterior time that will save us from its difficult histories. The obligation therefore endures to continue thinking with race, and to think continuously against race. To forget this fact is to remain without hope of change.