The Lewis Chessmen and "Margret the Adroit," their Maker (?!) 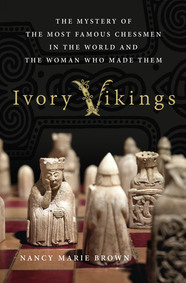 St Martin's Press asked me to bring this new book to your attention, and I am happy to do so, since the volume does appear to speak well on behalf of what makes studying the people and objects (as well as, by way of the sagas) the texts of the Middle Ages so rewarding. It's Nancy Marie Brown, Ivory Vikings: The Mystery of the Most Famous Chessmen in the World and the Woman Who Made Them -- and yes, OK, that title is quite attention grabbing: women as medieval sculptors and artisans? Not sure how that will be discernible in the art but I have not read the book yet so ... here is the blurb.


In the early 1800's, on a Hebridean beach in Scotland, the sea exposed an ancient treasure cache: 93 chessmen carved from walrus ivory. Norse netsuke, each face individual, each full of quirks, the Lewis Chessmen are probably the most famous chess pieces in the world. Harry played Wizard's Chess with them in Harry Potter and the Sorcerer's Stone. Housed at the British Museum, they are among its most visited and beloved objects.
Questions abounded: Who carved them? Where? Nancy Marie Brown's Ivory Vikings explores these mysteries by connecting medieval Icelandic sagas with modern archaeology, art history, forensics, and the history of board games. In the process, Ivory Vikings presents a vivid history of the 400 years when the Vikings ruled the North Atlantic, and the sea-road connected countries and islands we think of as far apart and culturally distinct: Norway and Scotland, Ireland and Iceland, and Greenland and North America. The story of the Lewis chessmen explains the economic lure behind the Viking voyages to the west in the 800s and 900s. And finally, it brings from the shadows an extraordinarily talented woman artist of the twelfth century: Margret the Adroit of Iceland.

You can read more here and buy the book in the usual places. Would be great, I think, for a course on contemporary re-imaginings of the Middle Ages.
Posted by Jeffrey Cohen at 7:45 AM