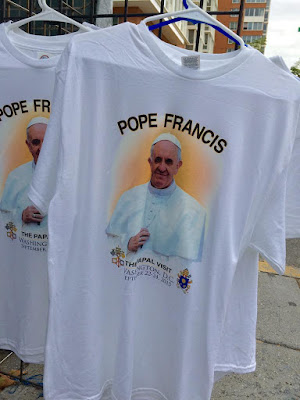 The Pope is coming to town! DC has been abuzz as it prepares for a visit by Pope Francis (the pontiff is arriving here tomorrow and staying for a few days before heading to Philly and NYC). Back in April 2008, JEFFREY blogged about the visit by the previous pontiff (Pope Benedict XVI, aka Bishop of Rome) making his way down Pennsylvania Avenue and bypassing the aptly-named Rome Hall (where the English Department is located). It would appear that Pope Francis has a very busy agenda and, alas, will not be making his way by Rome Hall this time around.

Among many other things, the Pope (as head of state of the Vatican) will be making a visit to the White House and will also make an unprecedented address to a joint session of the US Congress. There's much speculation about what he'll discuss, but -- as befits his medieval namesake Saint Francis of Assisi -- Pope Francis is expected to address issues of poverty and the environment. Indeed, the Pope's June 2015 encyclical letter entitled "Laudato Si'" draws its title from the refrain of the Canticle on Creation by St. Francis of Assisi (read more about this on the Medieval Histories blog); subtitled "on care for our common home," this encyclical has been interpreted as a call for policymakers to take action on climate change [you can read the original document in Italian, in English, and other languages on the Vatican website]. 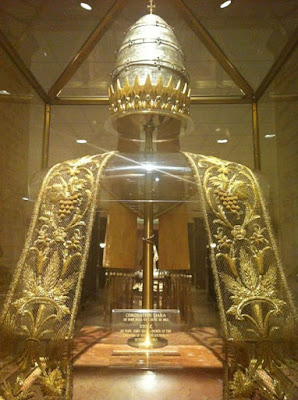 [The FABULOUS coronation tiara of Pope Paul VI, on permanent display at the Basilica of the National Shrine of the Immaculate Conception in Washington, DC. Photo taken August 2012.]

Even if the Pope isn't currently in town, there are a number of sites around DC where papal history and related aspects of medieval (specifically Franciscan) culture thrive. The Basilica of the National Shrine of the Immaculate Conception has some lovely papal artifacts on display. Pope Francis will visit the Basilica to canonize Spanish missionary (and Franciscan) Junípero Serra, founder of many missions in California; this canonization mass will be conducted in Spanish--this being not only the native tongue of Serra but also that of Argentina-born Francis (this also marks the first canonization mass of a Catholic saint to occur in the US). 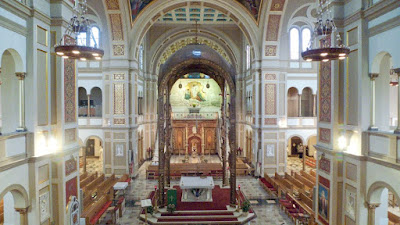 [A view of the gorgeous interior of the Franciscan Monastery of the Holy Land in America, Washington, DC. Photo taken August 2012 (click to enlarge).]

The Franciscan Monastery of the Holy Land in America is well worth a visit for its astounding replicas of religious sites in the Holy Land. This monastery is not surprisingly taking part in the visit of Pope Francis in a number of ways. The friars are hosting a watch party for the Pope's arrival, as well as an exhibit honoring Junípero Serra. 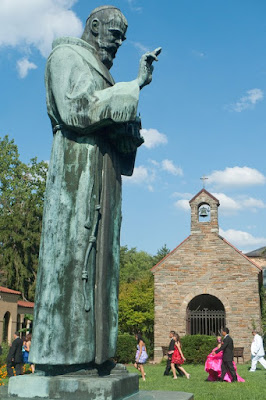 [Statue of Friar Godfrey (Rev. Godfrey Schilling), founder of the monastery, and a bypassing quinceañera procession. Inside the Garden of the Franciscan Monastery of the Holy Land in America, Washington, DC. Photo taken August 2012.]

Some more resources regarding the Pope's visit to DC: