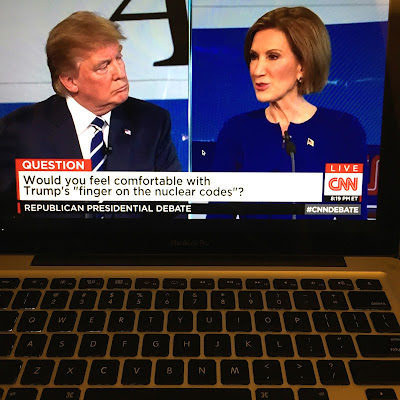 
I spent last night grading Chaucer translations and poetry assignments while the GOP debate played in the background. As someone who teaches in Washington, DC, I find it’s always interesting to “tune in” whenever election season rolls around—political debates invariably provide timely and topical ways to think about present-day issues of gender, performance, and the arts of rhetoric (all of which are key themes in many of my literature classes).

Donald Trump’s prominence in the field of GOP candidates has driven much of the mainstream media coverage of this election cycle, and last night The Donald didn’t disappoint.

A few weeks ago, Bruce Holsinger's brilliant #BeowulfTrump tweets (archived here by Shyama Rajendran) enacted a witty parody of The Donald’s rhetoric by imagining Trump in the role of the hero of an Anglo-Saxon epic. For more insights regarding masculine posturing and bombast, read this interview with Holsinger in The Washington Post (this meme has also taken the form of a stand-alone @BeowulfTrump twitter account). For an excellent analysis (from earlier this summer) of Trump’s performance habits that connects Trumpian rhetoric to Classical epics, check out Jeet Heer’s piece in New Republic.

There is a lot to say about how the inclusion of Carly Fiorina—i.e., the first appearance of a woman in a primetime GOP debate this cycle—transformed the discourse. The Washington Post (for instance) quickly declared Fiorina the “winner” of the debate (and Vox justifiably praised her “mic-drop response” to Trump’s misogyny), so on many accounts she more than held her own. What intrigues me most this morning, though, is Fiorina’s response when all the candidates were invited to close the debate by offering their vision of America. Fiorina waxed poetic in a weirdly ekphrastic (and all-female) personification allegory (I cite the partial transcript here):

I think what this nation can be an must be can be symbolized by Lady Liberty and Lady Justice. Lady Liberty stands tall and strong. She is clear eyed and resolute. She doesn't shield her eyes from the realities of the world, but she faces outward into the world nevertheless as we always must, and she holds her torch high. Because she knows she is a beacon of hope in a very troubled world. And Lady Justice. Lady Justice holds a sword by her side because she is a fighter, a warrior for the values and the principles that have made this nation great. She holds a scale in her other hand, and with that scale she says all of us are equal in the eyes of God.

I'm sure ITM readers will discern many other uncanny affinities between contemporary political discourse and medieval rhetorical traditions. I'll be curious to find out what other gems this election cycle will offer.
Posted by Jonathan Hsy at 10:09 AM