Medievalists and the Global Refugee Crisis

[UPDATED September 8 with more links! Scroll to the end of this post.]


This entry falls somewhere between a compilation of links/resources and a proper essay. In this blog posting, I wanted to reflect a bit on the global refugee crisis that's currently in the news and consider how (or if) medievalists might respond to what's happening in Europe and elsewhere. 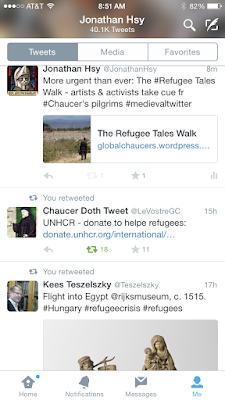 [Images from my twitter feed yesterday (September 6), including premodern iconography of the biblical Flight into Egypt.]

The image above is a screenshot from my mobile device yesterday morning—and it happens to provide a sample of different ways medievalists (premodern academics) are engaging with media coverage of the plight of refugees in Europe and other places around the globe:


Popular media (especially social media) has deployed the adjective “medieval” to varied ends: sometimes the term targets refugees themselves, but other times refers to the perceived mentalities of governments (European as well as Middle Eastern) in response to this crisis [I won't link to particular examples here, but a quick search for "medieval" and "refugee crisis" certainly brings up examples].

In mainstream news media, people of varied religious backgrounds are discussing the ethics of refugee welcome, including


Historical context: In an earlier conversation on twitter (after the mass murders in the Emanuel African Methodist Episcopal Church in Charleston, SC, and subsequent news coverage of an online racist screed attributed to the shooter), Karl Steel stated that we as medievalists must be prepared to disrupt racists’ idea of "Europe." As indicated in the article about nativism and xenophobia linked above, the refugee situation has laid bare political anxieties over a "Muslim takeover" of Europe, and related fantasies of a white, Christian nation can become the implicit or overt basis for excluding refugees from over land or sea—and not only in Europe but also across the so-called “Global North” of industrialized countries (e.g., Australia, Canada, New Zealand, United States). 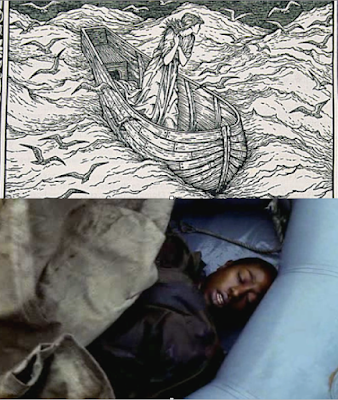 [Top half of image: The opening to The Man of Law's Tale (illus. Edward Burne-Jones) in The Kelmscott Chaucer (William Morris, 1896) depicts Constance set adrift on a rudderless ship.
Bottom half of image: In the opening scene of the 2003 BBC adaptation of The Man of Law's Tale (written by Olivia Hetreed, directed by Julian Jarrold), Constance is a Nigerian refugee.]

In addition to addressing a broader historical view of "Europe" and its meanings over time, how might medievalists think more carefully about analogies made between the lives of medieval people and refugees today?
I'll end this post by referring, in a roundabout way, to my own discussion of medieval Constance narratives (Chaucer's rendition as well as analogues by Boccaccio, Gower, and Trivet) in my book Trading Tongues (2013). The focus of my analysis on that book was on perpetual disorientation of the protagonist and she moves across space and language. Earlier this year, Pamela Troyer reviewed my book in the Rocky Mountain Review, and I was intrigued by her account of how she brought my chapter into her classroom. I quote these paragraphs here not because of what Troyer says about my book itself but what rather for her attentive reflections on the varied perspectives and life experiences of students from recent immigrant backgrounds:

After reading Trading Tongues, I experimented with Hsy's ideas in a required course I teach that includes readings from Canterbury Tales. The class had students majoring in literary studies, secondary or elementary education, and creative writing. Three of them were bilingual and most of them from area public schools, which are now multilingual communities; the Denver Public Schools posts its "top languages spoken" as Spanish, Vietnamese, Arabic, Somali, Amharic, Nepali, and Russian. Since we only spend six weeks on Chaucer's works, I have never assigned the Man of Law's Tale, but after reading Hsy's treatment of the Custance story [...] I wondered if the students might identify with her traumatic experience of geographical and linguistic displacement. [...]

I fully expected the class to be perplexed and stymied by the strange elements of the story and by Custance's impossible travel trajectory—the story is so medieval!—but a surprising number of the students related to her vulnerability and powerlessness. They saw her as a recognizable victim of racial violence, religious persecution, and sexual harassment, bartered by "pimps" or "slave traders." A student whose parents immigrated from Guatemala wrote with unexpected clarity that Custance "is just like many women in the world today, a social outcast with no access to justice except the fantasy of God's grace." My students found Custance's peripatetic suffering plausible and accessible. What they found "medieval" and unrealistic was the conclusion of the story: Custance survives her travails (the French root of travel) without having been raped or beaten and without losing her healthy child to kidnappers or death. Unrealistically she is reunited with her people in material comfort in her homeland. One first-generation American summarized it as "typical immigrant wishful thinking." (Troyer 98)

Troyer's discussion tantalizingly ends there, and there's much more about this classroom experience that could be explored. How does an affective response to a seemingly alien medieval world change how one thinks about (im)migraiton, desire, hope, nostalgia, life trajectories? I'll just end this posting by asking few questions. What are the ethical investments of medievalists in this current humanitarian crisis (or any crisis, for that matter)? How (or should) we address urgent present-day concerns in our scholarship, in our classrooms, online, or in the streets?

Very nice, Jonathan -- thanks for all the links! I've also been thinking about Caroline Bergvall's brilliant book *Drift*, which is about the 21c refugee crisis by way of "The Seafarer." Maybe at some point I'll sneak in a quick update or extension of what I wrote about it in 2014: http://stevementz.com/caroline-bergvalls-drift/

Thanks so much for that reference, SM: I'm a big fan of Caroline Bergvall's "Meddle English" (teaching it this term!) but hadn't yet come across "Drift." I will look forward to reading it, and thanks for these links. I've added your blog post to the list above, and if you do end up extending/expanding what you wrote about it let me know.

Perhaps you might also wish to note the comments here: Barbarian Hordes and Pitiful People
http://www.medievalhistories.com/barbarian-hordes-and-pitiful-people/
As it happens, it was much worse then...