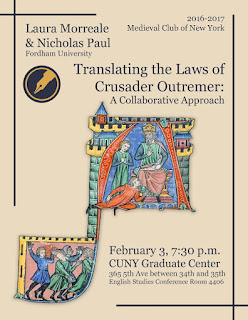 Briefly noted - last night, the Medieval Club of New York was fortunate enough to witness, and participate in, a presentation by Fordham University's Laura Morreale and Nicholas Paul, on their translation project of the French Laws of Crusader Outremer. Here's a link to the project. As they observed, the late twelfth to late thirteenth-century Crusader kingdoms produced a vast body of original French writing, mostly charters, unsurprisingly, but also a large quantity of law texts. These laws, as Nicholas Paul noted in particular, were a kind of laboratory for chivalric practice and belief: many are oriented towards ritual, towards proper speech formulas, and so on.

Morreale and Paul are leading an online translation effort using FromThePage, a custom-built tool for creating collaborative digital editions of texts. Paul and Morreale and their shifting group of collaborators meet twice weekly, online, for an hour's work in translating, working from OCR'd versions of 19th-century editions of the laws, themselves checked regularly against manuscripts and modern editions. It's fun! We know, because our presenters pulled up a text, and we, as an audience, along with two experts brought in via Google Chat, put our Old French to work and got down to translating.

Here's a sample of what we worked on: 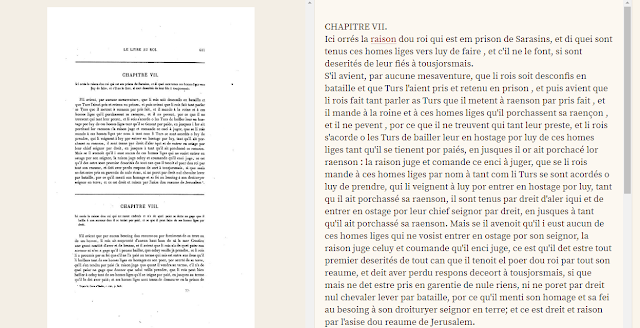 Frankly, the rubric gave us the most trouble: 'Ici orrés la raison': we settled on 'words' for 'raison,' but not without some [expert!] struggle. The other question: when the king's been 'retenu en prison,' has he been taken prisoner or put in prison? Surely we're talking about captivity in general rather than a particular space? And so on.

The bulk of what we produced - and, again, this is a working translation - is here:

If it happens through some mishap that the king be defeated at battle and that the Turcs take him and hold him as prisoner, and then it happens that the king has such parley with the Turcs that put to ransom at a set price and he asks the queen and his [homes liege|liege men] that they pay the ransom and they cannot because they cannot find anyone to lend them so much, and the king agrees with the Turcs to grant them as hostage for him as many of his liege men and they will consider themselves paid.


For a list of texts, what's been done, and what's left to do, see here.
Posted by medievalkarl at 2:37 PM