Stone has been awarded the René Wellek prize 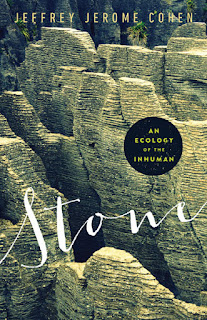 Hello everyone, just wanted to share on a platform other than Facebook some good news I received last week. My book Stone: An Ecology of the Inhuman has been awarded the René Wellek prize for best book in comparative literature. The announcement was wholly unexpected (I had no idea my book had been nominated) and I am honored beyond words. The prize is to be awarded at the ACLA Annual Meeting in Utrecht this summer but because of travel plans I made quite a while ago I will actually be flying home from a stay in the UK on the day I might have been going to the Netherlands.

The Wellek Prize is shared this year between between Stone and Viet Thanh Nguyen's superb book about war and memory, Nothing Ever Dies: Vietnam and the Memory of War. I like the small confluence in these two choices to ponder openly what and when comparative literature means. The latest (and must-read) issue of PMLA has a special cluster on "Literature in the World" edited by Simon Gikandi, and his introduction "Another Way in the World" offers a powerful meditation on the founding of comparative literature by exiles to the US who wanted to find a way to frame and preserve a "western tradition" -- a thing, really, that escapes the moment it is articulated. Gikandi speaks of Auerbach and Wellek sympathetically, while also making clear what limited their vision of what "tradition" designates. In my own work I have tried to find -- among other things -- the recalcitrant and not to be assimilated Jewish stories within what is often passed off as a monolithically Christian middle ages, and to explore how these narratives resonate with the more-than-human world, which likewise continues to frame and impress the tales that are told in and about the medieval. Well, I wrote Stone not knowing if it would ever find an audience and it is kind of nice to find it being read -- and being placed in the company of books like Nguyen's, so much its better.

The GW English Department has a short post on my book and the prize. Thanks to the University of Minnesota Press, which encouraged the book's unconventional framing, and to all ITM readers, without whom this book would never have been written: almost every page contains portions that were first experiments on this blog.
Posted by Jeffrey Cohen at 11:07 AM

Congratulations to you!! Nice to see that your hard work with hours of dedicated research has been recognized. You more then deserve the award in my humble opinion. Thanks for the information that you share and have a great day.