Chancing Faith in the Middle Lane

or My Medievalism on the Freeway

Since he released his award-winning mixtape Coloring Book in May of 2016, I have been listening to a lot of Chance the Rapper. Chano, as he is also known, includes in his music more explicit references to his Christian faith than any mainstream hip-hop artist has since at least 2004 when Chance’s mentor Kanye West released “Jesus Walks.” The instrumental gospel riffs and frequent inclusions of gospel choir vocals have been more than enough to keep this hip-hop fan and gospel singer listening.

A few nights ago, I was driving and decided to listen to an iTunes playlist titled Guest List: Chance the Rapper. It is a collection of songs from other artists on which Chance is a featured guest. My best intellectual and emotional work gets done while driving. This night, something completely unexpected happened: I was forced to reflect on my medievalism. Thanks to Chance, my medievalism’s roles in my emotional and intellectual life were suddenly laid out before me like the glimmering asphalt of the freeway.

My reverie began when I listened to James Blake’s “Life Round Here,” featuring Chance. James Blake Litherland is a London-based popular musician whose work is influenced by the electronic music known as dubstep, an outgrowth of reggae. Since the release of his first album in 2011, he has released two more albums and gained such worldwide popularity that he has collaborated with superstars the likes of Beyoncé. His music is notable for its haunting quality. His voice, in a falsetto that is at once airy and manages to ground its lyrics with weight—the conflict at times seems otherworldly—floats above the accompanying electronic music and heavy bass. His is eminently drivable music. It inspires contemplation, which explains why I was already grooving when one of the chorus’s lyrics transported me to an earlier time in life.

When Blake, whose London accent is discernible in his singing voice, sang “Everything feels like touchdown on a rainy day,” I was suddenly back on the USAir flight that first carried me to London in 1999. I looked out over the rolling green hills as we approached Gatwick. Farmland, then the orderly homes of the suburbs. A gray sky that made the green hills that much greener. The tarmac was wet. It was the first time I had ever crossed the Atlantic, and I would spend six weeks attending the Cambridge English Literature Summer School and  exploring London. I felt a mix of emotions: excitement about my adventure, and also disappointment that my adventure had already begun. That part of it—my first transatlantic flight at the tender age of 19—had already become history. I was joyous and sad. It was like touchdown on a rainy day.

Thanks to Blake’s soaring voice over heavy bass—a good metaphor for the paradox of an enormously heavy mass of steel hurtling through the sky as if it were as light as the air that carries it, i.e., jet flight—I was already primed for reminiscence when Chance’s voice broke in on the second verse:

Why every time Iland in London, Land of Lincoln all on my mind?
I plan to plane it back after playin’ a packed show in due time
I’m ‘round about I bought a round of English ale for my pals

But, like Chance, home—“the Land of Lincoln”—was always on my mind. It’s not that I was homesick. I wasn’t. Instead, I was amazed at how very at home I felt in London. Coming from Philly, one of the oldest major cities in the United States, a town where three-hundred year-old brick buildings are regularly nestled between steel and glass towers, London’s own mix of the medieval, early modern, and modern felt just like home. Indeed, in London I felt the same things that make Philly home, but even more intensely. To this day, every time I land in London, the Land of Franklin is all on my mind.

Chance, with James Blake, reminds me what it is to touchdown on a rainy day, to make new friends, to imagine my future by playing in the past, and to leave home in order to feel more at home.

When the song ended, I thought my reverie had come to an end. Then the playlist continued.

I heard Kanye West’s “Ultralight Beam,” featuring Chance, in a way I had not heard it before, and my thoughts shifted from how I became a medievalist to why.

With lyrics including “This is a God dream,” “So why you send oppression not blessings?,” and “Don’t have much strength to fight so I look to the light,” “Ultralight Beam” reminds me of my upbringing in the African Methodist Episcopal Church. While those lyrics are delivered by West and the gospel superstar Kelly Price, Chance delivers the most Africanist of all the lines when he raps, “Foot on the Devil’s neck ‘til it drifted Pangaea / I’m moving all my family from Chatham to Zambia.” Referring to St. Michael standing on Satan’s neck, Chance explains in a now deleted tweet that he meant that he stands on the devil’s neck with such force that it causes continental drift. 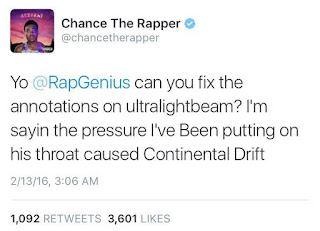 The lyric references Marcus Garvey’s back-to-Africa movement while overlaying it with the theory that North America, Europe, and Africa were once one contiguous land mass. The lyric implies that African Americans should consider returning to Africa. At the same time, it refers to a time when the lands and peoples of the world were united. The lyric therefore suggests that African Americans have never really left Africa.

An intellectual and spiritual focus on the united African diaspora characterized my upbringing in a church, founded in eighteenth-century Philadelphia, that celebrates its historical roles in the process of black empowerment in both the US North and South—before emancipation, during Reconstruction, through Jim Crow, and in the Civil Rights movement. At the same time, a church ensconced in American race politics has also grown to become a connectional organization of millions of adherents around the globe, including on the African continent.

The AME Church’s liturgy was even more important than Philly’s mix of the old and the new in making me a medievalist. I studied elocution in church, though not so much in school. The church’s eighteenth-century liturgy made up much of my material. I used to ponder why God judged “the quick and the dead” rather than the living and the dead. I found myself fascinated by the fact that Jesus “sitteth” at the right hand of God the father. The ‘archaic’ English that persists in the AME liturgy has been forgotten by the United Methodist Church, from which the AME church split over racial prejudice in 1787. It captivated me: the church preserved older forms of language in order to show African Americans’ mastery of and claim to the history of Methodism. It also demonstrated and claimed a history of American identity and the English language on the whole for African Americans. The language of the founders was, and is, sacred.

Affirming the connection between my African Methodist faith and my interest in the English past was the fact that the only person I knew well with a British accent was a member of the church—Mrs. Betty Martin Combs, a dear friend of my family who had married an American serviceman and immigrated to the US from her native Liverpool decades before. When I told her I wanted to go to England, she put me in touch with her brother, Tom, a London-based social worker and former football star. He and his tight-knit group of friends introduced me to black London and have become my ‘London family.’

At home in London and with friends who are like family there, I was not satisfied with studying the eighteenth century. I was, after all, surrounded by that period’s legacy at home in Philly. Now in my new, surprising, and therefore more exciting home, I wanted to know where it came from that we use –eth at the end of a verb in the third person singular. I wanted to dig deeper into the fact that learning about medieval Catholicism was already giving me a deeper understanding of and appreciation for AME doctrine, despite the latter’s direct descent from contemporary Methodism. Most of all, mastering and delighting in a past that is all too often considered homogeneously white—the Middle Ages—struck me as thoroughly within the historic and radical spirit of African Methodism.

This radical spirit came to mind again when I heard Chance compare himself to Harriet Tubman. Not one for modesty, he calls himself “Tubman of the underground,” and invites others to “come and follow the trail.” In another tweet, Chance refers to this as his favorite lyric of the song. Commentators on genius.com point out that Chance has rapped elsewhere about his efforts to create pathways for underground hip-hop artists to go mainstream without signing exploitative deals with big record labels. Perhaps Chance can back up his immodest claim. He is, after all, taking on an entrenched business model that has been exploiting black artists since well before hip-hop became a mainstream form. Perhaps he really is leading other artists to freedom. At very least, I can attest that his radical embrace of his Christian faith in his now mainstream music produces a feeling of freedom in me. When I’m listening to his rhymes while flowing down the freeway, I do feel free. Free the same way I feel when I’m reading medieval literature.

While I wouldn’t go so far as to follow Chance in calling myself a “Tubman,” I will say that medieval literature is a trail worth following. And if I happen to lead a few more scholars of color, whether professional or amateur, to the intellectual and spiritual freedom I find in studying medieval literature, I will consider myself having done good and faithful service.

Finally, good and faithful service is exactly what I aim to offer as the newest blogger on In the Middle. I am grateful to have been asked and excited to join the team. Here’s to the intellectual and spiritual freedom this blog has been inspiring for years—and to many more years of the same!