One of my (many!) procrastination habits is poking around in manuscripts online to see what might turn up. Recently, I’ve found the following–
To start you off lightly, here’s a multicolored embroidered repair to a hole in a Historia Scholastica manuscript, in a section about the various woods used to manufacture Jesus’s Cross:

And then this – the Occitan Abreviamen [or Abreujamen] de las Estorias, Egerton MS 1500, c. 1321-1324, an illustrated universal history, specifically, a diagrammic chronicle, remarkable, to me at any rate, for its representations of differences in skin color. Here’s one image:

and here’s another, 52v, from the same manuscript:


There is work on the manuscript by Catherine Leglu and especially by Federico Botana, but to my exceedingly limited knowledge, nothing on its skin tones. We could use further comparison. Botana’s superb codicology puts Egerton 1500 alongside Venice’s Biblioteca Nazionale Marciana, MS Zanetti Latino 399, but unfortunately, as the latter manuscript isn’t online, I don’t know how it shows its sultans, nor its Sibilla or Isabella. Nor do I know enough about diagrammic chronicles even to know whether it’s more or less unusual to decorate genealogies with faces: for example, click through for a Biblical genealogy from the Aargauer Kantonsbibliothek, MsWettF 9 239v, mostly a list of names, but also featuring a delightfully nonplussed bird, grumpy at being dragooned into the Flood story. Cambridge, Trinity Library O.1.78 provides only the names of the English kings; see also this mixture of the two in the Biblical genealogies in Dijon Bibliothèque municipale Ms 634, a manuscript of Peter of Poitiers’ Compendium.

As further evidence that I poked around a bit, I can also cite these from the British Library: Royal MS 14 B VI (genealogy of the Kings of England, faces and for most kings, full bodies); Royal MS 14 B V (similar but with the full complement of silly medieval marginalia – snails, animal doctors, deer-hunting rabbits, &c); Add MS 48976 (the Rous Roll, so delicately drawn, whose genealogy diagrams are just names, sometimes becrowned); Cotton MS Domitian A VIII (English kings, just names); Cotton MS Nero D I (Matthew Paris’s notes, just names); Harley MS 7353 (Edward IV and biblical typography plus an actual genealogical tree with potentate portraits as leaves, and, well, just click through). The Abington Chronicle [Cambridge Trinity R.17.7] sadly isn’t online yet.

If anyone’s fishing around for an essay topic, then, you might want this in the mix as well:
No other king in the manuscript is so colored; and if you’d like to try to guess by reading about Penda in a proximate English history, be my guest.
Finally!
Marvel at this notation of hunting horns, represented as floating in air, as sound, in Hardouin de Fontaines-Guérin’s Livre du Tresor de Vanerie. There are just the three manuscripts, one of which, I believe, is a postmedieval copy, and the other unillustrated. But one, BnF 855 is so, so wonderful:
Notation like this graces so many of its illustrations. Of course your humble procrastinator is not the first to notice these: as of the 1990s, the modern expert is Eva Marie Heater; Julien Brunelliere has written on it more recently; and Henri Kling cracked the code in 1911. 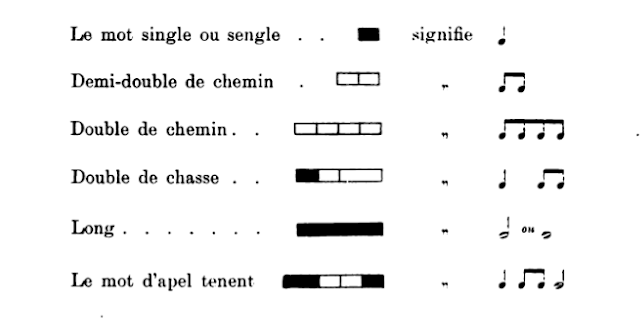 Finally, it was edited twice in the nineteenth century, its illustrations reproduced both times, and once in a style that, at least for those of us who read independent comics in the 1990s, recalls nothing other than Dame Darcy’s legendary Meat Cake:
Please compare, and with that, I am done, and back to much more mundane medieval matters:

Posted by medievalkarl at 2:37 PM

Of course, it wasn't until after I posted this that I found the MEDIEVAL SCROLLS AT HARVARD website. Quite nice.

I really appreciate you taking the time to bring these very fascinating illuminations to our attention! I would equally appreciate a more general inclusion, every now and then, of Art History (and Art Historians) in this blog.