Held in his lap Deliciously: Medieval Hermits, Distracted by Cats

Obviously, if you like what we do, join our community. And please, if you haven't done so yet, read this guest post by Shamma Boyarin, which will give you a good sense of what we've been up to recently. This post here is comparatively, and perhaps even absolutely, frivolous. 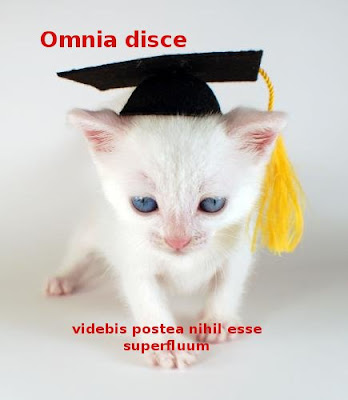 Apparently it’s International Cat Day, and, for several days, unwitting I have been researching medieval cats and the envious hermits who love them. What good fortune!

You probably know that the Ancrene Wisse (early 13th century) allows anchoresses one cat: “Ye, mine leove sustren, bute yef neod ow drive ant ower meistre hit reade, ne schulen habbe na beast bute cat ane” [VIII 76-77; My dear sisters, unless need drives you and your director advises it, you must not have any animal except a single cat, 201, trans. slightly modified]. Fewer of you might know how the passage continues: anticipating the damage that cows [“kues”] might cause, it warns the anchoress of the trouble that comes when her neighbors have anything to complain of [“Ladlich thing is hit, wat Crist, hwen me maketh i tune man of ancre ahte” (It is a hateful thing, Christ knows, when men can make in town anything of about an anchor; 201, trans. slightly modified)]. And especially if any anchoresses must have animals, it advises “loki thet…hire thoht ne beo na-wiht th'ron i-festnet” (see that…their thought is in no way fastened on it).

Have a cat, but beware of being too attached to it. To put this another way, even then, cats were liable to draw our love. For these reason, the eleventh-century Liber confortatorius by Goscelin of Saint-Bertin, written in England to Eve, a woman recluse, insists that “No cat, no chicken, no little animal, no irrational creature, should live with you: fleeting time should not be wasted” (Book III, Otter trans., 80). For this reason, in the fifteenth century we encounter the unfortunate Margaret, a nun tormented in purgatory, who “had a lytel hound and a lytel catte folwynge hyr, al of fyr brennynge” [61; had a little dog and a little cat following her, both of them aflame], and who would not relieved from them until the “drosse of syn” (78) is fully burned away.

In the twelfth century, in his manual for rulers, Gerald of Wales includes a feline temptor of this sort in an aside about Gregory the Great. It’s written that a certain hermit had heard of the sanctity of Pope Gregory and went to see him in Rome, where he witnessed a grand procession of cardinals, clerics, and especially Gregory himself, bedecked with his imperial regalia. He returned to his place [locum suum], and wondered at night whether this glory suited humility, and then, as he slept, he heard a voice reciting this verse [hunc versum modulantem audivit]: 'Pluris habes catum quam praesul pontificatum’ [You esteem the cat more highly than the pope does the papacy]. For, as Gerald explains, this good man had a cat, which he was accustomed to play with [ludendo] after he finished his work and prayers. (Thanks Trevor Russell Smith for help here).

The earliest surviving version of this story may be in Gerald; Robert Bartlett, who alerted me to it, does not list anything earlier (Why Can the Dead Do Such Great Things?, 199), nor have I been able to find anything earlier on my own. Despite what some claim, the cat story is not in John the Deacon’s early life (PL 75:103-6, pdf), nor in this early life from Whitby. But it does appear in Vincent of Beauvais’ Speculum historiale, sadly denuded of Gerald’s catum/pontificatum pun: "Angelus Domini ad quendam eremitam, qui unum cattum pro relevando taedio secum habebat, de eodem Gregorio testeretur dicens: Majorem delectationem habes in hoc catto, quam Gregorius in omni imperio Romano" (XX.19, p. 867; an angel of the lord came to a certain hermit, who had a cat to relieve the tedium of living alone, and said to him about Gregory, you have more delight in this cat that Gregory does in all the power of Rome).

And from there, it strolls into the Golden Legend of Jacobus da Varagine (more commonly, Voragine), whose more than 1000 surviving Latin manuscripts attest to a universal readership in medieval Latin Christendom. I can cite, for example, the translations by Jean de Vignay, themselves quite popular: “tu aimes miex cele chate que tu aplanies tous les jours que il ne fait les richesces (BnF fr. 241, 76v; you love this cat that you caress every day better than he loves his riches). Judging from the examples in Godefroy’s Old French dictionary, which have to do mainly with horses, the verb for caressing, aplaner, may have been used particularly for animals, and therefore might be translated as “pet”; it certainly, and charmingly, was related, then and now to flattening, leveling, or smoothing out (the modern French aplanir).

Jean de Vignay wasn’t the only French translator; Jean Belet, for example, writes “En ces tans fu uns hermitains hons de grant vertu qui avoit laissie toutes choses por dieu et n'avoit nule chose fors que une chatte, laquelle il aplaignoit souvent et aussi com sa copaigne en ses genouz la norissoit” [Bnf fr. 20330 47v; In those times there was a hermit of great virtue has had left all things for god and had no possession except for a cat, which he caressed often, and like his companion, he fed her [while she sat] on his knees; thanks Jeanette Patterson for paleographical assistance!]. We also find the story in a thirteenth-century French verse translation of Life of Gregory, where the smugly pious hermit is more proud (“orguillous e fier”) than Gregory, because of his delight in his cat:

Tu ton chat eimes e nourris,
Bailles e beises e polis
(You love [presuming that eimes is from aimer] and feed your cat / and play with him and kiss him and “polish” him).

And of course we find it in English too, and once on a window in Canterbury Cathedral. While Gregory is missing from the saints collected in John Mirk’s Festial, and while the South English Legendary (in both EETS editions) focuses, narcissistically, on Gregory’s famously inspired evangelization of Britain (“not Angels, but Anglicans!”), it does appear in the 1430s in the Gilte Legende (taken mostly from Jean de Vignay): “How durst thou make comparison betwene the richesse of Gregori and thi pouertee, sethe thou louest more thi catte that thou handelest and strokest eueri day thanne he dothe all the richesse that he hathe, for he dispisethe hem and yeuith hem frely to eueri man” (Vol. 1, 203). And from thence, but also via Jean de Vignay, we have Caxton’s translation, which may be the most delightful of all: "And in that time there was a hermit, an holy man, which had left and forsaken all the goods of the world for God's sake, and had retained nothing but a cat, with which he played oft, and held in his lap deliciously" (Vol III, 66-67).

And that would be that for the cat, were it not for one more story of this sort, still more brief, in a Life of Saint Basil. Again, this story does not appear in the early life, attributed to Amphilochius (PL 73); nor have I yet found it anywhere earlier than the Golden Legend: it’s not in Aelfric, for example. Again, a seemingly proud prelate; again, a smugly humble hermit and his cat; and then one more detail, its tail: “Tu amplius delicaris in palpando caudam gatte tue que delectetur Basilius in apparatu suo valent” [Einsiedeln Stiftsbibliothek Codex 629(258), 41v; You delight in stroking your cat’s tail more than Basil does in his vestments: dating to 1288, this is the second-oldest copy of the Golden Legend, made during Jacobus’s lifetime, and delightful to me, because of what strikes me as an Italianate gatte for catte, hinting at a casual, vernacular affection for this animal].

Another hermyte seigh another tyme Seint Basile go well besain [“be seen,” that is, “on display”] in abyte of a bisshop and despised hym in his thought, seyeng: ‘Lo what delyte he hathe to go in suche bobaunce.’ And a vois ansuered hym and saide: ‘Thou delitest the more in strokyng of thi catte thanne Basile in al hys araye (Vol 1, 117) (Caxton here).

The thirteenth-century Franciscan Chronicler Salimbene di Adam would not have approved. In Coulton’s translation:

I have seen in mine own Order certain Lectors of excellent learning and great sanctity who had yet some foul blemish, which caused others to judge lightly of them. For they love to play with a cat or a whelp or with some small fowl, but not as the Blessed Francis was wont to play with a pheasant and a cicada, rejoicing the while in the Lord (90)

As much as I like pheasants and cicadas, I’m charmed by how cats insist on getting into our business, on demanding our attention, on substituting for God, on puffing us up with pride for them, how they draw ascetics astray from their celestial thoughts down to this warm and fuzzy and tailed earth. Delicious.

Thomas, Richard, “Perceptions Versus Reality: Changing Attitudes towards Pets in Medieval and Post-Medieval England.” In Just Skin and Bones? New Perspectives on Human-Animal Relations in the Historical Past, edited by Aleksander Pluskowski, 95-104. Oxford: Archaeopress, 2005.

And another short blog post on medieval cats, from 2013, here.
Posted by medievalkarl at 3:43 PM