This morning my expense report was rejected for not having checked a button that does not exist. This afternoon the resubmitted version was rejected for not having the documentation and notes that were in fact attached. The report was initially composed with great urgency, since the university sent several emails in ALL CAPS announcing that some of my expenses were more than thirty days old and would therefore be ESCALATED TO MY MANAGER if I did not submit them. I have no idea who that manager would be since my department chair has nothing to do with these things -- but I am also not keen to be escalated all the same. I have again submitted the report with a screen shot of the relevant page in Concur (why give a software program a name that is an ominous imperative?) and documentation that I consulted the Help Desk and was told that if such an unchecked button did exist it would be an error to check the thing for the type of expense I was recording. I pointed out that the missing documentation is the documentation that was always attached.

In other words this is a normal day of me working on the GW MEMSI budget. I fully expect the report to come back again tomorrow because I did not provide a business purpose for the iced tea imbibed at a planning lunch (you think I am kidding but the business purpose of iced teas and salads are topics I have discussed with those who have rejected my reports in the past). Anyway, then this came up as a Facebook memory: 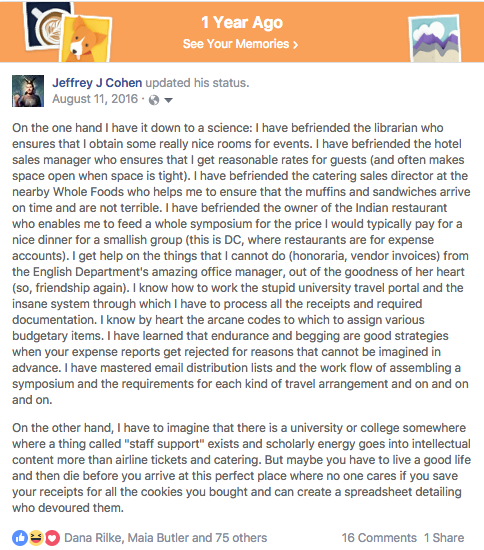 So it seems that some issues are perennial. But maybe not infinite. Here is what I wrote as I shared this memory on that other social media platform:

Every year at this time such thoughts recur -- and these institutional impediments are among the reasons GW MEMSI as a university-funded entity (but not as a community) is coming to an end this spring. But that's not the only reason. Ten years amounts to a very good run for the Institute. Its innovative work is in large part done (meaning, I don't want merely to replicate what we've long been doing, the default mode of an institution when it focuses upon its own existence rather than creation of new structures and possibilities). It is perhaps time to make space for other communalizing entities, here at GW or elsewhere, whatever they might be.

And, in all honesty, I need a change: I cannot keep doing what I have been doing for the next ten years. I don't know what the future holds, but I acknowledge that I am restless, and I am not sure what will come next.

It's been quite a summer, one that included two trips to the emergency room, once in DC and once in London. Both were the result of having been bitten by a Lyme disease bearing tick, possibly while hiking in search of the three Green Chapels in Staffordshire (who says that the life of the mind won't kill you?). The good news is that the onset of symptoms was so swift that I was on the prescribed regimen of antibodies almost immediately, so I caught the infection just about as early as possible -- and that makes my prognosis for a full recovery excellent. Yet the infection took its toll, and it's only this week that early morning runs feel invigorating rather than a danse macabre in action. I have been coming to my office every day, partly because I am dropping my daughter off nearby for Camp Shakespeare and partly because I am trying desperately to catch up on email, dissertation chapter comments, syllabus writing, GW MEMSI planning for 2017-18 ... and expense reports. The routine has given me time to think about routines, and futures, and what I want to do with my life next. I don't really have an answer, but I acknowledge that I need a change.

Once I am no longer directing MEMSI (our ten year celebration is in March: join us!) I do not know what will come next. But not more of the same. 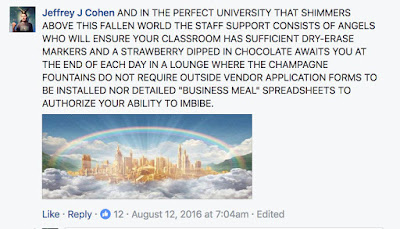 Posted by Jeffrey Cohen at 3:02 PM