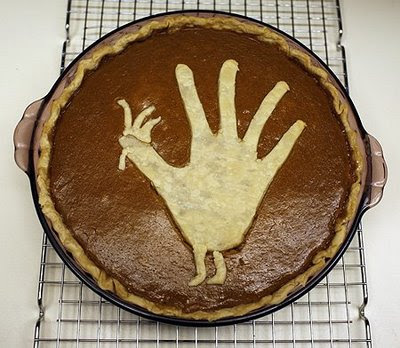 Clumsy post title, I know: French doesn't have a good translation for Thanksgiving. We at ITM are grateful for you, our readers and commentators. Merci, et merci encore.

But why all this frenchiness, tu demandes? Partly because my son's homework is to name each item at notre repas in French. Did you know that la compote d'airelles = cranberry sauce? Or that une tarte à la citrouille is pumpkin pie (something I won't eat, because it violates the ancient alimentary law against mixing vegetables with desserts)? You may even know that le dindon or la dinde is turkey, but what I want to know is: what about Tofurky?

Alex's French teacher also emailed us this short piece from the NYT, about a French connection for the holiday. Really, though, Davis provides a meditation on origins, cultural mixing, and willed forgetting that should be familiar to any medievalist:

Long before the Pilgrims sailed in 1620, another group of dissident Christians sought a haven in which to worship freely. These French Calvinists, or Huguenots, hoped to escape the sectarian fighting between Catholics and Protestants that had bloodied France since 1560.

Landing in balmy Florida in June of 1564, at what a French explorer had earlier named the River of May (now the St. Johns River near Jacksonville), the French émigrés promptly held a service of “thanksgiving.” Carrying the seeds of a new colony, they also brought cannons to fortify the small, wooden enclosure they named Fort Caroline, in honor of their king, Charles IX.

In short order, these French pilgrims built houses, a mill and bakery, and apparently even managed to press some grapes into a few casks of wine. At first, relationships with the local Timucuans were friendly, and some of the French settlers took native wives and soon acquired the habit of smoking a certain local “herb.” Food, wine, women — and tobacco by the sea, no less. A veritable Gallic paradise.

Except, that is, to the Spanish, who had other visions for the New World. In 1565, King Philip II of Spain issued orders to “hang and burn the Lutherans” (then a Spanish catchall term for Protestants) and dispatched Adm. Pedro Menéndez to wipe out these French heretics who had taken up residence on land claimed by the Spanish — and who also had an annoying habit of attacking Spanish treasure ships as they sailed by.

Leading this holy war with a crusader’s fervor, Menéndez established St. Augustine and ordered what local boosters claim is the first parish Mass celebrated in the future United States. Then he engineered a murderous assault on Fort Caroline, in which most of the French settlers were massacred. Menéndez had many of the survivors strung up under a sign that read, “I do this not as to Frenchmen but as to heretics.” A few weeks later, he ordered the execution of more than 300 French shipwreck survivors at a site just south of St. Augustine, now marked by an inconspicuous national monument called Fort Matanzas, from the Spanish word for “slaughters.”

With this, America’s first pilgrims disappeared from the pages of history. Casualties of Europe’s murderous religious wars, they fell victim to Anglophile historians who erased their existence as readily as they demoted the Spanish settlement of St. Augustine to second-class status behind the later English colonies in Jamestown and Plymouth.

But the truth cannot be so easily buried. Although overlooked, a brutal first chapter had been written in the most untidy history of a “Christian nation.” And the sectarian violence and hatred that ended with the deaths of a few hundred Huguenots in 1565 would be replayed often in early America, the supposed haven for religious dissent, which in fact tolerated next to none.

Starting with those massacred French pilgrims, the saga of the nation’s birth and growth is often a bloodstained one, filled with religious animosities. In Boston, for instance, the Puritan fathers banned Catholic priests and executed several Quakers between 1659 and 1661. Cotton Mather, the famed Puritan cleric, led the war cries against New England’s Abenaki “savages” who had learned their prayers from the French Jesuits. The colony of Georgia was established in 1732 as a buffer between the Protestant English colonies and the Spanish missions of Florida; its original charter banned Catholics. The bitter rivalry between Catholic France and Protestant England carried on for most of a century, giving rise to anti-Catholic laws, while a mistrust of Canada’s French Catholics helped fire many patriots’ passion for independence. As late as 1844, Philadelphia’s anti-Catholic “Bible Riots” took the lives of more than a dozen people.

The list goes on. Our history is littered with bleak tableaus that show what happens when righteous certitude is mixed with fearful ignorance. Which is why this Thanksgiving, as we express gratitude for America’s bounty and promise, we would do well to reflect on all our histories, including a forgotten French one that began on Florida’s shores so many years ago.

Merci à Mme Howard for sending this sobering reminder of forgotten histories to her students. And happy thanksgiving!
Posted by Jeffrey Cohen at 9:54 AM

Ok, that's just strange... my sixth-grade French teacher was also named Mme. Howard. But this was in Toronto. Weird!