Mongrel Solidarities: The Year My Parents Went on Vacation 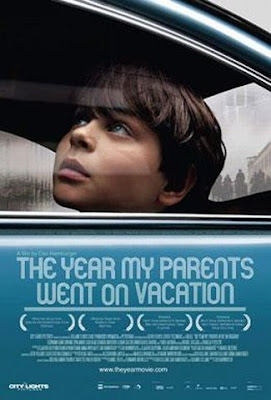 This morning Eileen and I were making email film recommendations to each other, and I thought I'd share my note to her because the movie has so much to say to some of the thinking about community we do at ITM.

Last night Wendy, Alex and I watched the amazing Brazilian film O Ano em Que Meus Pais Saíram de Férias / The Year My Parents Went on Vacation. The moral of the story is that although the world we live in can be perilous, even inimical, affinity groups burgeon in unexpected places. These groups are mongrel, mutable, and transitory ... but they are also sustaining, especially for those who feel themselves in exile from some dominating culture. And who among us (the film asks) is not in exile?

The film also spoke eloquently to me in thinking about Uncle Paul, since (among other things) the narrative tracks shifting ethnic identities, especially Jewish ones. The bare plot revolves a young boy named Mauro being dropped at the door of his grandfather's apartment (his parents are fleeing political persecution, though they tell Mauro only that they are going on vacation). After sitting by the appointed door for hours, Mauro learns that the man he awaits died earlier that day. Unable to contact the vanished parents, uncertain how to proceed with this unwanted visitor, a neighbor named Shlomo takes the boy in, then consults his rabbi on what next to do. The rabbi declares that the Moses story is being reenacted, with Shlomo as the Pharaoh's daughter: he must care for the child. Shlomo protests that Mauro is a goy (his mother is not Jewish, and when the kid pees into a houseplant Shlomo sees he is not circumcised). Yet the rabbi is unyielding: the identity of the boy matters not at all; the command to care for the lost trumps all else. Shlomo starts calling Mauro Moshele ("little Moses") and with the help of not only the local Jewish community but nearly all of the racially mixed São Paulo neighborhood of Bom Retiro gives him a sense of belonging and of being loved.

Horrible things happen in this film. Violence limns its edges. People disappear. Mauro's mother does eventually return, however, and the boy she transports away from this haven is different from the one she left behind a year previously: full of the knowledge of how lethal the world can be, but full also of its ability to nurture, protect and change those who inhabit it, even in the face of what is darkest.
Posted by Jeffrey Cohen at 4:04 PM