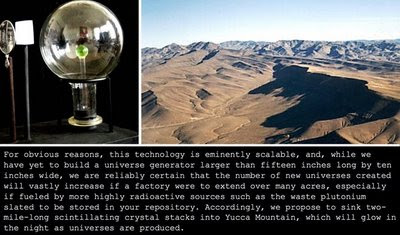 by J J Cohen
This is even bigger than the Long Now Foundation's announcement of an iconified list of US land art.

Forget the architectures of ominous warning upon which I've been brooding, perpetual markers of a poisoned Yucca Mountain landscape. How about something more positive -- say a universe generator -- instead? An excerpt from an interview with the artist:

The nuclear waste buried beneath Yucca Mountain will be there for millennia, untouchable and lethal. Conceptual artist Jonathon Keats would put that time and radioactivity to use by turning the dump into a generator of new universes.

His plan is based on the laws of quantum physics, which state that each atomic particle exists in multiple states at once until observation fixes it in time and space. Keats, who recently built a temple of science to explore the implications of science-based religion, takes this literally.

In "Universes Unlimited," an exhibition opening today at the Modernism gallery in San Francisco, Keats unveils a do-it-yourself universe creation kit, on sale for just $20 and made from components bought on eBay — and, as he explains in a half-tongue-in-cheek letter to the Department of Energy, it could easily be scaled up to the dimensions of Yucca Mountain, dotting its 230 square miles with crystal towers glowing in a redemptive fount of creation.

After all, if the pebbles of depleted uranium-enriched glass in his DIY kit produce an estimated 200 universes a minute, the mind boggles at what 77,000 tons of highly radioactive waste could generate

[The rest at Wired, via the always brilliant Bioephemera -- which Wednesday featured one of my favorite pieces of DC accidental art]

Posted by Jeffrey Cohen at 5:50 AM