Of Haptic Pasts and Lampshade Fezes 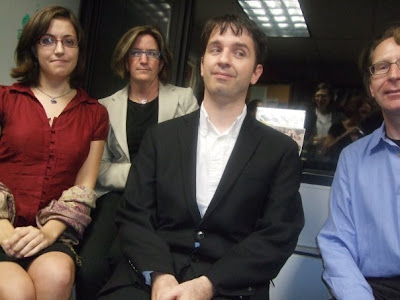 Given that the single objective of the recent Touching the Past symposium at GW was to convince Carolyn Dinshaw that a small, burgundy colored lampshade was in fact a fez, and then to photograph said medievalist with said "fez" atop her head, I can without hesitation declare that Touching the Past was a resounding success.

Some highlights:
Although perhaps it goes without saying, still I must say: the symposium would not have been possible without my wonderful GW colleagues Holly Dugan, Jonathan Hsy, Marcy Norton, Jehangir Malegam. Lowell Duckert undertook much of the labor that made the event possible, and Mike Smith and Beth Lattin pitched in at key moments to save the day.
Posted by Jeffrey Cohen at 2:52 PM

If you squint at the picture, above, taken by Karl, you can see the ghostly presence of two ITM commentators and favorite people, who were in attendance at the conference.

It should be said, rather, that the picture was taken by the apple on your desk, or maybe by the camera itself. After all, I just balanced the camera on the apple, set the timer, sat down, and carefully composed my features into what Eileen calls "fairy-like bemusement" (by which she means frozen in some uncanny rictus:

Then I just waited for the camera and the apple to take the picture.

This waiting for the object to record US is of course in honor of Julian Yates' resocentric (to coin an appropriate thingly word) work. If only a sheep had been holding the apple!

==
If anyone from the outside feels like talking about my question about the bats in Diane Ackerman's Moon by Whalelight and bad touch, be my guest! I'm worn out, and looking forward to the arrival of Eileen's S. Spenser paper tomorrow, and to the arrival, as well, of A Canterbury Tale, which has been vaulted to the top of my netflix queue, and which awaits its addition to my memory collection of Powell's landlubbing trio: I Know Where I'm Going and The Edge of the World).

And there she is again, mocking like a mocking mocker mocks. Wonder where she learned that?

By the way, Jeffrey--congratulations! Everything was beautiful.

And, (PS), just to share line or two of Heaney that I like, since I've been so down on him lately, from "Squarings" in Seeing Things:

Sink every impulse like a bolt Secure
The bastion of sensation. Do not waver
into language. Do not waver in it.