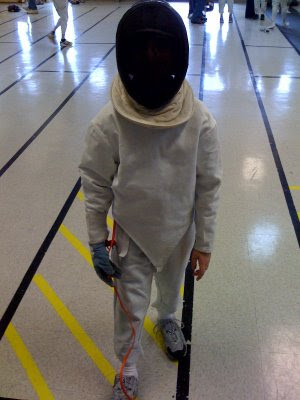 [illustration: what I see every Saturday afternoon for three hours. Peer inside the mask to discern the mystery boy]
by J J Cohen

Given the profession of his dad, perhaps you will find no surprise in the fact that my son Alexander's sport is fencing. Prodding at an opponent with an epée? What could be more medieval?

Fencing was not Alex's first sport. We tried soccer, swimming, baseball ... you name it. If they gave Olympic medals for reading interminable series of fantasy novels, Alex would get the gold, but in the ordinary games of mere mortals he is, well, rather mediocre (and that makes him far more athletic than his dad, already). Yet fencing is not perfect just for its workouts (strenuous) or its violence (patent). The type of kid fencing attracts is also one of its selling points: quirky children, often with an offbeat sense of humor, dedicated, smart, a good sense of fun. Alex, in other words, has finally found a peer group as odd as he is.

As did I, in the parents who observe the workouts and matches. Among these parents I've had the chance to chat with casually is a man whose son Eric is passionate about fencing. Eric's a great kid; he and Alex have hit off. And Eric's dad is also a great guy. His name? Also Eric. Eric Holder.

Swinging with a broad sword or battle axe?

This is fantastic. Where does Alex take fencing at? Is it offered at school, or is there an independent martial arts-like place that offers the lessons?

An epée is skinny, Swain, but not so thin as a foil.

Anon: he takes it here via this guy.