"the past, present and future of England itself" 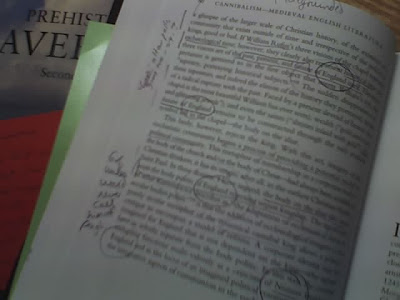 My post on Cannibalism in High Medieval English Literature concerns Blurton's chapter treating "Cannibal Kings." Like Karl, I've provided you with a view of my marginalia, and you'll quickly see my own obsession: the relations among nation, kingship, ethnic identification (especially when more than one identification is simultaneously available for an author or a given historical person), and the transnational vectors of twelfth-century England. I'm wondering, really, if it is fair to call the work of Geoffrey of Monmouth, Gerald of Wales, and Walter Map English rather than British. And I'm wondering if it matters that the two regents the chapter treats, William Rufus and Henry II, were kings of England but were not English kings.

I've always thought that "William Rufus" should be translated as "Billy the Red." William Rufus makes it seem like he possessed two fairly unremarkable names ("William Rufus, you come over here this minute!") rather than a resonantly non-English name plus an epithet. Just like a pirate. Or a Viking. Or a Norman. You can see where I'm going with this. Billy the Red estranges the name enough to make it clear that it wasn't necessarily easy to accommodate him into the roll call of "English" monarchs. And think of how much more difficult it was to assimilate his father, Guillelmus Nothus (William the Bastard, whom we now politely call William the Conqueror).

So, picking up on what Dan Remein wrote about cannibalism and assimilation in the comments to Eileen's post, I'm wondering if some of the cannibal anxieties that surround William Rufus, even as a doppelgänger for Henry II, don't have to do with the nation per se but with the regent himself, especially as a body in which "Englishness" is something of a problem. In a time of layered, hybrid, and even multiple ethnic/national/racial identities for the aristocracy, is it really all that easy to substitute the body of the king for the corpus and community of the realm? Henry II is a good illustration: his Norman granddad married Matilda, the daughter of Malcolm III of Scotland (but thereby also a descendant of Edmund Ironside and other greats of the "Anglo-Saxon" royal family). Henry II's father was the detested (by the English) Earl of Anjou, Geoffrey. This complicated descent makes Henry II many things, but "English" isn't all that easily one of them. Neither, really, is "Norman," making it not so easy to align him with William Rufus except in the way that both were potential intrusions of the strange. But then again, by the time Hnery II plopped his royal derriere on the throne England had long been ruled by men who were not fully English: not even the Confessor had been that.

So, here is my question. Much of the material Blurton examines is written by authors of compound heritage: Walter Map and Gerald of Wales and possibly Geoffrey of Monmouth had some Welsh blood; Marie de France, while of unknown origin, lived in England but composed in French (a language she interwove with English, Breton, and Welsh materials). So, if England had a "body politic," who then is this England? The non-international, quietly assimilated members of the aristocracy and upper class (call them the lower elites)? Or is "England" an imaginary corporate body that doesn't in fact have specific members -- that, in a way, exists nowhere except as a disembodied idea, and as an anthropophagous one at that?
Posted by Jeffrey Cohen at 1:26 PM

Jeffrey--I'm wondering if your question about England--

"if England had a 'body politic,' who then is this England? The non-international, quietly assimilated members of the aristocracy and upper class (call them the lower elites)? Or is 'England' an imaginary corporate body that doesn't in fact have specific members -- that, in a way, exists nowhere except as a disembodied idea, and as an anthropophagous one at that?"

--might not hinge on the very term, "anthrophagous," that you invoke here, and which, in this instance, anyway, is also "cannibalism"? If, by "cannibalism," we mean "humans consuming humans," then, yes, "England" has only ever been a "body" whose "members" are made up of a variety of "self-eaters"--i.e., assimilation has always been the rule, not the creation and preservation and maintenance of "pure blood" tribes and/or regions & states. I just always fall back, when it comes to this question, on John Moreland's essay, "Ethnicity, Power, and the English" [in William O. Frazer and Andrew Tyrell, eds., "Social Identity in Early Medieval Britain" (London: Leicester University Press, 2000), 23-51], or really, to any work in post-processural archaeology [Catherine Hills or Richard North or Susan Reynolds or Richard Jenkins or Sian Jones, etc.], in order to explain how "ethnicity" or "race" or "Englishness" or "Anglo-Saxon-ness" is always some kind of socio-political construct that covers over more "mixed" or "compound" heritages. Also useful in this respect is the work on late antiquity studies that calls into question conventional "Migration Era" narratives, like "On Barbarian Identity: Critical Approaches to Ethnicity in the Early Middle Ages," ed. Andrew Gillett [Brepols, 2002] and Walter Goffart's "Barbarian Tides" [Univ. of Pennsylvania, 2006]. So, that's my long-winded and citation-heavy way of saying that I would answer Jeffrey's question with, "yes, 'England' is an imaginary corporate body--one, moreover, that has always had need to 'consume' others through conquest, conversion, and also assimilation with so-called 'invaders,' such as the Danes."

Something that might be interesting to look at, in early England, would be the ways in which ideas of "tribe" and "natio" and "Angle-land/England" begin in creative and pragmatic political alliances but then tend toward positing, retroactively, a supplementary idea of "pure" origins, which then undergird actual material violence against persons and/or groups perceived as "other" to those "origins." Pragmatic politics depends on assimilation and appropriation of disparate groups who then construct fantasies of ethnic, racial, tribal, what-have-you "foundations" that can be invoked for the purposes of exclusion, expropriation of property and rights, etc. It would appear that the "histories" of William Rufus's dreamed cannibalism that Blurton analyzes in her book are connected, on a very deep level, to a desire on the part of the 12th-century chroniclers to have need of "inside" and "outside" cultural markers, whereby a William Rufus is a kind of contaminant in the national "system" that also acts as a "warning signal" for Henry II. Does this make sense?

Eileen, your comment makes a lot of sense to me, and I'm a great admirer of the work you cite. I'd also add Peter S. Wells, The Barbarians Speak since it too undermines the imagined separations among peoples and gets at the dynamics of intermixture that inevitably follow cultural contact. I also like how the book insists that contact isn't something that happens when one army meets another or a colony is implanted in a thin contact zone; evidence of cultural admixture is inevitably found far behind the line of the frontier from a very early date.

One thing I was trying to emphasize in my post -- and Moreland, for example, is good at bringing this out -- is how a national or group or tribe or other corporate identity is often carried only by elites. It's more difficult to say what kinds of belongings those lower down the social scale imagined for themselves, outside of their households or families. Thus Bede's Angli may well have been a minority caste. Things get more complicated post-Conquest, when the highest members of the aristocracy carry truly international identities; I would imagine that Englishness belongs to a rung on the social ladder lower than this, to the class below them of wealthy individuals who do not have transmarinal holdings, etc.

JJC--thanks for that clarification, regarding, as you write,

"how a national or group or tribe or other corporate identity is often carried only by elites. It's more difficult to say what kinds of belongings those lower down the social scale imagined for themselves, outside of their households or families."

I completely agree and I actually bring this up a lot when I teach medieval romance literature and the subject of love & marriage in the Middle Ages. We know better now [than C.S. Lewis did] that so-called courtly literature did not so much reflect the reality of actual medieval courts as it presented fantasized and idealized versions of that world which was always, in the literature anyway, aristocratic. I often tell my students that the kind of relationship we envision as "romantic" and what, following Raymond Carver, "we talk about when we talk about love," would not have been recognizable to medieval persons situated in elite social groups where the choice of one's husband or wife was not always "free." [Interestingly, I read a book review a couple of years ago--can't remember author or title--of a book that argues that the kind of love we imagine as "romantic love," and also our ideas of marriage, are all post-Milton and also traceable to Milton . . . hmmmmmmmm.]

My students always want to know, of course: but what about the lower classes? Did anyone even care what *they* were doing, who they were choosing to marry, etc.? Of course, the answer is complicated since, at least from about the 12th century onward, the Church *did* concern itself, in intrusive ways, with marriage at *all* levels. But what ultimately interests me [and here is where I see the "point of contact" between the Middle Ages and our own time] is how much the medieval romantic literature [much like our own "romantic comedy" or just straight "tragi-romance" movies, i.e. "When Harry Met Sally" or "The English Patient"] was recognized as pure fantasy by medieval readers--elite and lower class alike--yet still influenced how love and marriage would have been philosophized, practiced, imagined-as-true, etc. In other words, what is the nature, more precisely, of the ways in which romantic-courtly literature, although fantastical, actually affects how people construct their relationships [and the extent to which we *believe*/have faith in those relationships]?

Perhaps we can also extrapolate from this back to our conversation about medieval England's "body politic"--yes, the "body politic" is often designed, ahead of time, along racial, ethnic, and other politically-charged lines, by the social elites, and may have even been recognized, initially, as fiction by those "writing" it; but over time, the "stories" harden into certain very material social realities that have ways of "trickling down" and affecting medieval persons at all levels. Nevertheless, you would have to be right, I think, to assume that those very far down the social ladder would have to have had ways of imagining different ways of "belonging" or "community." Probably the best book on *this* subject, which I'm sure I have now plugged at least ten or so times on this blog is the historian David Gary Shaw's Palgrave book, "Necessary Conjunctions: The Social Self in Medieval England," which specifically addresses your very question.