In his comment to the first post on Cannibals, JJC ask in reference to Anglo-Saxon monsters: “Do any offer crisp boundaries, unblurred lines?” Of course, the implied answer is no, none really stand as distinct, isolated Others, and this is the source of much of their appeal and power in the period. I want to expand this question outward to monstrous geography. In Blurton’s discussion of Mermedonia, we see the blurring of the boundary between the local and familiar (Britain) and the distant and apparently monstrous (Mermedonia). This is only one method, though, in which Blurton’s monstrous texts use geographic confusion to challenge the reader’s sense of fixed location. Blurton writes that the Wonders of the East has:

“an almost obsessive concern with measuring distance and mapping location. The distances to and from the reader’s stops on this strange journey through a fabulous eastern landscape are carefully measured out on two different scales, by direction (south of), or topography (near a river; on an island). The effect of these descriptive directions is to paint a mental map of the east, with location, distance, and landmarks all clearly located.” (48) 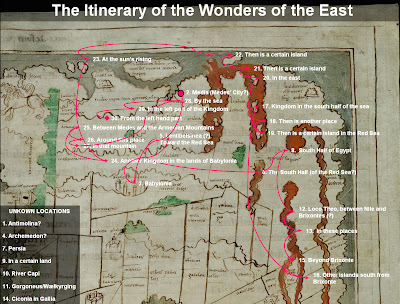 This notion is somewhat similar to that espoused by Lisa Verner in The Epistemology of the Monstrous in the Middle Ages (New York: Routledge, 2005), who refers to the Wonders as “geographically linear.” (65) Both of these texts are right to note the obsessive focus on geography in the Wonders, but if carefully observed, the directions are seen not to locate the monsters clearly but rather, to dislocate them, and to confuse and muddy our understanding of eastern geography, rather than to clarify it. If we were to actually follow the directions (those which can be followed—some are complete non sequiturs and others are so vague that they only confuse, such as those that being “[O]n summon lande,” or “In a certain land…”), we would have to travel, it seems west, east, south, west, east, north, west, south and finally north again. This image (click it for a larger and more legible version) shows my very loose and intentionally quixotic attempt to map the journey described by the Wonders on the Cotton Map, the earliest medieval mappaemundi, and that closest in date to the Wonders (and bound with an illustrated copy of the Marvels of the East, a bilingual work derived from the Wonders). This journey is by no means “linear,” nor does it really help us to get a good sense of location. Instead, these vaguely described and depicted beings seem to exist in a land where boundaries are fluid. The result is that here, unlike on the Psalter Map, the giant, anthropophagous monsters are not contained, not locked into tidy boxes in distant Africa and India, but rather, like the promised post-Apocalyptic hordes of Gog and Magog, they have been loosened upon the world.

Blurton is interested more in identity than diet, really, as am I. In her discussion of the Mermedonias, she raises an excellent question related to this topic: The description of the “sylfætan,” or “self-eaters” “contains an inner contradiction … they only eat strangers.” (32) This, she notes, serves “as a locus for the consideration of the relationship between self and other.” (33) If Mermedonia is confused with Britain, if the English are cannibals, if monsters are human, and if the Wonders are not clearly delineated and contained, what remains to articulate the boundaries of humanity?

Asa, that map alone is reason enough to praise you once again. The crazy trajectories, the teleportative travels, the disorienting emplacement ... well, the choice of vivid pink to mark it all seems exactly right. The map thus brought to life reminds me of the much later, insane cartographies of Opicinus de Canistris, where borders are likewise violated and maps are indistinguishable from bodies.

And that makes me wonder: how risky is to to employ, say, the Cotton Map as a heuristic for organizing the imagined world? That is, do you think that the audience for Andreas or Wonders of the East would carry such a geographical organization in their heads already, or is geography more likely be the creation of the text they encounter rather than an exteriorized knowledge?

Really what I'm underscoring is my ignorance when it comes to early mappaemundi like the Cotton Map, and my wondering if they are one cultural intervention among many to organize world space, or can even the earliest one be seen as encoding an established world view? Would a reader have to have the Cotton Map at hand in order to recreate the trajectories you have superimposed upon it? Or is reading Wonders of the East the textual analogue of Opicinus, a kind of uninhibited play with place and meaning, one that generates space more than traverses a pre-existing geography?

JJC -- Yes, I'd agree absolutely that this exercise is "risky." I will be using this self-consciously absurd mapping of the journey in the new book to show that Anglo-Saxons didn't conceive of geography in these terms, at all. I think you are likely right that the audience would not have such a map in mind, and did not really think of the world in terms of top-view maps, as we do. Rather, geography, at least locally, would have consisted of landmarks and topography, which are rarely as linear and organized as modern maps.

Joining the discussion a bit late, and also without having read Blurton (orals reading is in high gear, I fear, and my copy has yet to come in at Butler) I wanted to jump in to comment on something you said, ASM -- I think you are likely right that the audience would not have such a map in mind, and did not really think of the world in terms of top-view maps, as we do. Rather, geography, at least locally, would have consisted of landmarks and topography, which are rarely as linear and organized as modern maps.

First -- it's a fascinating exercise, as we've discussed via email awhile back, attempting to map the wonders. Back when I was writing a paper on the topic (something I one day hope to get past the seminar paper format and into print), I found a term used Landscapes of Desire (Overing/Osborne) quite helpful.

In their introduction they use what they call a “conceptual map” to plot the epic poem Beowulf. “Conceptual maps,” they explain, “usually offer the point of view of someone who dwells in a place and projects his or her idea of this home place as opposed to other places.” By their definition, conceptual maps project a relationship, one of a specified home-place to the wider world around it.

I think, in a sense (and I'm sorry for the disjointedness of this comment, I was trying to cut and paste part of my introduction and then revise to make it a suitable comment), it's precisely the "conceptual geography" that's at stake. Your post raises an interesting question as regards that idea of a conceptual geography -- how can any concept of a "human identity" survive in a world where what should be "out there" or "far away" is only "in a certain land" which remains -- moreover, what happens when your monsters and wonders are, as in Wonders of the East, not only constantly referred to as "people" (I don't have the precise wording) but are also "thought to be men"?

I think I'm only rephrasing your questions -- but perhaps the distinction of conceptual geography might be a helpful one. Fascinating discussion....

I was rereading Sara Ahmed's Queer Phenomenology this morning for a different project, and these lines struck me for their resonance with this discussion:

"Orientations, then, are about the intimacy of bodies and their dwelling places ... The work of inhabitance involves orientation devices; ways of extending bodies into spaces that create new folds, or new contours of what we could call livable or inhabitable space. If orientation is about making the strange familiar through the extension of bodies into space, then the disorientation occurs when that extension fails. Or we could say some spaces extend certain bodies and simply do not leave room for others." (9, 11)

What a different system Asa and Heather have described: not one that excludes others, but rather one that through trajectories vagrant or all too wide ends up bringing the others and selves into very uncomfortable proximity.