And dream of sheep 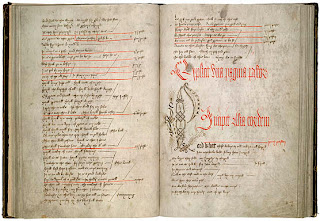 On Thursday evening of last week I attended a production of the Second Shepherd's Play, a music-heavy interpretation mounted by the Folger Consort and enacted within the beautiful and intimate Folger Theater. Next came a day-long workshop on the play, mounted by the Folger Library and featuring a cast of fifty scholars -- everyone from Alexandra Johnston (founding director of Records of Early English Drama) to graduate students just beginning thesis work. I moderated the closing panel, so felt like I had to sit up front for everything to prevent accidental conferencis snoozidosis and thereby potentially miss something we should speak about in my session (a panel that in addition to Johnston featured Sarah Beckwith).

I am, I must admit, not a big fan of medieval music. This production used it for transitions, interludes, and at spontaneous moments. Though I felt the beginning of a migraine as "Sumer is ycomen in, Loude sing cuckou!" erupted (can't there ever be an "authentic" medievalpalooza without that one?), for the most part the sheer variety of instruments and the technical proficiency of the musicians kept me well entertained. There was only one moment when the music seemed out of place. The play's literally amazing moment occurs when this drama that seems to have nothing to do with Christmas -- featuring as it does a story about sheep stealing, a ram impersonating a baby in a cradle, and course humor about husbands and wives -- is suddenly interrupted by an angel who comes out of nowhere and announces that Christ has been born. The shepherds find themselves wrenched from a story in which they believe themselves protagonists and reduced to mere side characters in something far more important. All the action which preceded the angelic revelation is retroactively transformed into a scandalous parody of the Nativity, with the Lamb of God being played by a stinky ram swaddled and placed in a crib, watched over by a woman who is no virgin and man who only hopes to eat it (and not because this Lamb is the Eucharist ... but you see the layers). In the Folger production, a long musical interlude transitions the audience from the secular to the reverent sections, changing the aural landscape enough so that the angel's appearance is not a startling eruption but an expected culmination.

One other problem I had with the play (a play I would highly recommend all the same to all ITM's DC area readers): my point of identification throughout the drama was the sheep, played by a puppet so ugly and ungainly he was cute. The puppeteer (who at the nativity plays Mary) was good at making the sheep's animal interjections comment upon the human conversations. The sheep's refusal to be a proper baby when placed in the crib is hilarious. Given all this challenge, it made me groan when the manger scene was staged and the lamb came over and -- just like all the human actors -- bowed to the plastic doll that was supposed to be a Christ child. How out of character! I felt ripped off.

I left the workshop on Friday thinking what an underappreciated play the Second Shepherd's is. Almost everything we thought we knew about it has been proven false over the past decade or two. The time is ripe for a critical re-evaluation. Expect to read much new scholarship on it (and on medieval drama more generally) in the years ahead. The Folger workshop made clear how much work remains to be done.

UPDATE 12/17
Here's another participant's take on the workshop. Here is a roundup of fun facts. Here are three relevant podcasts. The one featuring Theresa Coletti (also at the workshop) is especially good.

The puppeteer (who at the nativity plays Mary)

Please please tell me the puppeteer did the typologically appropriate thing and manipulated the puppet with his or her womb ("uteripulated" (here recalling that "manipulate" comes from manus + a root of plenus, full)).

can't there ever be an "authentic" medievalpalooza without that one?
Agreed. I might want a song or songform with which I was utterly unfamiliar, something that uprooted my sense of my identity having a share in the distant English past. Loude sing cuckou seems designed to signal authenticity, to reintroduce the audience into the familiarity of the medieval; it's too complacent a choice.

Ah, right. The use of Loude sing cuckou, also, reminds me of nothing more than the middle two graphs on this page.

"Almost everything we thought we knew about it has been proven false over the past decade or two."

If JJC or anyone else would like to share some examples of key points or articles related to this, I'd be very grateful.

Hope everyone is full of nondenominational joy. I'm up to my arms in grading before I head home.

Karl: alas, this kind of cleverness was not in the director's bones. She described herself at the workshop the following day as a person of faith, and that reverence was everywhere evident in the staging. The carnality of medieval devotion likewise got much attention during the workshop, but was not much of a feature of the production (in which there was carnality, but of the sort that needed to be transcended to reach the nativity moment).

blb: Here are some of the things that come to mind for me. I am by no stretch of the imagination an expert abut this, so I hope some reader will jump in and expand and/or correct the following.

It used to be thought that medieval drama had to belong under big rubrics like "mystery plays" or "cycle dramas." Such designations assumed that individual plays belonged to a very large series that likely had been generated and sustained by a specific town -- this, the York or Chester or Wakefield or N-town cycles. This series would begin with a creation play and end with the life of Jesus, all of biblical history condensed into episodes.

While some dramas undoubtedly belonged to such big cycles, recent scholarship has emphasized that not all plays need have. That is, we don't need to think of the Second Shepherd's Play (for example) as having belonged to anything larger than itself. It need not have been staged on a wagon for a civic audience. It could well have been a one-off production, and could as easily have been staged in a lord's manor as in a town or a monastery. The lines and characters would likely have been adapted to the specific circumstances. The play, that is, was a living and changing thing. Also, we have no idea what centuries such plays belong to -- anything from the 14th onwards. 2nd Shepherd's is no longer associated with Wakefield. The reason it was written down in the manuscript is hard to determine: a Catholic recusant family attempting to maintain ties to a fading tradition? Was it the Marion material that appealed at a time when Mary was vanishing? Almost everything about the play is up for grabs.

Another way of putting this would be to say that the Second Shepherd's Play -- like other medieval dramas -- had until recently been prisoner to a historical context that turns out to be more fantasized than provable. These works have now been emancipated, and that freeing has reinvigorated them.

One more thing: medieval drama has also been disentangled from the generic and evolutionary narratives in which it had long found itself, so that it medieval drama is no longer seen as a bounded and well defined genre, or evaluated as a mere prelude to Shakespeare. That is, the current emphasis is upon the dramas themselves (in all their possibility and complexity), rather than using them to look forward to the early modern. Also, as Clare Sponsler pointed out, it is likely that much more drama existed than we have records for ... and also that much more of this drama was written down than we realize, only it was not written down in a form we recognize as drama. She argued -- very persuasively -- that we need a larger conceptualziation of what is performative/"dramatic."

Have people argued then that the Records of Early English Drama hurts as much as they help? It's great to have records that let us know how much we're missing, but perhaps the REED guidelines--and I should say, I don't know what they are off hand--delimit too firmly, because of the authority of REED, the outer boundaries of what gets counted as drama?

I know I must be getting this critique from some article(s) I read during my orals, but which one I don't remember...

Karl, you're remembering Theresa Coletti's article on "Reading REED" from that early 1990s Lee Patterson collection. Patricia Badir has made similar arguments. My sense is that the REED collections have been broadening their scope over the years, but there's clearly still much to do.

It's the Coletti: thanks much, Rob.

Thanks, Rob. And apologies everyone for the horrific number of typos in my comments. Even Claire Sponsler got her "i" poked out.

JJC et al: Thanks very much! These are important and useful to hear. I've encountered the disentangling-from-the-grand-narrative before, from the work of some colleagues and from an excellent grad seminar on medieval drama.