The Chartres Donatus Cliché Can Mean Only One Thing 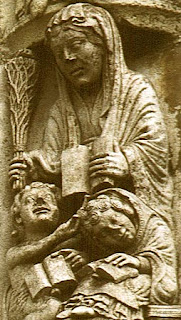 And here's the medieval follow-up to the previous exam, presented below the fold with the same request: why not share your final exams when it's safe?

Medieval English Literature
Identification (5 points)
Answer five of the ten questions below. The first five correct answers are worth a point a piece. Extra Credit: each additional correct answer after the first five is worth a half point; thus 7.5 points in all are possible on this section. Your answers will generally be no longer than a sentence; often, a word or two will be sufficient to get the answer correct. Precision counts.

1) How does King Uther finally recognize Cleges?
2) In what work can you find the lines “Sum stode withouten hade, / And sum non armes nade, / And sum thurth the bodi hadde wounde, / And sum lay wode, y-bounde, / And sum armed on hors sete, / And sum astrangled as thai ete; / And sum were in water adreynt, / And sum with fire al forschreynt.”
3) In what work can you find the lines, “They wente to the courte of Rome, / And browghte the Popus bullus sone, / To wedde hys dowghter dere”?
4) In what work does a priest bless a dying werewolf?
5) In what work will you find the lines, “My lord and all his kind / will never believe me / when they hear about this bad luck; / indeed, I condemned myself / when I slandered all womenkind”?
6) What was or were the original language(s) of the following (partial credit is possible): The Romance of Tristan? The History and Topography of Ireland? Pearl?
7) List two works whose plots are set in motion by knights running out of money.
8) When Gowther fights the Saracens for three days in a row, he wears a different colored suit of armor on each successive day. What are the colors? (+0.5 if you list the colors in the correct order)
9) Who loses a nose?
10) What happens in Pearl when the Dreamer tries to cross the river?

1) In the Song of Roland, Ganelon declares “Because of Roland I had lost gold and possessions, and it was for that reason that I set about to cause his death and his ruin. But as for treachery, I will not admit to anything of the kind” (Laisse CCLXXII). In what way is he justified in refusing to admit treachery?

2) Why does Sir Gawain and the Green Knight start with the siege of Troy?

3) Guinevere accuses Lanval of having “no interest in women. / You have fine-looking boys [Vallez avez bien afeitiez] / with whom you enjoy yourself.” Given that vows of chastity were common in the Middle Ages, why do you suppose Guinevere accuses Lanval specifically of preferring boys when he refuses to have sex with her? You may provide more than one possibility.

4) Comment on the death of Roland in Laisses CLXXIV-CLXXVII: what do these details suggest about this culture's values? Concentrate, if you like, particularly on what Roland does with his glove; ALTERNATELY: comment on the significance of the use of the possessive pronoun “our” in the first laisse of the Song of Roland.

5) The lai “Yonec” is named after a character, the son of Muldumarec (the hawkman), who barely speaks and whose primary action in the lai is to cut off his stepfather's head. Why do you suppose Marie named the lai after this character rather than his biological father or after his (unnamed) mother?

6) What would Gawain have had to do if he had been seduced by Bertilak's wife? Why do you suppose Sir Gawain and the Green Knight included this possibility?

7) Discuss the significance in Sir Orfeo of the barons' words “it is no bot of mannes deth!” (552). Here you might want to consider Orfeo's several methods of compensating for or rectifying Heurodis's disappearance.

8) Tristan and Iseult have numerous opportunities to lie in the Romance of Tristan, yet they prefer to tell half-truths. Hypothesize about why they don't tell outright lies, preferably by reference to a particular half-truth (e.g., “I swear that no man ever came between my thighs except the leper who carried me on his back across the ford and my husband, King Mark” (section 15, 142)).

9) Comment on the significance of Gowther's refusal to give up his falchion.

Seriously, though, the course looks like it was fun.

Here is my final Chaucer writing assignment. We didn't have any in class exams since it was a Writing in the Disciplines course.

Your response should be printed out double space and handed in to my office by 5 PM on Thursday 12/13. You may use your notes and your text, but do not use the internet or collaborate with any other class members. Good luck!


I. Take the following two passages from the Canterbury Tales and:
1.identify the passage by work, speaker, and context
2.rewrite as a literal translation into Modern English

A."Blissed be God, that I shal dye a mayde!
Yif me my deeth, er that I have a shame;
Dooth with youre child youre wyl, a Goddes name!"
And with that word she preyed hym ful ofte
That with hys swerd he wolde smyte softe.

B."We shul first feyne us cristendom to take --
Coold water shal nat greve us but a lite! --
And I shal swich a feeste and revel make
That, as I trowe, I shal the Sowdan quite.
For thogh his wyf be cristned never so white,
She shal have nede to wasshe awey the rede,
Thogh she a font-ful water with hire lede."

II. Choose THREE of the following four passages and:
(1) Briefly identify the passage by work, speaker, and context.
(2)Paying close attention to the images, structure, and language of the passage, explain its significance to the themes of the tale in which it appears.
(3)Making specific reference to other tales, explain the significance of the passage to the themes of The Canterbury Tales as a whole.
Be ANALYTICAL: do not merely summarize plot.

A.The gees for feere flowen over the trees;
Out of the hyve cam the swarm of bees.
So hydous was the noyse -- a, benediciteee! --
Certes, he Jakke Straw and his meynee
Ne made nevere shoutes half so shrille
Whan that they wolden any Flemyng kille

B.Hir yelow heer was broyded in a tresse
Behynde hir bak, a yerde long, I gesse.
And in the gardyn, at the sonne upriste,
She walketh up and doun, and as hir liste
She gadereth floures, party white and rede,
To make a subtil garland for hire hede;
And as an aungel hevenysshly she soong.

C. He lulleth hire; he kisseth hire ful ofte;
With thikke brustles of his berd unsofte,
Lyk to the skyn of houndfyssh, sharp as brere [briar] --
For he was shave al newe in his manere --
He rubbeth hire aboute hir tendre face,
And seyde thus, "Allas! I moot trespace
To yow, my spouse, and yow greetly offende."

D. The cursed Jew hym hente, and heeld hym faste,
And kitte his throte, and in a pit hym caste.
I seye that in a wardrobe they hym threw
Where as thise Jewes purgen hire entraille.
O cursed folk of Herodes al newe,
What may youre yvel entente yow availle?


III. In a well-reasoned essay, argue for what Chaucer’s depictions of the following women have in common: Cenobia, Emilye, Dorigen, Alisoun in the Miller’s Tale, and the Wife of Bath. You may bring in other characters if you wish, but concentrate upon these five. The essay should be no more than three pages long.

It's arithmetic. I hate converting from letter grades to numbers and then back to letter grades. So students drop by wondering if the 21/35 on a paper means a 'C' and I say: I dunno.

And the numbers give me arbitrary assignments of numbers, my waffling, yes, between a 6.3 and 6.7 answer, a thicker patina of legitimacy.

argue for what Chaucer’s depictions of the following women have in common: Cenobia, Emilye, Dorigen, Alisoun in the Miller’s Tale, and the Wife of Bath
They're all ladies? They all have at least three vowels in their name?

Your class looks fun, too: you've chosen some surprising passages.