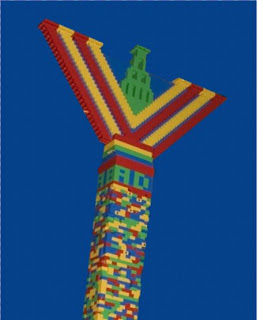 Hanukkah has dwindled over the past decade.

An unease arose over its Expansive Powers of Holiday Magnetism -- its penchant to draw to itself the trappings of winter solstice festiveness, trappings previously reserved for pagans and Christians. Jews who once argued that a menorah should be placed alongside the Christmas tree in shopping malls grew suspicious of Hanukkah's prominence. Newspapers now obligingly refer to the holiday as minor, and emphasize that it is a historical commemoration rather than a religious one (footnote: apparently the miracle of eight days of oil belongs to chronicle rather than divinity). Serious Jews will often offer that they don't celebrate the feast, mainly because tradition insists that there really isn't much to celebrate. It is simply not an important component of the ritual year.

Really, though, that downplaying seems to me a reaction against the evident syncretism of the holiday, and its modern growth -- especially as secular Jews attempted to create for themselves something on a par with the all-consuming behemoth of December 25. The dismissal of Hanukkah is hard to disentangle from a dismissal of Jewish secularism.

Who cares if Hanukkah has become so enmeshed within Yule that it is difficult to extricate? Who cares if it is now as much about lighting candles against winter dark -- and, really, lighting the home with the Christians, engaged as they are in their own rituals against the long nights -- as it is the commemoration of a historical act or of a small miracle?

Well, lots of Jews care. It doesn't matter that Jesus likely was not born on December 25, that the day was perhaps chosen to compete with the week of festivating, gift giving, gambling and indulgence the Romans called Saturnalia. Personally, I like the fact that Hanukkah has expanded to fill a space that it did not previously inhabit, that Hanukkah lives and changes. Though I understand the attraction of having ritual commemorations that seem pure and that seem to stretch across the centuries unaltered (even if in actual fact they almost never do), I still prefer my holidays to be ones that breathe. The all too secular Cohens will lighting the family chanukkiah, spinning dreidels and exchanging gifts tonight.

Happy minor historical commemoration to you, readers.
Posted by Jeffrey Cohen at 7:45 AM

well, from this secular non-Jew's (AFAIK) POV, the marketing efforts to merge Christmas and Chanukah cheapen both of the holidays. A colleague who lives in Fairfax county reported to me that the local supermarket had Chanukah gingerbread houses. Me, I just made latkes, because so many of my friends were making them that I had a craving!

Hope yours has been good so far!