More Beowulf for the holidays 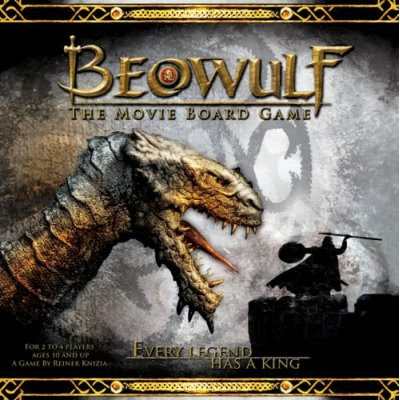 From a lovely little perch in Reagan National Airport,* where the gathering gloom is delaying flights out of historic Washington DC right and left, I bring you glad tidings of great joy!** Not only can you enjoy Beowulf the video game for X-Box 360 (what ever happened to "Super Nintendo"?) and Beowulf the Board Game (as reviewed by King Alfred at Bitter Scroll), but now we have this addition to our Beowulf themed gaming options: Beowulf THE MOVIE Board Game.

An excerpt from the "rule book" (found here):

[E]ach player strives to tell the most epic version of the Beowulf saga. To this end, each player takes control of Beowulf himself, guiding the hero and his companions to recount the chronicle in the most exciting way possible.

Ah yes. This holiday season, you can test your story-telling skills against your friends and loved ones, and for once -- perhaps disappointing those of us who took the time to learn Siever's half-line types in the hopes of a future career as a scop*** -- meter doesn't count.

I can't speak for it, only having learned of the movie-game's existence earlier today, but as a piece of Beowulfiana (an exciting notion in and of itself), there's a part of me that almost wants to spend money on it, though I highly doubt I'd ever play it. As to my experience with other versions of the board game...I think I'll practice a bit of (Old English) reticence on that point.****

Thanks to commenter LJS for the links!


footnotes:
* By which I mean sitting on the linoleum floor outside my gate at the only free electrical outlet I could find in this wing of the building.
** By which I mean small rays of sunshine that briefly allay the tedium of 7 hours of delays. Side note: What on earth did people do before WiFi?
***Am I the only Anglo-Saxonist who has considered this as an alternate career path if the academic job market doesn't work out? Also: Are there hirings for scops these days?
****By which I mean I don't consider myself entirely responsible for my poor board game choices when seeking to avoid boredom when attending seminars in West Virginia.

You are mere miles from the Cohen home! We wish you glad tidings ... you've probably flown over our house already.

I'm holding out for the Yvain game. From what I understand, if you don't follow the rules, you have to eat raw venison. And, uh, get rubbed down with magic cream.

MKH: maybe this will teach you not to leave NYC? All best, and good luck.

But do I get befriended by a passing lion?

I'd prefer the Sir Gawain and the Green Knight game. The rules are inscrutable, you don't even know you're playing when you're in the midst of the challenge, and decapitation is a constant threat.

My friend Katharine, one of the grads in the Medieval and Renaissance MPhil with me at Cambridge, gave a witty and erudite review of the Beowulf game at PlayDigital, her online video game review site.