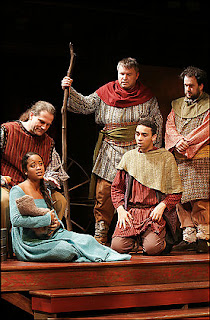 Peter Marks of the Washington Post finally got around to reviewing the Folger production of the Second Shepherd's play. A little research -- even at the excellent Folger website for the play -- would have prevented some of the errors in the piece. The saddest (if most predictable) part of the review, however, is its take on the Middle Ages: simple, child-like, lacking in sophistication and complexity. Thus:

the rudimentary plot advances from the low comedy of the shepherds' deception by Brownstein's thieving Mak and his wife, Gill (Holly Twyford), to the more sober and reverent atmosphere of the shepherds' pilgrimage to visit Christ in the manger ... Although they're too primitively constructed for us to find them truly funny, the scenes in Mak and Gill's cottage provide intriguing parallels to the scene in the manger ... The actors have a tougher time, as they must contend with the bluntness of the script ... [Mary Hall] Surface [the director] imbues the piece with the feel of child's play. Tony Cisek's set is the delicate suggestion of olden days: a spinning wheel here, an ancient doorway there. Mak's hilly journeys from his cottage to the shepherds' moors are undertaken by a puppet version of the character. And costume designer Erin Nugent cloaks the company in the colorfully rugged fabrics of hard-knock country folk.

There is much to say here, but I'll limit myself to this.

The feel of the play in Mary Hall Surface's production is not at all childlike, but it does have whimsical moments, such as the transformation of Mak into a puppet to enact scenes like mountain climbing or his being tossed in a blanket in punishment for his thievery. These are metatheatrical moments rather than cutesy ones. The puppets are used in as sophisticated a way as the "colorfully rugged fabrics of hard-knock country folk": that is, the director realized that hard-knock country folk do not actually wear colorful fabrics, and intentionally chose not to clad the shepherds in the sackcloth or dirty rags that would have been more realistic. The aesthetic overload evident in the costuming is paralleled in the beautiful way that bitter tempests are conveyed: swirling purple ribbons that loop across the stage to a keen wind generated by the rolling of plush fabric. The highly stylized staging has an emotional impact that a blunt attempt at poverty and frigid weather might not.

The Second Shepherd's Play is neither "simple" nor "primitive." The drama meditates upon the place of redemption and forgiveness in unextraordinary lives, employing sophisticated puns, metonymies for Christ, tropes of cannibalism, animality, class, gender, bodiliness, the carnality of worship ... I've spoken already about how jarring its transformation into a nativity scene is, and how the sudden arrival of divinity retroactively transforms the whole performance. It's a brilliant and sophisticated drama.

Posted by Jeffrey Cohen at 7:52 AM

My name is Nelson A. Colón and I am a senior photo editor at W.W. Norton. I am in the process of procuring high-res files of images for inclusion in our upcoming 3rd edition of The Norton Anthology of Drama, and we are interested in the image of The Second Shepard's Play, as seen on your blog, here: http://www.inthemedievalmiddle.com/2007/12/lazy-review-of-second-shapherds-play-in.html. Do you own the copyright to this image? If so, could you send me a high-res file of the image and let me know what information you require to help facilitate the licensing of it? And if not, can you tell me where you procured it? We are in a bit of a time crunch, so we'd appreciate hearing from you soon. Please email me at ncolon@wwnorton.com.