The Future is Entropy 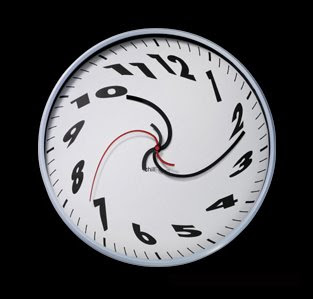 Via the Edge, here is Sean Carroll on the arrow of time:

Our experience of time depends upon the growth of entropy. You can't imagine a person looking around and saying, "Time is flowing in the wrong direction," because your sense of time is due to entropy increasing. . . . This feeling that we're moving through time has to do with the fact that as we live, we feed on entropy. . . . Time exists without entropy, but entropy is what gives time its special character.

Entropy is for Carroll what gives time its "appearance of forward motion," its "directionality, the distinction between past and future." Entropy is also the guarantor that time moves in one direction only, and is not (despite all our searches for lost time in imagining time machines and time travel in our speculative fiction) reversible.

The long and the short of it for medievalists: fieldwork in your area of study is not going to be possible. On the positive side, though, Carroll's work also suggests that this universe may be a fragment of an infinitely larger multiverse -- one in which, for example, you are not a graduate student locked in a dank archive for the summer but the actual ruler of the Angevin empire. Think of that as you are coughing at all the dust on that parchment you're scrutinizing.

As for me, I'm in my office right now, because I've agreed to evaluate THREE tenure and promotion dossiers this summer. The only thing that gets me through this chore is knowing that in some other universe within this multiverse some other Jeffrey J. Cohen is worshiped as a living god and resides on a perpetually sunny beach.

Jeffrey: I happen to be in that other part of the multiverse right now and I want you to know that we *are* worshiping you as a god. The only problem is, our rites of worship here involve slathering you with fish oil, tying you to a bark, and setting you out in shark-infested waters. Sorry, but that's how we do things here in this part of the multiverse. But you are a god. Be rest assured.

I will take what I can get. Perhaps after my sacrifice at sea and attendant ingestion I will emerge from the shark's belly with unheard of new powers.

Or maybe not. Still, I can dream.

At the very least, I can promise that Marshall Sahlins will write a book about you. He's here, too, doing field work.

Now if you wanted to be super-cheeky you'd have said that it was in fact Gananath Obeyesekere who was being worshiped as a god in this alternate universe, much against his will, and perhaps with Sahlins as a grinning acolyte, or better the priest charged with strapping him to the shark-bound bark ...

But I'm jet-lagged, Jeffrey, and super-cheeky is beyond me at the moment. The best I can do is cheeky. Hey, aren't we supposed to talk about smart, intellectual stuff around here?

Making jokes about the Sahlins-Obeyesekere conflict about deification, desire, and culture bound thinking: hey that sounds smart and intellectual to me.

OK, maybe it's just pretentious. Would it help if we were swirling our sherries as we made such obscure allusions passing as humor?

Have fun in Leeds, Eileen, and I will finish that P&T letter I've been working on since 9 AM.

I hate sherry. Can it be a martini? Okay, I'm really signing off now. I have to crash. Good luck [and great thanks, as always] for all that pro bono *bono* work you do!

Of their summer reading I have just started Colin Renfrew's Prehistory: the making of the human mind. Maybe I'll report back in a few train journey's time.

You see, this is the moment where I want to be snarky and say "but the time is out of joint!"

I wonder though if it's really that simple. Yes, the milk disperses into the coffee, illustrating disorder and entropy. But the do the molecules change irrevocably? Or are there milk molecules in with the coffee molecules?

Plus I wonder what it means when little pieces of the past move forward in time (texts, objects).

Okay, back to the archives, while dreaming of my multiverse self who's in charge of an empire...

You know, that article crept into my sleep last night, and I am not at all satisfied with the multiverse explanation: it just seems like what he has done is to identify an unlikelihood, have a hard time explaining it, and then NOT explain it by pushing it off into an undiscovered realm (this universe is an intrusion or obtrusion or whatever of some more sensical multiverse). I still don't get why time can't flow backwards -- I mean, I understand why humans can't experience that backward flow, but if time is as substantial as space, why can't it be backwards traversable?

But I'm just an English PhD so I leave it to those who have access to particle accelerators to answer.