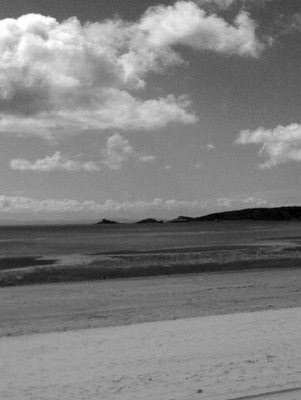 Yesterday I posted some thoughts on the recent New Chaucer Society conference in Swansea, focusing upon professional and scholarly impacts. Then to lighten the mood I offered a slideshow of Welsh castles, including a lesser-known fortress called "Kilvey." Today I offer a vignette more vagrant and more personal in its trajectories.

When I think back on the event, I am certain that a gun and a speeding car were involved -- but for the life of me I can provide no real evidence of either bullets or excessive speed.

With a herd of fellow medievalists I was crossing the Stalinist dystopia of the University of Swansea campus. We were headed towards a bus, about to be transported to the Gower peninsula and a much-needed infusion of scenicness. A VW Passat screeched to a stop in front of me, narrowly missing a dawdling philologist. Stephanie Trigg flung open the passenger-side door. She was clutching an impressive firearm of some sort -- at least she was in this, my dream reconstruction of an event that in reality started with significantly less drama.

"Get inside!" she snarled from the car. (Yes, she snarled. You wouldn't think it from all her sweetness and light at Humanities Researcher, but she actually snarled). Her snarl offered no hope for negotiation or pleading. Yet I did hesitate, and I muttered something about scenicness, the Gower peninsula, the promised land. She stared at me coldly and flatly declared "We'll take you somewhere much more picturesque."

What choice did I have? I got inside the Passat. There I beheld her accomplices in the abduction: Tom Prendergast and George Edmondson. They were smiling serenely, as if guns and kidnappings and speeding off from the conference happen all the time at NCS.

And now the part of the sequence that needs no dream for enhancement. We headed to Langland, where we found a pub built where the rocks of the shore meet the sand of the beach. The sun was low, the tide was approaching, dogs and their owners strolled the water's verge. Each of us sat with a pint of something cold on the table in front of us. We smiled at the air's briny scent and the ocean's looping timbre. We laughed at each other's bad jokes. We had the welcome chance to know each other well.

Our eyes were drawn, inevitably, to the beach. We watched children, dark wetsuits against the water's chill, build a circular fortress of sand, an affront to the path of the oncoming tide. The walls of their fortification mounted as the waves neared. The children knew that the labor of their hands was useless, that the sea was going to breach their walls and wash away their work. Yet they toiled at the castle, immuring themselves in a steep ring of sand, the dust that ages of water smashes from rocks. Their laughter seemed the declaration that what they had fashioned might stand against the verging tide, that somehow if they only built high enough and thick enough and fancifully enough -- that if they willed their work's permanence with enough desire -- then the ocean's ebb would falter, its assault halt at the rebuke of their artifice.

The water breached their walls. The ditch vanished beneath a sudden surge, the palisade dissolved, the bailey was wiped from the beach like a memory past edge of recollection. The children screamed with delight. The fortress had been shored not against ruin, but for ruin alone. Its art was in its undoing. In the memory of the architecture, in the memory of the pleasures shared and the fleeting community formed, in the hope of future castles and future unions of friends, sea, and sand: that was the vision that we saw on the beach, we four medievalists who were dreaming our pasts yet to come.

[photo of Mumbles by author]

Posted by Jeffrey Cohen at 1:45 PM

Tried to comment last night, but I think it got swallowed. Don't post it if it turns up, but note only this. The really disturbing image here is this: "Stephanie Trigg flung upon the passenger-side door".

Let's not look too closely, folks, at either Jeffrey's dream, or his dream-work...

I won't go there if you don't. I did correct the mistake, though.

All I can say is that it is a good thing I left out the bit about the dancing Geoffrey Chaucer clad only in a pink feather boa. I don't even know what to make of that, nor of the fact that I can't seem to stop thinking about it.

Oh, and I as I mentioned: there was very little psychoanalysis at this conference. You yourself backed away from the mode even as you cited in your paper what sounded like a version of the classic definition of a fetish, here in the form of the Garter ("We know very well that this dress-up is ridiculous, but all the same ...").

So, yes, if you can disavow psychoanalysis at Swansea, we will do it here as well. Now to use an ice pick to dislodge the feather-bow Chaucer from my psyche.

Well ... (pause to make 22 hour plane trip across the planet. Yawn, stretch, yawn, stretch: thank lucky stars did not travel 24 hours earlier on flight with emergency landing and faulty oxygen masks) ... it’s true I made only cursory acknowledgement to the field while also agreeing that no, psychoanalysis is rarely my starting-point: if ever I start there, I always feel as if I am being taken over. This is not to say I don’t like reading, or don’t profit from, work that invokes its frameworks, or that I don't sometimes try to work there myself; just that it's a site of struggle for me. And ... it’s not compulsory, after all. Is it?

But I do think you’re right to say that psychoanalytic criticism was not much in evidence at NCS. It’s interesting to see how these things come and go in waves. And yes, I expect Aranye Fradenburg’s talk in Siena will galvanise the field some more.