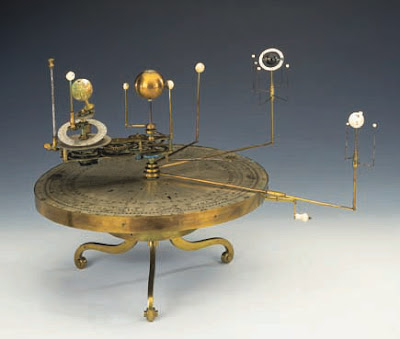 Speculative fiction writer Thomas Disch committed suicide on July 4. His last entry at his LiveJournal site is eerily mundane, about the difficulties of living in a city where $5 pizza slices constitute a bargain. That final post has garnered 111 responses so far, many along the lines of #110: "Your book Camp Concentration made my 14th year livable, bearable, doable ... You never knew, and might not have cared had you known, but your role in my life was profound and necessary."

I first read about Disch's death on Boing Boing. This morning I learned that as well as a novelist, children's book author (The Brave Little Toaster) and literary critic, he was a poet: see the beautiful post on "The Clouds" at University Diaries. I take the title of my ITM post from some of his lines about the suspension of the human between feat and miracle, clouds and earth:

Half engineering, half a work of art;
A human orrery that duplicates
The simple motions of the lungs and heart.
But turn it upside down and it becomes
Confetti circling in a paperweight.

The poem begins with a citation from Hamlet, including the only line from Shakespeare I quote regularly ("Very like a whale"), then moves to a riff on Caliban's passionate vision of his island's beauty -- references that are not surprising, I suppose, considering that Disch's book of SF criticism is entitled The Dreams Our Stuff Is Made Of. "The Clouds" concludes with some words that have been spinning around my head since I read them:

You: you are the cloud I never name,
The language that I cannot learn, the game,
I neither lose nor altogether win;
Illusion of another world above
The world beneath, outside the world within.
I squint, I blink — but still I see you, love.

Read the whole poem, and Margaret Soltan's meditation on it.
Posted by Jeffrey Cohen at 10:21 AM