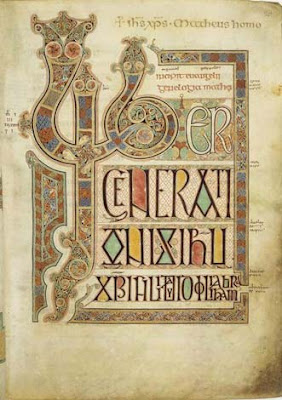 [illustration from the Lindisfarne Gospels -- thank you, BBC!]

Within a few hours of it being posted on the Valve last night, as a result of Scott Eric Kaufman's reading of a blog called "Readin" -- a number of my friends were emailing me about this. I haven't had the time to fully explore the website, but it would seem that UCLA has put together a page that allows for the easy browsing of all MSs that are digitally available online. Granted you may have already noted its existence through a post at ITM all the way back in December, but given that I noted it only in passing at the time, I thought it worth a second look.

Highlights of the virtual holdings include:

• The largest surviving collection of the works of Christine de Pizan, one of the first women in Europe to earn a living as a writer. The manuscript was commissioned by Queen Isabeau of France in 1414 and is now held by the British Library.
• An Irish copy of the Gospel of John, bound in ivory and presented to Charlemagne sometime around 800, now in the library of the monastery of St. Gall in Switzerland.
• The Junius manuscript, one of only four major manuscripts preserving poetry in Old English. Dated to around 1000, the book is now among the holdings of Oxford's Bodleian Library.

As an Anglo-Saxonist, I got no further than the Junius Codex. Along with Exeter, Vercelli, and the Nowell Codex, it houses Old English poetry, including Genesis, Exodus and Daniel. It was also my first Anglo-Saxon codex, which I saw at In the Beginning at the Smithsonian back in 2006. I'd be curious: do other medievalists out there remember their first manuscript? I mean, I'd seen other MSs here at Columbia's RBML, and at various museums and such. But to see the Junius, in person, even if I didn't get to "read" it more closely than through the glass protecting it -- that was pretty amazing.

I also couldn't help but think about the materiality of the codex. Of course I've gone on about this before. After a full semester, however, of one class on paleography and another on medieval book culture (the latter with Chris Baswell, who is part of the team that worked on assembling the UCLA site), I can't help but think about the objects themselves. Perhaps it's the lingering questions raised by Jeffrey's Weight of the Past talk last week, but I do tend towards feeling rather strange about digitized manuscripts. As teaching resources, they make the kind of intense paleographical work I did with Professor Dutschke possible in a way that before it would not have been outside of a few select places ten years ago.

However it also raises the question that all digital technology raises: that is, access. In this case, it's a question of access to the past. I'm working on a cataloging project with Prof. Dutschke for a few hours a week (along with several colleagues) -- and what I've realized is that there is so much to a manuscript that perhaps no digital reproduction, however fine, can represent. For example, I've often felt too squeamish to be a medievalist -- the thought of reading books that are written on animal skin often makes me hesitate to touch a manuscript. This Monday, for example, I sat in the Rare Books reading room and looked through a Chronicle written on parchment. The material of the text was utterly beyond my comprehension -- in addition to being in what was one of the worst late medieval hands I'd ever seen, the text was in German, a language I am slow to read when it's legible. However, the materiality of the book, the object itself, was exceedingly clear. Vellum, like un-moisturized skin, wrinkles. Yes, wrinkles. Texts age, and do so visibly. It's oddly similar to human skin in that regard.

This all tied in quite nicely to my Intro to the Major class, which I also taught this past Monday. I was introducing some of the ways medieval poetry thought about language, and the authority of the speaking or writing voice. After I gave an "introduction to Old English culture" that made me cringe slightly with its brevity -- we worked with one of my favorite of the Old English Riddles, Number 47:


A moth ate words; a marvelous event
I thought it when I heard about that wonder,
a worm had swallowed some man’s lay, a thief
In darkness had consumed the mighty saying
With its foundation firm. The thief was not
One whit the wiser when he ate those words.

When a poet in the Middle Ages looked at a book s/he didn't see something pristine, like my copy of Klaeber's Beowulf, which is still too new to be dog-eared and worn. Rather, books had long histories already, even when new -- it was not, as it were, their first life. And books were not safe from the ravages of time or even of the worms that also rend human flesh after death. Perhaps its worth remembering that even digital materials have worms which feed on data. Transience, it would seem, was and is part and parcel of textual experience. Rightly so, given that humans create them.

In part, and as always, it seems I've come back around to where I began when I started my musings: materiality and the medieval. We're always dealing, in some fashion, with what's left -- never an established whole, never a static object-of-knowledge. The medieval, it would seem, is always contextual, and therefore always contingent on the kinds of contexts we can find for it. It seems obvious, I suppose -- but every time I open my web browser and look at my first Anglo-Saxon codex, I don't know that I'll always acutely feel the absence of the codex Junius (given that it's not at my beck and call -- or even on this side of the Atlantic). But I do sense another kind of absence -- albeit one that is paradoxically full of lives and ideas and cultures that are always just beyond our ability to recall fully. I'm sure someone else has already said this -- but maybe we're always missing the Middle Ages?

Thanks to Scott Kaufman of The Valve for bringing this back to my attention, and to all the friends who forwarded it to me.

More on something Beowulfian -- the conference for which it is intended -- on the morrow.