The End of the Weekend 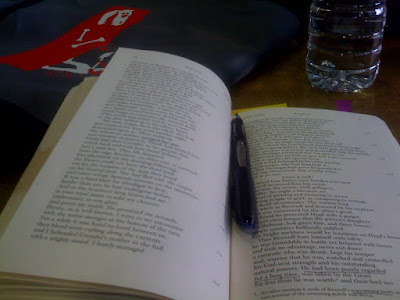 by J J Cohen
[illustration: my Sunday morning reading. Alex goes to Hebrew school, I go to the Seamus Heaney translation of Beowulf in search of something meaningful to say to my 90 students come Monday. Post title pirated from my favorite sex-death poem by Anthony Hecht]

In a few moments I'll join my family downstairs and watch the Superbowl, not out of any interest in which team wins, but simply to be there with them. For the moment, though, I am enjoying a moment of solitude ... and composing a real blog post: not an excerpt from my work in progress, not the kernel of my next article, not a snarky thing about slankets or medieval universities, but a post that ruminates in an off-the-cuff way on the happenings of the past few days.

And those happenings are legion. On Thursday I introduced Steven Knapp, the president of my university and a fellow professor of English, who then introduced Edward P. Jones, currently in residence in my department. The night was the most important since I became chair of my department, choreographed carefully to announce that (1) English reigns supreme at GW and (2) all must bow before the supremacy of English. My evil masterplan worked pretty well, in that the auditorium of 240 seats was standing room only, and the president hosted a well attended reception at his house afterwards. The evening marked the first time that Knapp has had anything to do with the department in which he holds his tenure. Times are a-changin.'

Edward P. Jones himself is an eccentric, smart, solitude-loving and (unlike the charming-to-the-point-of-revulsion but also solitude-loving Nadeem Aslam), quite shy. I love him. Hanging around with Jones has been so much fun: when you find the way to connect with him, he reveals himself as an incredibly witty, humane, and affable person. His devotion to our students is admirable ... and his ability to keep complex worlds in his head (he does not sketch out plots in notebooks, and if you have read The Known World you know how intricate the realms he envisions are: the novel was composed as he walked the other paths of his ordinary life, shopping at Safeway and waiting for the bus). I lingered for a long time after the reception with President Knapp, Edward, and a few donors, then drove Edward home. He lives not far from my house, near National Cathedral and the synagogue at which Alex was studying today while I rererererereread Seamus Heaney's Irishized Beowulf.

Friday David Wallace came to GW to give a talk under the auspices of GW MEMSI. I met David in 1990 or so, when I was still a graduate student and he was, I believe, at the University of Minnesota ... and widely held to be the coolest scholar in medieval studies (yes, I do realize that the competition was not what one would call "fierce"). He came to an afternoon series called "Medieval Doctoral Conference" where various people in various ill fitting clothing would typically deliver a paper about the precise geographical location of the Sir Gawain and the Green Knight Poet based upon a new survey of dialectic evidence, or macaronic verse as an underappreciated genre (take away message: appreciate this verse, because it is appreciable), or ... well you get the picture. There was nothing wrong with such topics, of course, but let us just say that they lacked a certain joie de vivre and did not tend to scintillate in their delivery. David, on the other hand, delivered his paper while slumped -- slumped -- in the throne-like chair in which they made speakers preside. He wore a leather jacket, was damn smart, and said things so unpredicatble and illuminating that I vowed I'd read everything he writes.

I've been very good about following up on that vow.

David delivered a typically erudite talk at GW centered around his latest project, a mapping of European literary history that does not stay within the conventional parameters of Europe, of the literary, or of history. Focused upon the post-plague, post-catastrophe period of 1348-1418, the project breaks into nine itineraries that follow wandering byways along the roads and waters of eastern and western Europe, and beyond, even to Africa: e.g., Aberdeen to Finistère by way of Iceland, the Orkneys, Dublin, and Cornwall; Palermo to Tunis by way of Mallorca, Aragon, Lisbon, the Canaries, Granada. We took him out for dinner afterwards at GW MEMSI's favorite restaurant, and then drinking at our favorite watering hole (ITM's DC venue, and the Tiny Shriner's haunt). We resisted the urge to befez him. All in all an excellent night.

After which I became extremely ill. The migraine that seized me at midnight had nothing to do with David's visit (he is about as low maintenance a medievalist celebrity as you could wish for), but everything to do with Thursday's hoopla: so much was at stake in the Edward P. Jones fest for my department that the stress was for me even higher than I realized. I don't often get a migraine ... and fortunately for me it did not come until Friday had ended, and did not linger past Saturday.

And so I find myself on Sunday evening with a weekend passed, Beowulf digested (not literally: Grendel attempted that, and see how things turned out for him?), and a week ahead that will bring me to NYC and many friends.

OK, and now for that Superbowl. It's a basketball game, right?
Posted by Jeffrey Cohen at 6:36 PM