Readers at ITM and Old English in New York may remember that the topic of my first chapter is the Old English Orosius. You may remember, way back in November, when I revising my chapter on the Orosius, I was having a bit of trouble straightening out the terms with which I spoke of the various voices in the text.

I'm working, again, on revising that same old text. You can see a small snippet of what I've been doing with it here. However, in the past few weeks or so I've been trying to tap into my formerly quite creative side, which sometimes gets sublimated by both a lack of time and a lack of interest. I don't have time to draw anymore, for example. But in the past couple weeks, I've taken to literally sketching out some of my arguments in the chapter, to help me keep straight the number of elements, levels, or names that appear in the essay.

The fruits of today's labor? The following diagram. Please note that, should it make it to the final copy of my dissertation chapter, I'll redraw it and make it a bit cleaner: 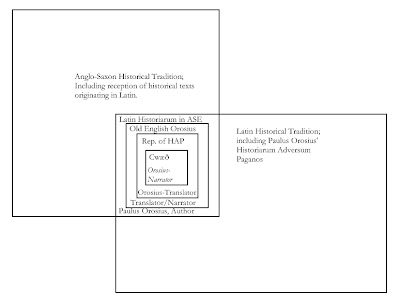 The "legend," if you will, is the following.
ASE = Anglo-Saxon England
Rep of HAP = Representation of the Historiarum Adversum Paganos in the Old English Orosius.
Cwæð = The "cwæð Orosius" construction in the Old English Orosius.
Essentially, I'm trying to represent, albeit somewhat simplistically, the levels of interaction of the Latin and Old English texts. So they intersect where Latin historical texts are present in Anglo-Saxon England. The first level of that intersection is the Latin versions of the Historiarum present in Anglo-Saxon England at the time of the translation. At that point, the attribution of the text can still be to Paulus Orosius, as these are texts in the original language, copies. The next level, then, is the Old English translation. The "voice of authority" is no longer Paulus Orosius himself -- if such a thing is possible to think of, to borrow the Derridean line, and in light of having *just* taught Death of the Author to my undergraduates -- so I'm calling that level of narration/authority the "Translator/Narrator."
This next level is where things get a bit messy. For various reasons, in order to understand the way the source text (the Historiarum Adversum Paganos, by Paulus Orosius) interacts with the translation, the Old English Orosius, I find it useful to suggest a distinction between the parts of the Old English text which are specifically meant to represent the Latin text and those which can only be departures that are the results of an explicit choice on the part of the translator. The majority of the text falls into the first category. Certain sections of the text, like the part in the geographical preface which relates the travels of Ohthere and Wulfstand, fall into the second. These are clear departures from the Historiarum. To express the identification between the translator and the voice of Orosius, I've chosen Orosius-translator. This category is distinct from the explicit, reported speech citations of Paulus Orosius that occur where the text inserts the first person or, more explicitly, the cwæð Orosius (a phrase which occurs fifty times in the text, and means "Orosius said"). To mark the distinction, I'm using Orosius-narrator.
That's a lot of information, particularly for folks who perhaps aren't as familiar with the Orosius. However, the question I have for you today dear readers, is about the use of diagrams in dissertations. Are they a good thing, where they help lay out your thought process in a way that makes your prose that much clearer? Or are they a crutch I should dispense with, and use merely in the draft stages, to help my mind keep track of the many "facts" of the text? Has anyone out there written a book/dissertation/article that makes extensive use of diagrams? Or that uses diagrams at all? How did that work?
cross posted to OENY

Mary Kate: welcome to my world. When I was writing my dissertation, I can't tell you how many diagrams I drew [I shared one here on the blog a while back], but I kept them mainly to myself as a way of thinking through some of my metaphors and ideas more imagistically, so essentially, they were just for me, but I do think diagrams can be really really useful sometimes, and when it comes to complicated transmission & translation histories [and sometimes, complicated theoretical moves], I think they're helpful to readers. The real question would be: can you say/show more succinctly in a diagram what it is much more complicated/lengthy to articulate only with words? Or, does the diagram clarify relationships between texts/stages of transmission & translation that, in your words only, remain a bit fuzzy? And finally, what can a diagram *not* show? What gets left out in the diagram--anything? Are there any relationships that might be obscured, or left just to the side, by the diagram? But generally, I think thinking imagistically like this is really smart, but just keep in mind that no diagram could ever capture all of the possible relationships [or maybe, could ever really show how some elements in your analysis--historical, linguistic, material-textual, and otherwise--could ever really be represented separately], but that's also what makes this useful--because, with your diagrams, you can begin to *see* that, too.

When I was writing my Cambridge, dismembered-body-parts-as-stage-properties dissertation, I made a map of any and all theories I could read pertaining to bodies and objects in terms of their relation to what I wanted to talk about. It was ultimately useful for figuring out my "X" in the map (in terms of, "X marks the spot") -- but as it ended up reading somewhat like a pirate's treasure map (take four large strides backwards through prosthetic theory, turn right at the palm tree), I ended up expressing most of it in prose in the final product.

Include diagrams! You could be the next Latour! Though what puzzles me about the diagram you've included here is the neatness of it all (like Paulus O is contained by the translator, and like the levels don't infect one another), especially given the messiness you describe in the prose version. My idea is that a diagram could be useful to establish large, schematic blocks of information so that you might then move on to more in-depth arguments -- the question is, where do you want to *take* the diagram?

MKH: All is well again. I agree with EJ!

I think diagrams are usually a big help when they map broadscale ideas--as yours has done here.

Since reading on the page is such a linear process in which ideas must unfold over time, the imagistic representation can make an impact all at once. Of course, that doesn't work sometimes: Lacan's diagrams mean absolutely nothing to me, and I don't know anyone else who feels they actually aid in understanding what he's saying.

Certainly this diagram is both cool (or pleasing) and helpful. Of course nothing works for everybody.

Have I ever told you that I am allergic to Venn diagrams? I have been sneezing and nauseous all day.

I admire you for being able to think spatially like that, something I am unable to do. I have sometimes outlined work, but never diagrammed anything.

I was going to mention Tinderbox but Prof. Cohen beat me to it. While a tad dear, Tinderbox (TB) is an incredible piece of software for visualizing data. More importantly, it has, perhaps, the most powerful means of searching data in any program I've seen.

For example, you can create "agents" -- small pieces of code -- that will range over your data searching for odd combinations like all of the Chinese words that I have noted on my blog -- as opposed to all of them that I have in the db -- but only on Fridays and also only those in the context of the words "apples" and "goats" -- well, you get what I mean.

It also has a kind of elegance about it that makes using it actually pleasant.

Finally, the developer -- Mark Bernstein -- is very active adding new features and is one of the most literate bloggers I've read.

Peruse his site and the TB site. Even if it doesn't fit your needs, you should know about it.

Eileen> Oh, I remember that! And I think you're entirely right: there's a sense of needing to see if the diagram makes the point better than any possible words -- I've included it in the chapter as I turned it in to my committee, so we'll see how they respond. Another thing that occurs to me based on your thoughts is that I may be using the diagram *precisely because* the relationships aren't clearly delineated, and I want to emphasize that aspect of it? Very interesting possibilities.

Liza> Very good point. I don't know that I was thinking through where I want the diagram to go when I was drawing it -- I just wanted to think through the process I was describing in a way that helped me think non-linearly. Which causes its own problems.

Steve -- glad you like it, and a good reminder that it won't ever work for anyone. This is something I've been struggling a lot with as my dissertation starts to include what might be considered "traditional" allies of Anglo-Saxonists -- charts and tables.

Ken: I need to check that out. Will do.