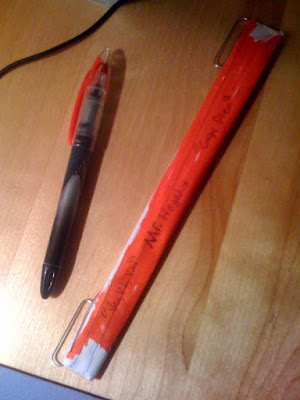 Apropos to a lively discussion that has come to focus on education jobs, as well as to this recent post about mourning, and especially to this ancient post about grieving for a lost teacher (see #6), I want to share with you an event that has preoccupied my family over the past few days. Though its relevance to this blog is at best tangential, writing about it seems (for reasons unclear to me) a necessity more than a choice.

My son Alexander entered sixth grade this year, and thereby transitioned from a small elementary to a vast middle school. The place can seem chaotic, especially in the morning as hundreds of preteens arrive en masse, or when a bell rings and a sudden swarm races for rows of lockers. I feared that Alex would have a difficult time adjusting, but assisted by compassionate teachers he adjusted to his new life without problems.

His favorite teacher this year has been Mr. Hegedus, who teaches sixth grade Ancient World History. Last autumn during visiting day I observed his class. I was impressed. Actually, I was both inspired and a tad envious. Using little more than a dog-eared book, a projector, a seemingly endless bag of Jolly Rancher candies, and his considerable charisma, Mr. Hegedus kept a classroom of thirty eleven-year-olds fascinated by the minutiae of daily life in a Mesopotamian city. The population of this required social studies course is quite diverse, with kids of various backgrounds and motivations brought together for a communal exploration of a subject that likely seems remote from them. Yet Mr. Hegedus made his students feel the kind of palpable connection to that distant past that requires a teacher of great personal magnetism to conjure.

Of course, given that Alex chose to be Augustus Caesar in his third grade wax museum, the Ancient World has been an easy sell to him. He loved the section on Greece because it gave him an excuse to watch the historically accurate film 300 again. He marveled when Mr. Hegedus brought up the topic of Greek homosexuality, and offered that the word gay doesn't always mean the same thing at every time period. He enjoyed composing a letter from a Roman footsoldier to his family at home, describing what it was like to be part of a frontier legion (much emphasis on various military hazings in that one). He already has his toga ready to go for Greco-Roman day at school. I also see that Alex has deeply enjoyed having a male teacher, a first for him.

On Tuesday Mr. Hegedus was driving home from the school at which he has taught for 13 years when he suffered a stroke. Fortuantely he was able to pull to the side of the road before he lost consciousness. When informed of their teacher's perilous condition on Wednesday, students and teachers wept. I do not believe a more popular educator can be found at the school. I met Alex as he walked home that afternoon: he fell against me and cried. Later I took him to his piano lesson, and we had an uncanny encounter with a hawk: the bird sat in a tree watching us with such attention and such fearlessness that it gave us both a feeling of foreboding (even though we knew very well that we were overinvesting a natural event with human significance).

His students had no chance to speak their farewells. The cards they created remained undelivered. Alex told me that the most unbearable part of the day was walking into the social studies classroom, knowing Mr. Hegedus would not be present. Not knowing what else to do, he swiped a pen from his favorite teacher's desk. When I asked him why, he said: "Because the last thing Mr. Hegedus said to me was 'Where is my pen?' He couldn't find it to check off my homework. Now I'll always have it for him."

In class yesterday Alex also created a small memorial to Mr. Hegedus, a sheet of red paper on which he inscribed his teacher's name and his two favorite sayings ("Veni, vidi, vici" and "Carpe diem"). Two paperclips are attached to the plaque. This weekend he will fasten two helium balloons to the clips, and -- as is now his custom -- will launch that message into the heavens, the good-bye he never was able to speak.
Posted by Jeffrey Cohen at 7:35 AM

A catastrophe! Very moving post, and my most sincere condolences for Alex and all the Cohens.

Oh, poor Alex and his classmates. It's so difficult to lose someone unexpectedly.

I attended my first balloon release event this past summer in Winston-Salem, as part of something the local hospice does with their summer grief camp. I'd never heard of it before -- but somehow the release of those notes & words & good-byes seemed so beautiful, so graceful, so important.

My thoughts are with all of you.

Thank you for that entry, Jeffrey, and for sharing your experience with Alex and Mr. Hegedus. I know precisely what you mean about needing to write about this experience without fully knowing why. I think it might have something to do with giving shape to what is otherwise inchoate and giving voice to what is otherwise inarticulable. I'm coming to the point of believing that the pedagogical relationship may be the most important of all outside our immediate family, and the best teachers are those who can still be taught--taught again to see, to hear, and to feel what we think we know so well but that comes upon us again and again as something new.

Yes. The grief of children. A week after the worst of the fires here, we are just starting to see the trauma of childhood loss in Victoria.

I've just come from a two-day planning meeting that was thinking about the medieval and early modern history of emotion. Of course, one of the great furphies of medieval and early modern history is that parents did not grieve for their children. But the grief and mourning of children is a different topic again. Would the processes of historical and cultural change be more, or less legible in the emotions of children?

Anyway, I know the kids in Marysville, Kinglake, Flowerdale, Strathewen and elsewhere will know exactly how Alex is feeling....

My partner's mother was principal of the junior school of a big private school when she had a major heart attack. She was asked to resign, as the council feared the children would be too upset if she died. That seemed to me a rather stupid policy. Grief and trauma are awful, yes, but we need to nurture children through them, as you and the school are doing, rather than shielding them from natural events.

Very moving. But can you please dissuade him from launching balloons? Another word for that is LITTERING. Animals can die from eating those balloon scraps. Really!

Those children had their lives enriched by a wonderful person who leaves the world having made an impact. An inspiration, They were all blessed to have had the pleasure of meeting such a great person.
Bev