BABEL in Boston (2012): A Letter from Kathleen Kelly 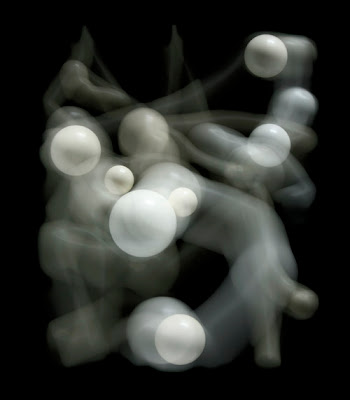 Figure 1. David Fried, Way of Words, no. 2: "Strip your psyche to the bare bones of spontaneous process, and you give yourself one chance in a thousand, to make the Pass."-- William S. Burroughs [from Fried's "Way of Words" motiongram prints series, made with long exposures of kinetic sculptures reacting to the spoken word]

Note from Eileen: for the BABEL Working Group's next biennial meeting, to be held in Boston in Fall 2012 [specific dates still to be determined], we would like as much collective and collaborative input as possible on the conference's themes and Call for Papers/Presentations/Performances. To that end, Kathleen Kelly [Northeastern Univ.] has written the open letter below.

After some brainstorming in the Austin airport with my early modernist colleague Marina Leslie, I drafted a description of a possible theme for the next BABEL meeting. Only after doing so did I see the description of the upcoming conference (“Animal, Vegetable, Mineral”) at George Washington sponsored by the Medieval and Early Modern Studies Institute—Jeffrey Cohen is the director of it, as I'm sure you know—as well as the description of the conference that the graduate students in my very own department are planning for the spring, “Raw Materials,” with Ann Stoler, The New School, as the keynote:

The quest for raw material continues to drive the exploration of both real and imaginary worlds. As scholars, it leads us to the archives, marketplaces, printers’ shops, cutting-room floors, and classrooms in which “materials” undergo processes of alteration, transformation, and manipulation—materials that could be understood as the productive elements of texts, subjects and selves, bodies, empires, and nations.

While “materiality” has held a rooted place in scholarship, we are particularly interested in examining the concept of the “raw” and “raw material.” The term itself embodies the tensions inherent in projects of creative, cultural, financial, and national enterprise. Raw material is, as Marx writes, “the fish which we catch and take from their element, water, timber which we fell in the virgin forest, and ores which we extract from their veins.” It is the matter of labor and empire, and evokes both images of creation and potential, as well as processes of destruction, exploitation, and misappropriation. We invite papers that may explore the dynamics of labor processes; that may consider the significance of raw material to creative, cultural, financial, and national projects; that may examine raw material as physical, tangible, and corporeal, as well as imaginative and ephemeral; and finally that may map the discursive processes through which the raw material of human experience is shaped, produced, exchanged and deployed.

200-word abstracts may be sent to neuegsa@gmail.com by December 20. Please include your name and university affiliation.

Apparently I have managed to be in touch with the zeitgeist and out of the loop at the same time . . . I have post-hoc precursors.

On the other hand, I remembered the work of Sherry Turkle at MIT, and what she’s been doing would fit in marvelously well with what you will read below: she is the editor of Evocative Objects: Things We Think With (“Turkle collects writings by scientists, humanists, artists, and designers that trace the power of everyday things. These essays reveal objects as emotional and intellectual companions that anchor memory, sustain relationships, and provoke new ideas”), Falling for Science: Objects in Mind (“‘This is a book about science, technology, and love,’ writes Sherry Turkle. . . . a love for science can start with a love for an object—a microscope, a modem, a mud pie, a pair of dice, a fishing rod. . . . distinguished scientists, engineers, and designers as well as twenty-five years of MIT students describe how objects encountered in childhood became part of the fabric of their scientific selves”), and The Inner History of Devices (“Memoir, clinical writings, and ethnography inform new perspectives on the experience of technology; personal stories illuminate how technology enters the inner life”)—blurbs courtesy of MIT Press. A local resource! Also, Eileen sent along this essay, "A Faustian Bargain," written by Gregory A Petsko, Professor of Biochemistry and Chemistry at Brandeis—another local resource!

So, I'm looking forward to hearing your feedback on the *draft* Call for Papers (appended below) and/or on other ideas you may have for 2012. Right now, I’d like something to shop around, especially to secure funding and one or two plenary speakers—whatever we come up with can be fleshed out later.

Objects of Study (or? Object Lessons)
Is there something perverse, if not archly insistent, about complicating things with theory? Do we really need anything like thing theory the way we need narrative theory or cultural theory, queer theory or discourse theory? Why not let things alone? Let them rest somewhere else—in the balmy elsewhere beyond theory. From there, they might offer us dry ground above those swirling accounts of the subject, some place of origin unmediated by the sign, some stable alternative to the instabilities and uncertainties, the ambiguities and anxieties, forever fetishized by theory. Something warm, then, that relieves us from the chill of dogged ideation, something concrete that relieves us from unnecessary abstraction. –Bill Brown, “Thing Theory”

We’ve designated four spaces within which to explore various objects of study, or, put another way, in which to locate object lessons: “Consumable Objects” (food, especially in the context of diet studies; clothing/textiles; the plastic and pictorial arts; weapons; whatever), “Ecological Objects,” “Social/Political Objects,” “Spiritual/Ethical Objects.” Participants in each session select their own objects—archive, body, cell, crux, book, encyclopedia, gene, map, matter/hyle, manuscript, memory, method, mind, museum, narrative, ontology, relic, saint, trope, word, whatever. (Note that some objects are more object-y than others: why and how?—and, given disciplinary differences, where?) Think about sessions as working groups, as demonstrations, speculations, hypotheses, and experiments that aspire to re-estrange the chosen object of study through a close reading or via any other technology either currently available or yet-to-be-imagined: distance studies, the new materialism, materialist history, a demography of things, a taxonomy of objects, science-technology studies, rhetorical readings of the embedded practices of scientists and humanists, thin and thick description—and let’s not forget the nominalists.

About six months before the conference, we’d like to select a text (primary and/or secondary) or a clutch of essays that everyone might read in order to develop a common vocabulary, a set of touchstones, for reading and conversing and realizing our Venn-diagram worlds.
Posted by Eileen Joy at 1:03 PM

I really like the idea of making the focus of the conference the exchanges and potential exchanges between scientists and those working in the humanities. It will therefore be important for scientists (academics and other) to give papers, participate in roundtables, etc. Might be a good idea to start lining up specific people and asking them, to make sure they can come. I’d also favor some performance artists who work across the body/technology divide (e.g. Stelarc). I’m not entirely sure about the “objects” focus, however. I know that the object is de jour, but a) I don’t know if it will be in 2 years’ time; b) it doesn’t spark debate -- there’s no point of contention about objects (we all agree there’s been a “turn to the object”). But we need the conference to generate multiple – and opposing – viewpoints. Maybe the call for papers needs to point out how a focus on objects will do this? I’d also like there to be questions after every plenary, even if that means having fewer plenary speakers. The critical conversation is what’s important.

Ruth: thanks for your comments here, which I think are very astute. We will, of course, work very hard to involve scientists, which is why the conference will likely be hosted at both Northeastern *and* M.I.T., where there will be many scientists to confer/confab/dialogue with, and we're even thinking of a visit to the Artificial Intelligence lab there. I take your point about not tying in the theme too tightly to the rubric of "objects"/things, which could nevertheless form an important thread. I very much like Kathleen's posing of shared concepts/schemata/objects/metaphors between the humanities and the sciences and the possibilities for opening dialogue and debate around the poles of those entities & structures.

Ruth anticipated a few thoughts I had, and I have shared the CFP with a friend here who is a neuroscientist who actively has actively worked with humanists in collaborative teaching and now writing projects. I will get back to you all with thoughts if/when he gets back to me, but my initial thought is that the "objects" focus might not immediately resonate. I agree with Eileen that Kathleen's focus on the shared concepts and metaphors is a good one, and wonder whether that can be maintained under a different rubric. I'll ruminate on that further, as well. MIT is an invaluable local resource for the conference. Devorah Sperber, based in NYC, is an interesting artist working with science, technology and vision (http://www.devorahsperber.com/thread_works_index_html_and_2x2s/6_portraits_index.html). I wonder whether it might be interesting to spur some artists (including poets?) to create in and around the themes or ideas, to weave new work that could be presented at the conference. Anyway, I look forward to the unfolding exchange...

Ashby: thanks for these further comments and the link! We are definitely keen on having artists present and there is already one novelist who writes on scientific themes who is planning to put together a panel of writers [fiction and poetry] and scientists who also write creatively. I would also like, since we have enough lead-time, to see some film shorts and other performance-type presentations, for sure.

I was trying to figure out how to avoid talking across each other, and to actually do something. If we ditch the "objects" part, do you have any other ideas for generating collaboration? Perhaps it's all IN the collaboration--how certain folks get put together by us . . .