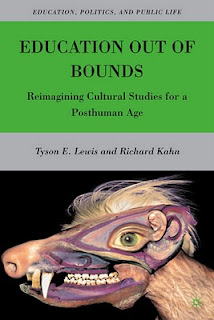 
Here the prefix “exo” designates the beyond, an education out of bounds, whose loca- tion resides at the very limits of the recognizable—where we learn to study the zone of uninhabitability that indicates the untimely arrival of a swarm of monsters and strangers. It is, in other words, a peda- gogy that concerns the sudden appearance of “strange facts” (Daston and Park 2001) that exist beyond the field of common sense. If mon- sters have traditionally been banned from philosophy as dangerous obstructions to be sacrificed or as mere illusions (Kearney 2003), then so too has education more often than not been involved in projects that (a) repress the monstrous within or (b) project the monstrous onto the outside world ... Exopedagogy helps us navigate the various narratives of the mon- strous emerging from our state of phantasmagoria—reactionary mon- sters, commodified monsters, and creative/constituting monsters. At its best, exopedagogy utilizes the bestiary in order to intensify the savage and zoömorphic vectors of a radical imagination beyond the law of the community (the sacrificial strategy), the law of capitalism (the expropriation of surplus-value), and the law of the human (the anthropocentric valorization of human creative power, linguistic pro- duction, and cognitive capacity). In this sense, exopedagogy is both savagely critical and creatively posthuman—producing new political narratives emerging from seemingly uninhabitable terrains.

Heady stuff, isn't it? The quotation is from Tyson Lewis and Richard Kahn in their new book Education Out of Bounds: Reimagining Cultural Studies for a Posthuman Age. The authors were kind enough to send me a PDF of their preface, introduction, and "Intermezzo" (on Marx as a bestiary: Medusa, vampires, and werewolves are featured, among other creatures). Though neither author is a medievalist, they make ample use of work by those who are. This book will appeal to anyone interested in posthumanism or the history of monsters. Its three chapters examine feral children, reptilian aliens, and faery realms, all in theory-savvy ways. What's most challenging of all, though, is their call to make teaching spaces -- not just classrooms, but public spaces -- zones for uncanny happenings, affective communal undertakings, uncomfortable becomings, and the intensification of the "savage and zoömorphic" imagination.
Posted by Jeffrey Cohen at 8:15 AM