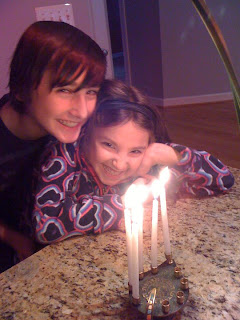 By an ancient tradition that, I'd wager, isn't really all that old, a child receives one gift on each of the eight nights of Chanukah. The first and last might be significant, but the others tend to be trivial things: clothing, candy, tchokes. For Katherine, our six year old, even the socks are Best Gifts Ever. For Alex, the disaster of trying to provide eight appreciated but not extravagant gifts last year means that this time around he was finished with presents by night #2. I don't think he feels shortchanged: he received a video game he really wanted, as well as the extra game controller he'd been hoping for. Alex has also just returned from ten days as an exchange student in Bordeaux, where he lived with a family fond of cooking gourmet meals. The exchange program is administered through our local public middle school, and included a tour of Paris with his teachers and classmates. He does not lead a meager life.

Alex's aging out of Chanukah's childish delights has given me food for thought this weekend. He feels connected to the holiday, with its nightly candles and food traditions (latkes, jelly donuts, chocolate coins) -- much more so than to, say, Thanksgiving, which he missed while in France. But the menorah is hardly lit before he is off to text the girl who is NOT his girlfriend or to seek the solitude of the basement or his own room. He closes his door. He keeps a portion of his life private from us. All of this is normal: a thirteen year old not attempting to reserve some experience and not experimenting with how to reconfigure relationships to family as he matures would worry me. Along with this growing up, though, comes a routine rolling of the eyes at the vast stupidity of the adult world, and emotions that blow in squalls and sudden tempests. Sarcasm has supplanted youthful sweetness. Saying good-bye to Alex as he departed for France wasn't easy: from the moment we arrived at the airport, he was withdrawn. He violated all the rules of social interaction that we have inculcated since he was tiny. Even his au revoir hug carried with it the feeling of OK now leave me alone already.

But then the next morning Alex called my cell phone to tell me that he had arrived safely in Bordeaux. His voice was vulnerable, small. I wanted to hold his hand ... I knew he was undertaking an incredibly brave journey, residing with a family he had never met and speaking constantly a language that he has studied only for two and a half years. Yet in a fashion typical for our young man these days, he left his camera at the hotel in Paris, and so we have no glimpse of his adventures other than the rather undetailed narratives he has given -- mostly focused on laser tag, soccer, and late night poker games.

Alex has always been a good student. This year, though, he struggles. Organizational skills fail him; procrastination is his dominant mode. We don't like to nag him and we don't want to be the ones who take charge of his schoolwork schedule. We've let him live with the consequences of his decisions (including lower grades, and then as a result the loss of an internet connection on his computer and in his video games so that he will not waste so much time). Sometimes, though, arguing erupts because of his moodiness ... and ours. Though we realize that the best method of dealing with a teen is to disengage from the escalation that even simple interactions can engender, that cut isn't always easy to put in practice. We remind ourselves that his emotional maturity in no way approaches his growing physical maturity (he will soon be as tall as me, and he shaved for the first time a few weeks ago). We reassure ourselves that the adolescent brain isn't always wired for rational decision making, and what seems obvious to us does not to him. We know that his hormones are raging and his body keeps changing on him: that has to be disconcerting. If 13 is this hard, though, I dread what 15 and 16 will bring.

Interestingly, facing these problems of pubescence with Alex has made me a more emotionally level teacher. As kindhearted as I like to think I am, I'm also quite strict: I'm never really interested in student excuses, except for medical and true personal emergencies. I have a hard time not taking it personally when someone misses deadlines or turns in half-hearted work. Don't get me wrong: I've not suddenly transformed my requirements to make it OK for assignments to be missed, but now I don't become as angry or as disappointed by such acts. I realize that my students are thinking like, well, adolescents: procrastinating, making the wrong choice, experimenting in how to be an adult, or seeing how much of the disciplinary and maturation machine that pedagogy is a part of can be avoided. The consequences are still the same (an F for the missed work, a calling to accountability in the paper comments), but my emotional state while bestowing such statements of failure is more even than it used to be ... and more hopeful of the future to come. Maybe not in my course, but some time, at some point, maybe very soon.
Posted by Jeffrey Cohen at 3:58 PM

Thank you for that careful and cogent blog dealing with your Alex. In this mind-blowing period of 13 for our son it is way more mind-blowing, I think, for the parents! Nice to know there is a community all engaged.

Why does this remind me so much of my 2-year old daughter? I thought I had at least 10 more years before she'd be shouting "go away!" and slamming her bedroom door. I suppose it's difficult, at any age, to come to terms with the world.