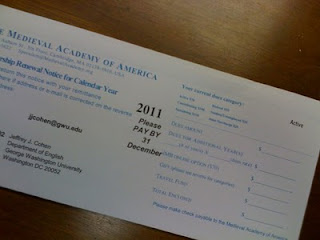 If you've seen the Top Ten Medieval Stories of 2010, you know that number four is "Medievalists upset over conference in Arizona." A link there brings you to the earlier story on Medievalists.net, featuring an interview with yours truly, about the open letter to the MAA we posted at ITM. In the interview I state:


"I've been a bit surprised at -- and heartened by -- the passion medievalists have brought to the discussion. Despite the fact that most of us study a time period a millennium away, we obviously care deeply about contemporary social justice. Some of the comments made in support of not holding the annual meeting were personal, and affecting: one from someone who'd grown up in apartheid South Africa and seen how a boycott could work; another from someone who'd suffered from being labeled an alien herself.

"But I also liked that despite the way this Arizona law makes many of us feel, the discussion has been cautious and mainly level-headed. People have emphasized the complexity of the situation, and most trust that the MAA will make the right choice here. So it's good to see the confidence in the integrity of our professional organization and its elected leaders."

Rereading that last line renews my sorrow that this confidence was misplaced. The MAA is holding its meeting in AZ. You'll remember that the open letter posted here at ITM gathered 171 signatures. Prominent medievalists circulated letters of their own (e.g. and also e.g.). At first I thought that even with the decision to keep the conference in Arizona I would renew my membership. Then I learned this, and this.

The MAA's decision to hold its meeting in the state, and its arriving at this decision in a way that was not in the least transparent, leave a bitter taste. When my membership renewal form arrived a few weeks ago, I opened the envelope and let the paper sit upon my desk. I've been a member since I was a graduate student, I kept thinking. I have to renew. But after two days, moving that renewal form from my desk to the recycling bin turned out to be quite an easy act to undertake.

Good-bye, MAA. At least for the time being.
Posted by Jeffrey Cohen at 7:50 AM

renewal form still on my desk, and I'm afraid I'll likewise be dropping my membership, at least for now. The recent banning of ethnic studies in Arizona seals my decision.

Frankly, I forgot to renew my membership one year in about 1980 and it took me 5 years to figure it out. I haven't been a member since.