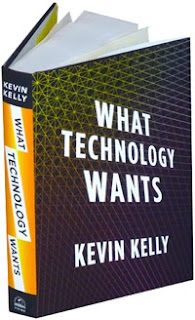 You will have gleaned that I am somewhat interested in the agency of objects. I'm especially intrigued by the ability of the inhuman to desire ... and so I could not resist Kevin Kelly's new book What Technology Wants. The book clearly wanted me to read it.

And I did. In straightforward and lively prose, What Technology Wants explores what Kelly calls the technium, the "greater, global, massively interconnected system of technology vibrating around us." The technium includes not just material objects like computers and hammers, but the web of relations which generate them and within which they operate, including software, philosophy, art, law, human and nonhuman creativity. Our desire for technology and technology's desire to reproduce and complexify are all part of this autonomous and rapidly proliferating form of life -- where life is not so much an entity but a tendency.

In Kelly's account, the technium's desires are discernible in its trajectories, patterns, and tendencies. They are rather comforting desires, because they are recognizably human. The technium, Kelly writes, wants complexity (the evolution of biological and technological entities both share an evident tendency towards more complicated forms); diversity  (taxonomic forms proliferate over time, with reductions in diversity always temporary); specialization (multiple entities for multiple tasks, sometimes forming superorganisms like ant colonies or space ships, sometimes not); ubiquity (self-reproduction ensures spread to every possible environment); freedom ("unconscious free-will choice," Kelly argues, characterizes even the nonhuman; he cites John Conway's work on the free will of subatomic particles, and equates maximum free will with maximum number of available choices -- that is, agents that desire freedom proliferate choice); mutualism (parasitism, coevolution, conviviality, symbiosis [he doesn't use the word cyborg, probably because technology can also desire mutualism with other technology; it is indifferent to the organic/inorganic split]); beauty (the most problematic of the desires, since beauty seems at times the equivalent of complexity, at times a product of a kind of reductive evolutionary biological determinism; it too easily becomes a synonym for the good; however he does allow that beauty can be useless, nonteleological); sentience (he maps how plants and ant colonies exhibit a kind of intelligence, and argues that "The technium is rigged to birth minds ... Technology wants mindfulness" 328); structure (which actually means facticity: technology wants the order and strength of connection that is truth); evolvability (like all life, the technium wants to adapt, increase its opportunities, emerge in new forms).

Kelly differs from many of the philosophers of science I've invoked previously here at ITM in that he does not see the technium as inherently dependent upon the cultural or the natural: it's not a hybrid form, as in Bruno Latour's account (Latour believes only in hybrid actants; he'd never allow the separability that Kelly posits). Just as the rocks and gases of early earth were left behind once self-reproducing organic life proliferated, the technium is now proliferating in ways that might leave the organic to its own slow motion and superseded endurance. Kelly does not worry about such independence and increase. He's a utopianist at heart, with a firm faith in progress and the amelioration for all that comes with increased possibilities and choices. For this reason, I think, we hear very little about military technology: no nuclear weapons, computer viruses, guns. What technology wants is a list of Good Things that even a traditional humanist could approve, since they all seem so ethical, so human. Kelly provides a reassuring narrative, because it is so familiar. Let me put this another way. You won't find on his list the most troubling of our very human desires and trajectories: to dominate; to destroy; to create hierarchy; to maximize individual gain at the expense of collective welfare. Shouldn't technology be allowed to demonstrate these unsavory trajectories as well? If the technium moves towards beauty, can't it also move towards the extermination of that which competes with it for hegemony?

Kelly might argue that the technium's desire for mutualism builds in a certain self-regulation, the potential for an ethic of unselfish regard, but it's not a topic given much consideration. Kelly is an unabashed progressivist  (chapter five is on "Deep Progress," how a movement towards what could only be called complex betterment is inbuilt in the fabric of the universe; chapter 6, on Ordained Becoming, is much better in that with less humanistic fervor he describes some recent work by biologists that demonstrates the kinds of destinies built into life forms by primal forces). The technium benefits all humans by

Towards the end of the book this profession of faith that world is getting better all the time becomes a quiet deism ("we can see more of God in a cell phone than a tree frog" 358).

Kelly loves the idea that biological complexity derives ultimately from the "exotropic self-organized systems [that] teeter on the edge of persistent disequilibrium" that came into existence with the Big Bang (275-76). You would think that this desire to tie the organic to the primal materiality of the cosmos would lead to a vibrant materialism, but not so much. The book is full of lines like "The oldest bacteria eke out their livelihood from lifeless rock, water, and volcanic fumes. They touch only inert matter" (311). But if matter is disharmonic star stuff animated by Conway's notion of inhuman free will, then such a line is simply careless: though it moves far more slowly, we can discern in the inorganic many of the same trajectories that Kelly discovers in the technium ... as well, perhaps, as a welcome indifference to some as well.
Posted by Jeffrey Cohen at 9:20 AM

Huh. I am chary of this, but look forward to reading it.

Two useful correlatives: one dizzily enthusiastic and corporate (http://www.youtube.com/watch?v=sfEbMV295Kk), and one older, but less starry-eyed about the potential outpacing of the organic by the mechanic (http://www.wired.com/wired/archive/8.04/joy.html)

Excellent review! Clearly, it has been determined that I will read this work. Thanks for the post.

Like Martin, I'm a bit chary (great word!) of the book, but also looking forward to reading it when the dissertation is finally done.

What's particularly interesting for me is that in my MA Seminar (six years ago -- how the time goes) with Cliff Siskin (now at NYU), one of our weeks was on Kevin Kelly and his ideas. We were working more with what he'd done in Out of Control -- a quick perusal of the essay I wrote for the class notes that the concepts of the Technium and such were still very much in development. But I'm struck that like our class, you noted the weirdly mystical quality, or deism, that pervades some of the work.

Funny to see him come up here...thanks for the flash review!

This is not the first book on the subject. I recommend attention, if available in English language:
http://www.konyv-konyvek.hu/book_images/29a/172752429a.jpg