Idols in the East (and South): European Representations of Islam and the Orient [and Jews and Monstrous Races and the Christian Self], 1100-1450 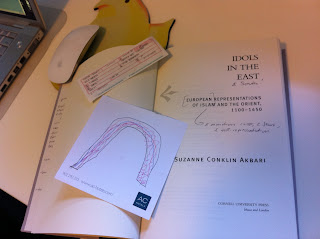 Suzanne Conklin Akbari's stunning book has been my traveling companion since last July. In the picture at left you'll see the train ticket I found inside (da Firenze a Pisa Aeroporto), and the rainbow my daughter drew for me in a hotel in Barcelona. A German exclamation on an interior page reminds me that it also flew to Berlin.

Below, my draft of a review. It's short, since I was constrained to 800 words (and what appears below already exceeds my allotment). In some more coherent form the review will someday appear in AHR.

Suzanne Conklin Akbari
Idols in the East: European Representations of Islam and the Orient, 1100-1450
“It is a truth universally acknowledged,” states Suzanne Conklin Akbari in this masterful new book, “that a modern theoretical paradigm in possession of wide currency must be in want of a medieval text” (5). Associated closely with the work of Edward Said, the paradigm to which she refers is Orientalism, a totalizing approach to mapping how the West fantasized its eastern Other. Idols in the East offers a profound challenge to this analytical mode, stressing that although a “specifically medieval orientalism” existed (orientalism is not an invention of eighteenth- and nineteenth-century colonialism), its modern version with its unremitting focus upon religion represents a “paradigm shift.” Akbari argues carefully and lucidly that western medieval constructions of Islam were anchored in two kinds of alterity, religious and geographical. Muslim soul and Oriental body together form the ubiquitous figure known as the Saracen. Akbari’s insistence that corporeality must be taken as seriously as theology is brought to an analysis of materials that, like these other binarisms, have too often been left to separate spheres. “Realistic” treatments of Islam in the scientific works of the Middle Ages has, following Norman Daniel, traditionally been separated from “fanciful” representations of Saracens in popular materials like chansons de geste. Akbari refutes this idée fixe, demonstrating how supposedly heterogeneous views within these texts are dual aspects of a unified discourse in which Islam is insistently aligned with idolatry.
The bookends for Akbari’s study are First Crusade’s assault on Jerusalem and the Ottoman capture of Constantinople. Although the geographic, temporal, and generic terrain she covers is immense, Idols in the East is so well conceptualized that the argument never loses its focus. Epistemological and cartographic place are the recurring themes: location is everything. Chapters examine the fourteenth-century reorientation of the world in which a North-South opposition became West-East, with the torrid geography producing dark and irascible peoples, cold climates reasonable and fair Europeans; the displacement of wonders eastward into India, rendering that geography paradoxically one in which Christians encountered -- and sometimes lost -- themselves; the impress of climate upon the bodies of Jews, who were always closely related in the Christian imagination to Saracens but who were seen as “belonging nowhere but found everywhere”; the corporeal diversity of Saracens, with a productive emphasis on gender and the fate of children born into imagined mixed faith families; the narratives of idolatry and falsity through which Christians articulated Islam; and the knotty relationships among Muslim imaginings of heaven (especially as mediated through Latin and French translations of the Kitab al-mi’raj), Christian envisionings of the same space, and the charge that Islam was carnal and literal. At the heart of this culminating chapter is an examination of the profound challenge Islam posed to Christianity: was it a new law (in which case it was potentially supersessionary), or was it, like Judaism, a version of the old? The book’s conclusion briefly traces the orientalisms that followed 1450, making some intriguing connections to modern anti-Islamic episodes.
Clearly the book’s subtitle is inadequate. A truer to content description would have mentioned Jews, the monstrous races, and Christian self-representation: all of these topics are so fully covered that anyone who works on them will want to consult the volume. Including a chapter on “The Place of the Jews” is brilliant, since as Akbari demonstrates managing Jewish difference was essential to the creation of Christianitas and furnished a template for the representation of other alterities – even if the diasporic body of the Jew posed challenges not mounted by the emplaced Saracen. Of course, there could always be more: Akbari typically refers to “the Jew” as a singular, masculine noun. The discussion of Saracens, on the other hand, includes a nuanced exploration of gender, especially in the challenge posed by the Saracen princes of the chansons and romance. Climate dominates over other potential determinants of racial identity. Akabari states in her introduction that hers is not a project in which the Saracen or Jew might “write back,” since the book is centered upon “European representations of what is strange and distant” (10). Yet some of her copious materials derive from pluralistically inhabited spaces, or were written by those who moved through them (especially the post-crusade Holy Land). I wondered how different the book would be if it had allowed for an “answer back,” or at least for a convivencia in the complicated sense of shared space of frequent antagonism, mutual influence, argument, and conversation. Like Said before her, though, Akbari is less interested in mutuality than in forceful Western discursive constructions. But not always: her treatment of Dante’s use of Arabic materials (as mediated through translation) and Roger Bacon’s wrestling with Islamic philosophy are nothing short of remarkable in their sophisticated unraveling of intellectual debts.
Idols in the East is the culmination of two decades of research. Ambitious yet careful, provocative yet admirably well researched, the book now stands as the best treatment of Islam in the medieval Christian imagination that we possess. It will not be easily superseded.
Posted by Jeffrey Cohen at 3:14 PM

Muslim soul and Oriental body together form the ubiquitous figure known as the Saracen.

One of the things I've never been quite able to work out in my own materials is what to make of apparently-Christian persons in frontier Spain actually called Sarracín (or Mauro). I could use a theoretical handle on this, since the onomastic literature appears unable to provide a historical one. My question, therefore: is that handle herein? Or is this solely about the Oriental Orient however conceived?

Jonathan, the quick answer is no: the book focuses mainly upon how literature, encyclopedias and theology imagined the Saracen. It isn't really about "on the ground" experience of say, the legal sorting of identities. The frontiers are mainly as imagined, rather than the actual geographical spaces.

Which isn't to say that you won't find of great value here; I'd recommend the book to anyone interested in relations among Christians, Jews and Muslims.