de monstro possunt fieri monstruosae quaestiones, or, an apology for an omission 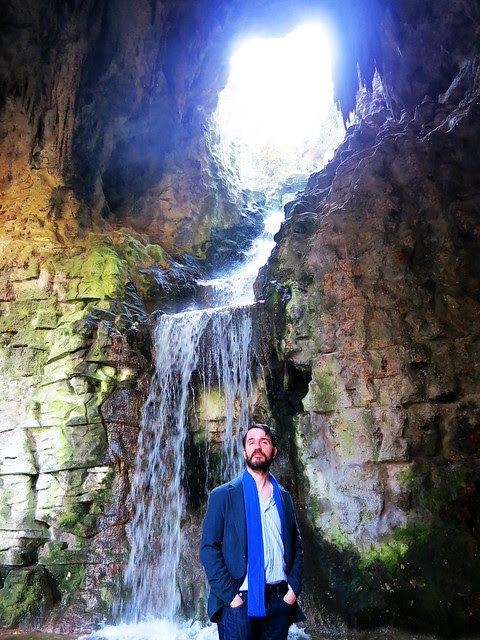 by KARL STEEL
(image: your humble, monstrous blogger, in a mystery spot)

I've spent the last month, not blogging, obviously, but rather hitting a tight deadline to produce 6k words about skin. Depending on reviewers, publishing schedules, and our developing environmental eschaton, you'll see what I did sometime in...2014. Maybe sooner. Unless I paraphrase some of my ideas here first. For now, let's just say that I had a lot of fun conceptualizing skin through object-oriented philosophy rather than psychoanalysis (those prices!). In essence, I was looking in instead of (inside my skin) looking out.

But today I'm here to confess something. I'm proud to have an essay in The Ashgate Research Companion to Monsters and the Monstrous on "Centaurs, Satyrs, and Cynocephali: Medieval Scholarly Teratology and the Question of the Human." I'm also ashamed, though, because I somehow missed an important essay, Maaike van der Lugt's "L'humanité des monstres et leur accès aux sacrements dans la pensée médiévale" [The humanity of monsters and their access to the sacraments in medieval thought], available for download here. I'm ashamed, because it's a great article, but also because I'm a big fan of her work on barnacles and because her book on WORMS (hello!) somehow didn't get cited in my worms paper. That will be corrected.

So, apologies, Professor van der Lugt, if you happen to be reading this. I hereby swear to follow your career with interest.

In the meantime, if your French is pas si bon (and--the Parisians know--mine is barely enough to get by), I'll summarize some of my favorite bits from it, starting with the last line, a kind of punchline from Hugh of Pisa: "de monstro possunt fieri monstruosae quaestiones" (23 n91; concerning monsters, monstrous questions can arise).

The article concerns itself primarily with the baptism of conjoined twins and the ordination of intersexed people, mapping the differences and overlaps between canon and civil law (the former concerned with the sacraments, the latter with inheritance and paternity). It occasionally touches on disability, pygmies (included mummified pseudo-pygmies, traded by merchants), and the heterogeneous offspring of bestiality. Needless to say, discussions of monsters inevitably mean discussions of the so-called norm: questions of gender determination, for example, are universally applicable in a society--like theirs, like ours--that divides so much labor according to gender roles.

So. The article opens with two accounts of conjoined twins, one near Florence in 1317, the other in 15th-century Paris, the first denied baptism as a bad omen, the other baptized (as Agnes and Jeanne) shortly before they died; their body would be displayed for three days to the people of Paris (see here, item 508). Fascinating! Here follow some of my favorite bits:
There's much, much more, particularly in the footnotes. If your French is up to it, and you're into monsters, gender, and the human as a question (and if you're reading this blog, I suspect you are), then this is an article you'll love. Highly recommended.
Posted by medievalkarl at 3:44 PM

Oh no I don't speak French! I have a three track mind apes/fauns/satyrs, barnacles and wild men. Discussing some aspects of Irish law in relation to hairy things and cargo cults last week reminded me that I really need to look at cannon law and theology in relation to wild men and apes. Whole new subject for me and I have been lazy. This is rather motivational as the importance of the subject becomes somewhat crystal clear.

Will you be running with this further I suspect it could prove crucial in resolving a few issues?

I can at least look forward to reading you're own article!

Post could not have popped up at a better time. Magic!