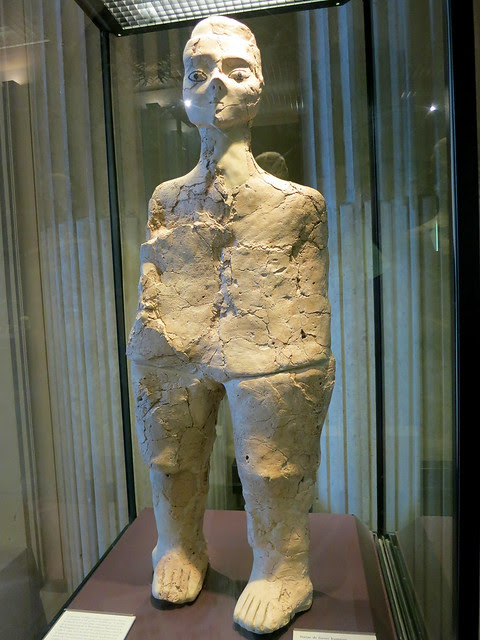 All best to all my friends in Boston for the SAA Conference in Boston. Cause some trouble; let yourself be troubled.

Above is a picture of the oldest work in the Louvre, a 9000-year-old statue of a human, made from gypsum plaster smeared over a skeleton of cords and woven fibers, with pupils and eyelids of bitumen. It was most recently rediscovered in 1985 at Aïn Ghazal, restored at the Smithsonian from 1985-96, and is currently in Paris, on loan from from Jordan (for more commentary, see here).

My second thought on encountering it was: hello, Adam:

And I said unto the Cherubim, 'My Lord, of what kind was this righteousness wherein Adam was arrayed, and which he received from His hand?' And the Cherubim said unto me, 'On the day wherein God created Adam, Adam was twelve cubits in height, and six cubits in width, and his neck was three cubits long. And he was like unto an alabaster stone wherein there is no blemish whatsoever.'

I'm quoting from the Coptic The Mysteries of Saint John the Apostle and Holy Virgin, an early twelfth-century celestial journey in which we find, let me stress, a wholly coincidental description of what might as well be the Aïn Ghazal statue.

[I] called a 9000-year-old object [the] oldest in Louvre. How very anthropocentric of me. We're full of star dust.

The amazing thing is that every atom in your body came from a star that exploded. And, the atoms in your left hand probably came from a different star than your right hand. It really is the most poetic thing I know about physics: You are all stardust.

Possibly to its credit, the Louvre calls the Aïn Ghazal statue its oldest work, not its oldest "object" (possibly: I don't perfectly remember what the placard said). Nonetheless, even "work" still presents human agency as the only agency that matters. Anyone reading this blog knows anything can "work." Even exploding stars.
As for age, even if we bracket off stardust, the statue's primary material itself still strikes me as almost impossibly old: gypsum has been here for perhaps 2.5 billion years. What can we do with such a big number, so much more vertiginous than the vague, transcendent non-number of the infinite (on this point, see The Ecological Thought 40: incidentally, can I declare a moratorium on "infinite"? In a universe that matters, nothing's infinite).

And then there's my delight in the statue. Like my delight in manuported pebbles, carried by humans or proto-humans millions of years ago, I delight in feeling myself sharing the touch that shaped this statue 9,000 years ago. Look at it! You can see where hands worked it. Can't you imagine touching it too?

Yet isn't this an anthropocentric delight? Especially with this statue, which, after all, looks back at me with a human face? Proper disanthropocentrists should take at least as much delight in the age of the gypsum, in the statue's unseen armature, and in the stardust that we once were and will be again.

My call for an expanded delight isn't a call to overcome narcissism. That's too easy, and ultimately too humanist. I'm not advocating that we all abandon our training as humanists by learning to take delight in something other than the human or its products. I'm advocating something more complicated, directed against the loneliness of traditional humanism.
I'm advocating that we recognize ourselves not only in this statue's face; that we cease to think of our singular humanity as the most interesting thing about us; that we develop, in short, a more expansive narcissism. (here's what that might look like)

We are all stardust, in part (93%, in fact). We share something with gypsum, and with ancient woven cords; we're perhaps future bitumen. At the least, we all exist, in some way. We all share this condition of being temporary configurations of matter. We can recognize ourselves in that existence. We can take an interest in the existence of others because of that self-recognition, and, through that narcissistic interest, feel our sense of self give way, or open up.
In sum, the statue's elements, too, are places where we might encounter an ancient face looking back at at an "us" that finally knows itself not to be only human.
Posted by medievalkarl at 8:10 AM

To what base uses we may return Horatio! Why may not imagination trace the noble dust of Alexander till 'a find it stopping a bung hole?