The Indistinct Human in Renaissance Literature 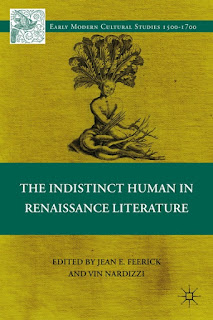 Vin Nardizzi kindly sent me a copy of this excellent collection of essays he has edited with Jean E. Feerick. I'm posting its table of contents here because many readers of ITM will want to peruse it. If you enjoyed the inaugural issue of postmedieval on the posthuman, this is the book for you. The introduction is superb: a piece on "Swervings" that is not about Lucretius! "We go back to these Renaissance materials," the editors write, "to locate possible futures" (5). The essays that I've read so far do just that.

Like all Palgrave books The Indistinct Human is overpriced ($90), and no ebook has been released. You can save 20% by ordering from Amazon, though (not that $72.01 counts as inexpensive). With its essays on animals, plants and stones, the book is also an unexpected complement to the soon to be released Animal, Vegetable, Mineral: Ethics and Objects (out before Kalamazoo via punctum; free as a downloadable PDF).

Thanks for this! It will be really useful and seems interestingly complementary to a lot of the work PM is doing. I do dislike that so many of Palgrave's (amazing) books are not available as e-books and cost so much money. Don't they realize they could actually make *more* money by having *more* people buy reasonably priced books? *sigh*

Here we are a year later and this book is on KINDLE for $72. Still more than this starving student can afford especially since I'm only interested in one article.