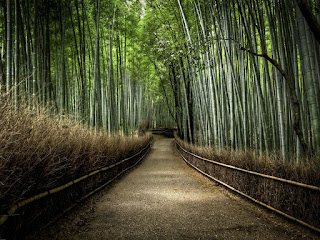 
How do we engage the crisis of flux while making space for contemplation? . . . We must see that our oikos is situated in the flux of time, an endless motion, while also cultivating a small space of slow time, a little hearth of contemplation.
--James Smith, "Fluid"

The roundtable session on "Ecologies," organized by Jeffrey and sponsored by George Washington University's Medieval and Early Modern Studies Institute [GW-MEMSI] for the 47th International Congress on Medieval Studies at Kalamazoo, Michigan this past May, was a more than memorable event, featuring lively, provocative, creative, and at times, both funny and somber, reflections upon the key terms designated by the speakers: Fluid (James Smith); Trees (Alfred Siewers); Human (Alan Montroso); Post/apocalyptic (me); Hewn (Anne Harris), Recreation (Lowell Duckert), Green (Carolyn Dinshaw), and Matter (Valerie Allen).

I have now (finally) posted an audiofile of the roundtable session, and you can access that HERE. I would also note here that this session's presenters will re-convene with each other at George Washington University this coming spring [April 5, 2013], joined by Ian Bogost, and that some version of these two gatherings will be published by punctum books as the second volume in the Oliphaunt Books series (the first volume of which is Jeffrey Cohen et alia's Animal, Vegetable, Mineral: Ethics and Objects). So stay tuned for that!

The session's presenters ranged widely, subject matter-wise and philosophy-wise, and I offer here a pastiche of some of the more memorable reflections:

Thank you SO much for doing this, Eileen.

For those who would like to mark their calendars now, this round table will reconvene in Washington DC on Friday April 5 2013. Ian Bogost will join us for the event and give a presentation of his own.

Thank you, Eileen--just in time for my Fall 2012 Ecocriticism and Early English Drama grad seminar.